The president spoke to a small crowd at the Electric City Trolley Museum on Cliff Street in the city. 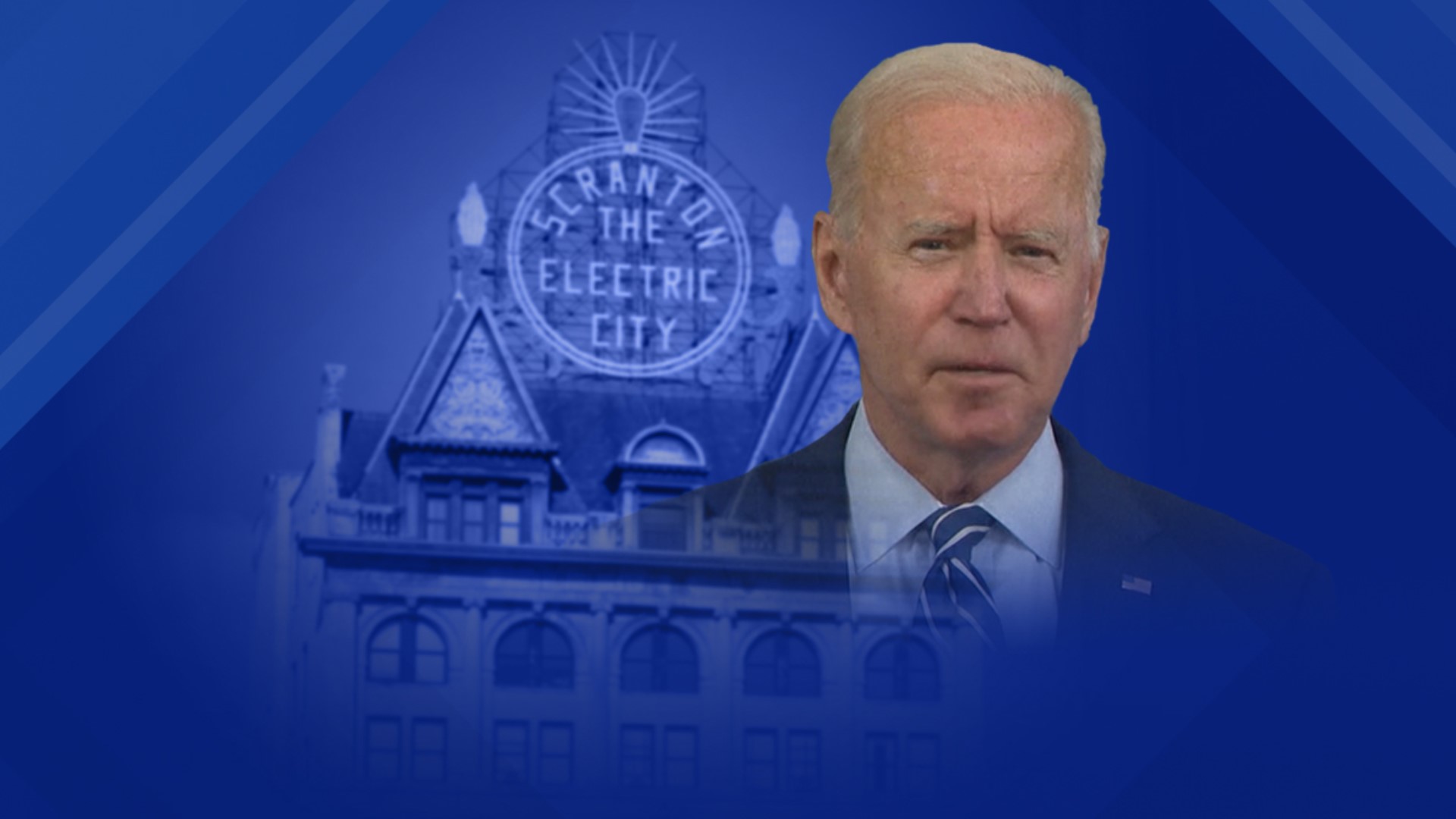 President Joe Biden says he came home because Scranton has shaped his policies as president.

"The truth is, Scranton isn't my home because of the memories it gave me. It's my home because of the values it gave me. So, when I ran for president, I came back to Scranton. I came back to Scranton, and I started here in Scranton. And I resolved to bring Scranton values to bear, to make a fundamental shift in how our economy works for working people. So I'm here today to talk about what's fundamentally at stake right now for families and for our country," President Biden said.

The president spoke at the Electric City Trolley Museum to an invite-only crowd made up of many past and present Scranton politicians.

"He knows our city inside out and upside down, and it's significant. He's going to come back; he's going to keep coming back," said Jim Connors, former Scranton mayor.

"Changing a couple street signs doesn't necessarily mean we're 100 percent embracing him being in the city. Although I think it's cool, I think it could be a first step into real progress and really building up the city and putting more attention, more dollars, more work into what we're already doing here. I hope that's what he sees, and I hope he actually invests into the city of Scranton," said Glynis Johns, Black Scranton Project. 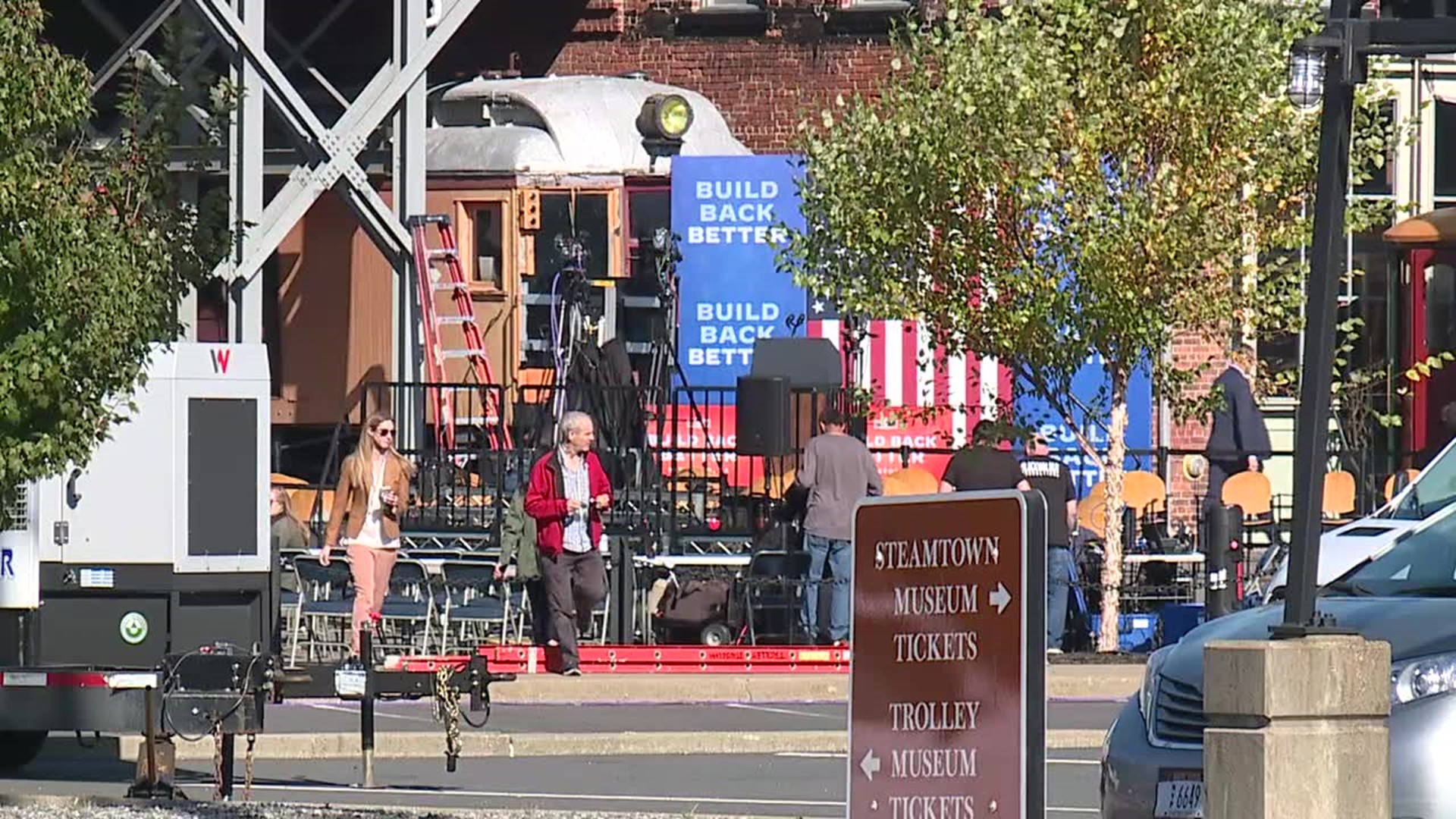 Pres. Joe Biden is making his first trip to his hometown of Scranton as president on Wednesday afternoon.

There was a lot of activity at the Electric City Trolley Museum ahead of the president's visit. A small stage was set up outside the museum.

There's some historical significance to this setting for his speech. The president is expected to talk about the infrastructure bill, which includes funding for roads and bridges and public transportation.

The Electric City Trolley Museum honors the history of transportation in Scranton. The city gets its nickname because this is where the first electric streetcars ran.

We spoke to some of the guests as they started to arrive about an hour ago.

"I'd really like to hear how he's planning on getting this bill passed so that we can start working towards this once-in-a-generation opportunity of infrastructure and spending on child care, paid family leave, things that are sorely needed in a place like Scranton," said Grace McGregor Kramer.

"He knows our city inside out and upside down, and it's significant. He's going to come back. He's going to keep coming back," said Jim Connors, the former mayor of Scranton.

Today, I’m heading back home to Scranton. It’s where my values — of hard work and treating others with dignity — were set. Those values are at the core of my agenda.

We spoke with the director of the museum, who said he and his staff have been working around the clock for four days to prepare for the president's visit.

"I got a phone call this past Sunday if I could report to the trolley museum, and I was greeted by 12 Secret Service people and seven White House staff. So, it was an interesting Sunday," Wayne Hiller said.

The trolley museum and the Steamtown National Historic Site are closed for the rest of the day for the event.

After Pres. Biden delivers his speech outside the museum, he will go inside for a tour.

"Show what we have to offer here for the public and just explain about the nice little attraction we have here," said Hiller.

The Breneman family came all the way from York for a tour of their own but were surprised by what they found inside.

"A lot of people in suits," Daniel Breneman said.

"Yeah, we thought it was the FBI that was here; we weren't sure," Kate Breneman added.

They're fans of the show "The Office" and picked the same day to visit the Electric City as arguably the most famous Scrantonian.

"We came for the Dunder Mifflin walking tour, actually, and there wasn't a lot open right now, so we decided to go to the trolley museum," Daniel said.

This is Biden's first trip back to his hometown as president.

"I've never met any president, and this is an honor to have him in our attraction but to meet him personally," said Hiller.