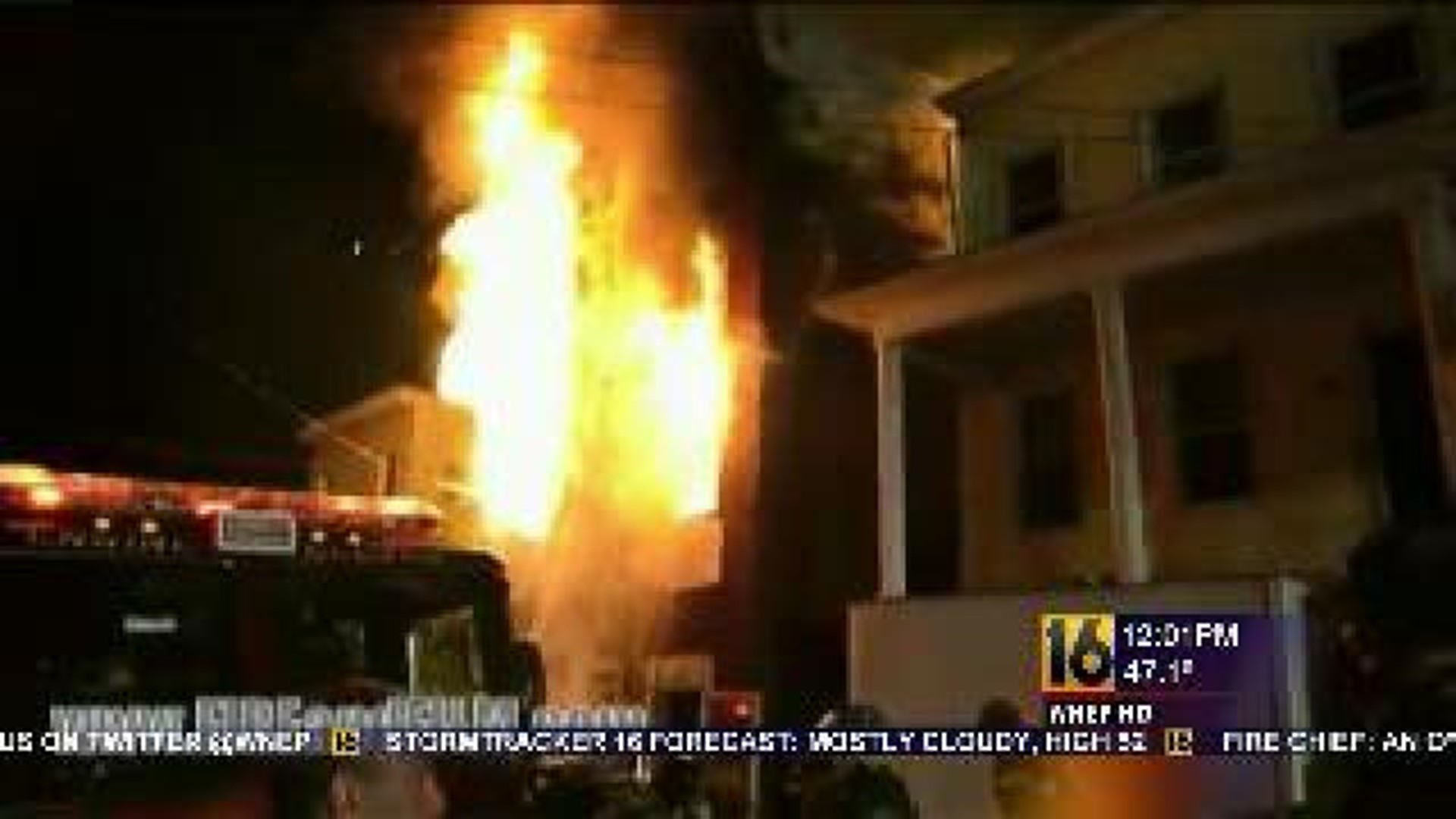 POTTSVILLE -- A family tragedy leaves an entire community in Schuylkill county in disbelief.

Four children and two adults are dead after a fire in Pottsville.

Investigators are now focusing on a wood stove as the possible cause of the fire. It was in the second floor kitchen of the three-story home on Pierce Street in Pottsville.

Six members of the family slept in bedrooms on the third floor.

Investigators spent hours going through the rubble on Pierce Street in Pottsville, looking for the cause of the fire that left six people, including four children, dead.

Home video shows what firefighters faced late Sunday night on Pierce Street in Pottsville: a home a mass of flame.

Christina Groves lives just behind the home that burned.  She recalled those first awful moments.

Groves gathered her family and got out.  They were warned by firefighters that the fire was out of control and it might spread. Neighbors, police officers, and firefighters braved that "towering inferno", as Groves put it, to try to rescue the six people trapped inside.

"They tried their best to get in and they just couldn't get in.  There was a mass of flames in the back of the structure, going up the outside and the inside," Pottsville Fire Chief Todd March. "We knew right off the bat that we had people trapped in the building."

Chief March calls this the worst fire in the nearly forty years he's been a firefighter in Pottsville.  Rescuers could not get in.

Firefighters say all of the victims were found on the third floor.  One adult and two children in the front, a child in the middle, and an adult and another

Chief March says water pressure in this part of the city isn't the best, but he believes the fire was burning for a time before neighbors noticed it, and water pressure was not a factor in the six fatalities.

"Nobody could get in there with that much fire in the back.  It was heavily involved in flames in the back of the structure, heavy smoke coming out the front.  They just couldn't make entry, there was no way," said Chief March.

Even though the chief feels the victims could not be saved, he and the members of his department take this personally.

"Once they knew they found a couple of the bodies, we just let a certain amount of guys in there and we said nobody else is going in. We don't want to expose them to that.  It's a sad situation, real sad."

Chief March says counselors will be available to firefighters.  Six members of his department were hurt.  The chief believes all will be OK.

"They tried so hard.  It was so on fire before anyone even got here," said neighbor Samantha Fanelli

A close friend and neighbor of Kelly Brown, the mother of those four little kids who died, says she was actually over at this home just across the street from her house doing laundry as her children husband and sister were asleep.  Just as she began folding the kid`s clothes, she smelled smoke, came outside only to find a wall of flames around her house trapping the people she loved inside.

The challenge for firefighters included narrow streets and steep hills. The ladder of a fire truck actually clipped off part of awning of a home as it made a sharp turn and headed up Pierce Street, two blocks to fight the fire.

Witnesses say a Pottsville police officer tried to get into the burning home. But overwhelming flames and locked doors in the front and basement kept him and others out.

For complete Newswatch 16 coverage of this story, click here.