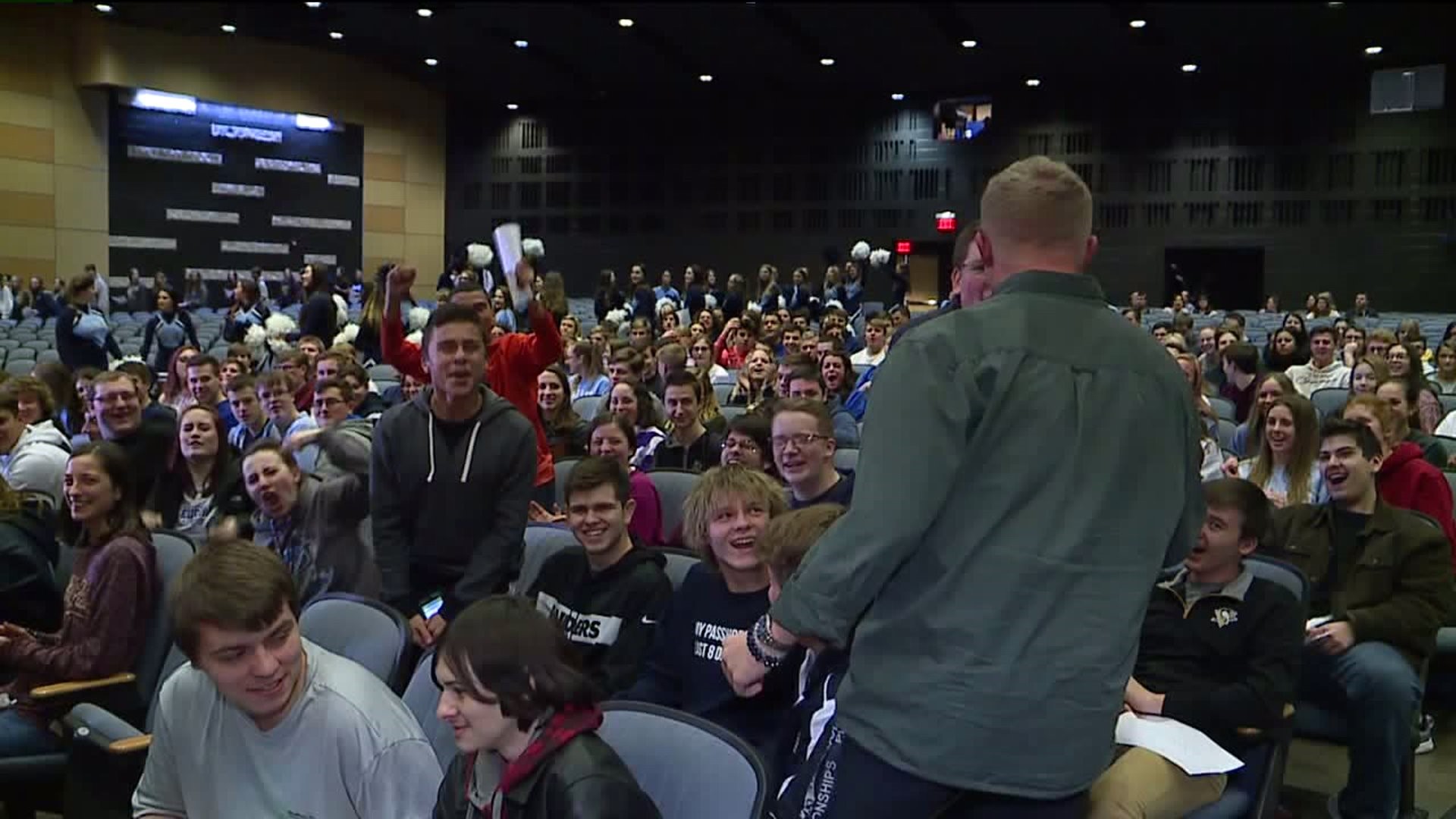 DALLAS, Pa. -- It's been more than two decades since the Dallas High School Mountaineers in Luzerne County have brought home a state football title. They're hoping to close the gap in the game on Thursday at 7 p.m.

Students packed the performing arts center inside Dallas High School for a pep rally as they send off their Mountaineers to Hershey for a chance at a state title against the Thomas Jefferson Jaguars from western Pennsylvania.

Seniors say they couldn't be prouder of the football team they've grown up with.

At the pep rally, coach Rich Mannello said the team couldn't have come this far without the support of the students, cheerleaders, and marching band.

"D Nation, we can hear you. We can hear you no matter what's going on on that sideline. We know you're there," Mannello said.

"It's amazing," said cheerleader Olivia Yourdon. "I honestly love it and the team is great. The band is great and it's a great experience."

As the players packed into the field house to get ready to head to Hershey, they tell Newswatch 16 they are in the right mindset to take home the state championship.

"This is what we've been training for since freshman year when we were 2-9. We always wanted to get one step closer and now here we are," running back Lenny Kelley said.

Even though the team is getting a full sendoff and traveling part of the way with a parade escort, the players say it's not going to let the excitement disturb their focus.

"We go out each week as it's one week at a time, and this week is the last week and we finally made it by doing what we're doing all year and that's just playing our game," Kelley added.

Instead of this month's special, "Go Mountaineers," "Good Luck Dallas,"  and "Hustle Hit Never Quit,"  are donning the signs of businesses in the Back Mountain to show support for the Dallas High School Mountaineers as they head to Hershey to compete for a state title. 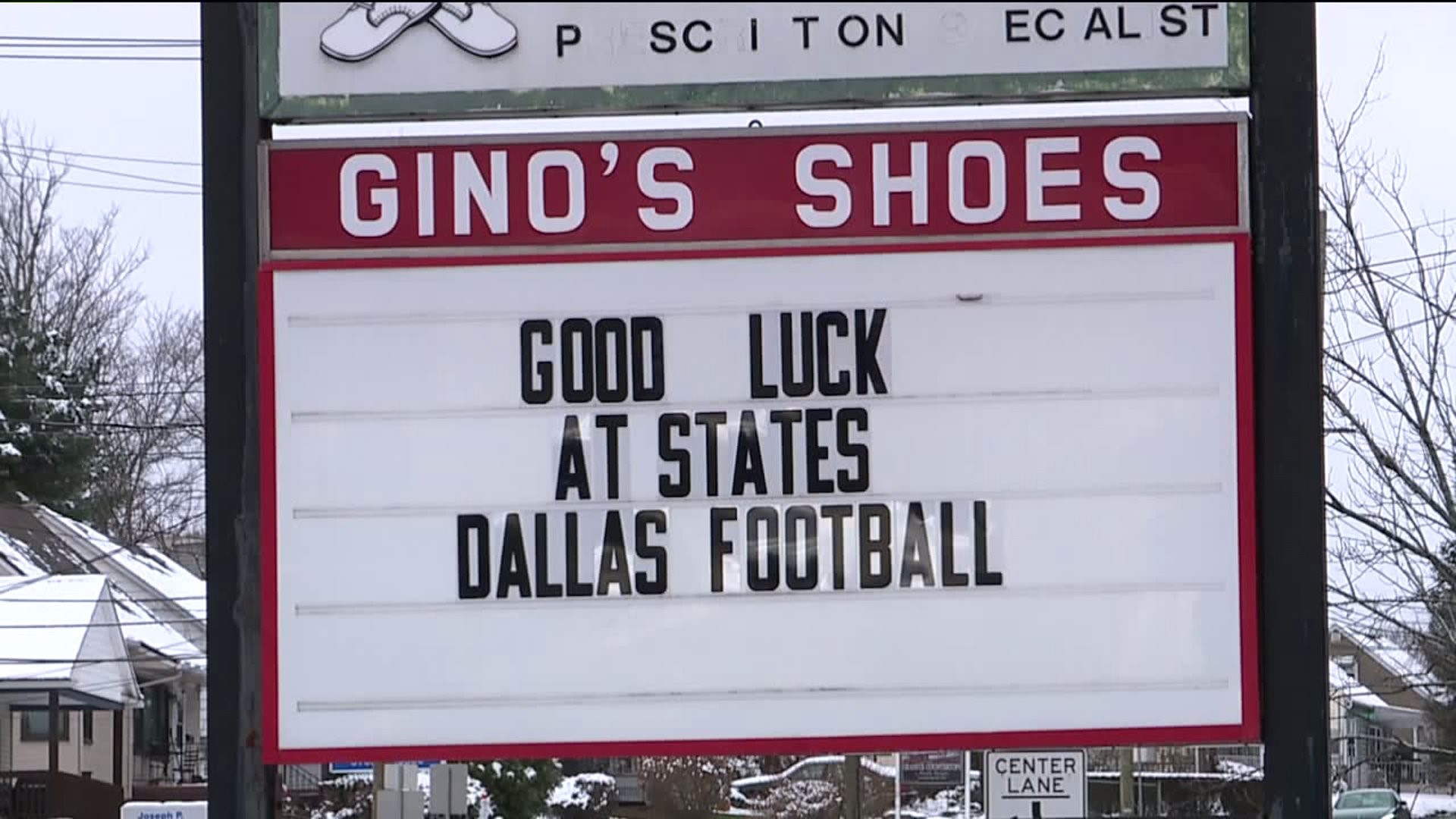 "I just see it as good community supporting a great team. They got a great team this year. I just hope they do wonderful and I hope they win it," said Mark Szot.

Joe Tomasino has streamers and balloons outside his restaurant, Tomasino's Ristorante Italiano. He says it's the least he could do for the boys as they work hard on the field.

"You got to aim to the top, you know? People keep saying this world is no good, this world is this, well you know what? I said look at these kids, that's our kids. And they are hitting the mountain, so you know? So we got to show them that we support," Tomasino said.

"That's what this is all about. It's about community, the greatest one in Pennsylvania!" said Coach Mannello to cheers from the crowd at the pep rally.

As the team heads to Hershey, folks in Dallas want to leave the mountaineers with some good wishes.

"Good luck and enjoy it, enjoy it. I think they will do well I have high hopes for them," said Tracy Crispell at Gino's Shoes.

"Whatever you're doing that you've been doing in every game, just keep doing it exactly that way," said Szot.

Wherever you go around Dallas, the message is the same: "Go, Dallas! Yeah!"

Kickoff in Hershey is 7 p.m. Newswatch 16's Sports Steve Lloyd is there and will have more from the stadium.