SCRANTON, Pa. — The city of Scranton and the surrounding area took a direct hit from Monday’s morning’s line of severe thunderstorms. Part of ... 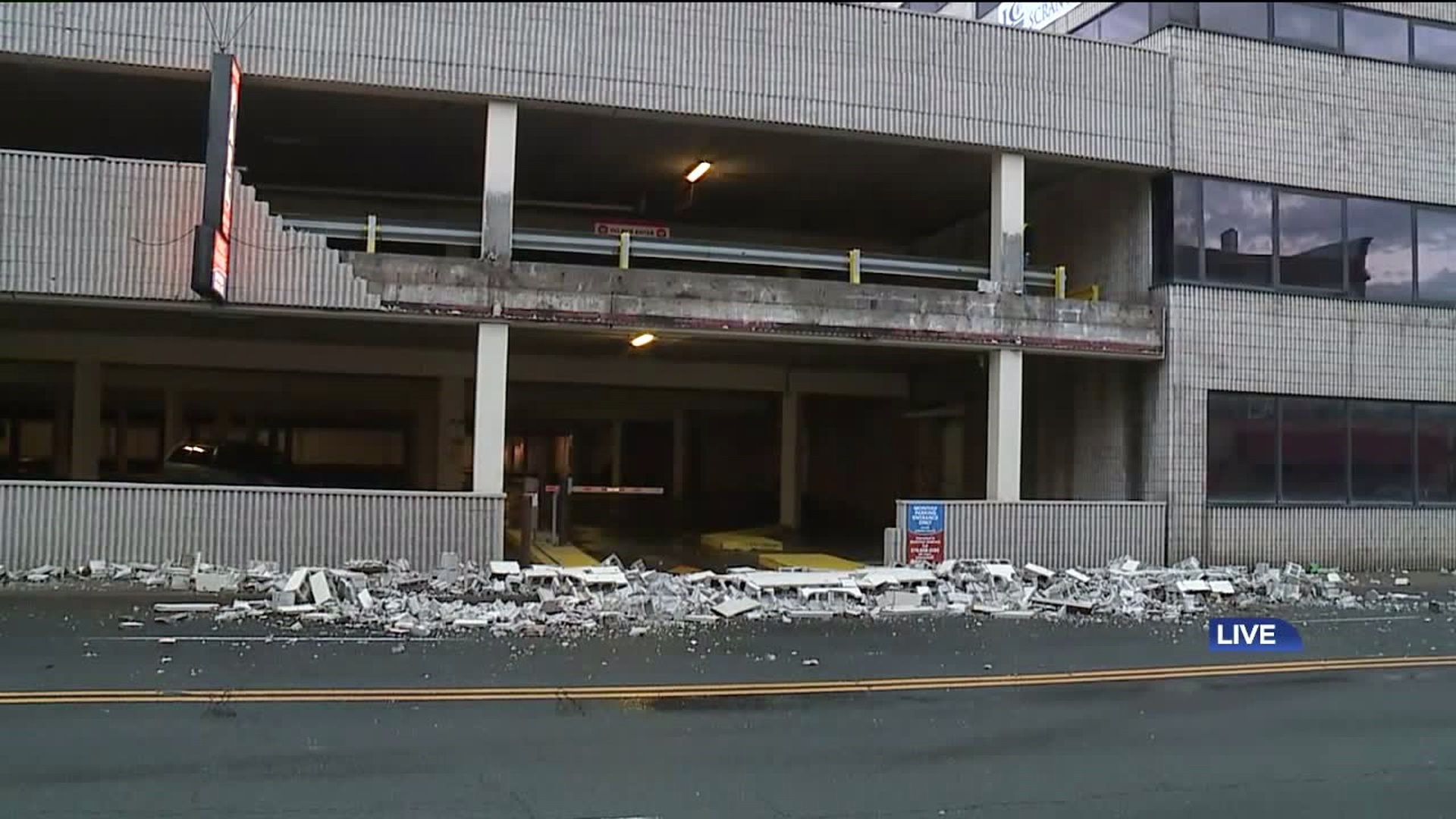 SCRANTON, Pa. -- The city of Scranton and the surrounding area took a direct hit from Monday's morning's line of severe thunderstorms.

Part of the facade on one of the parking decks on the Adams Plaza Parking Garage collapsed early Morning morning.

The stone landed on the sidewalk and on part of Mulberry Street.

Police and the Scranton fire department closed the 500 block of Mulberry Street.

Inspectors will check to see if other parts of the structure are also in danger of falling to the street.

Just a short distance away, parts of the hill section in Scranton looked like a war zone. Trees and power lines are down. Streets are closed, and hundreds of homes are without electricity. 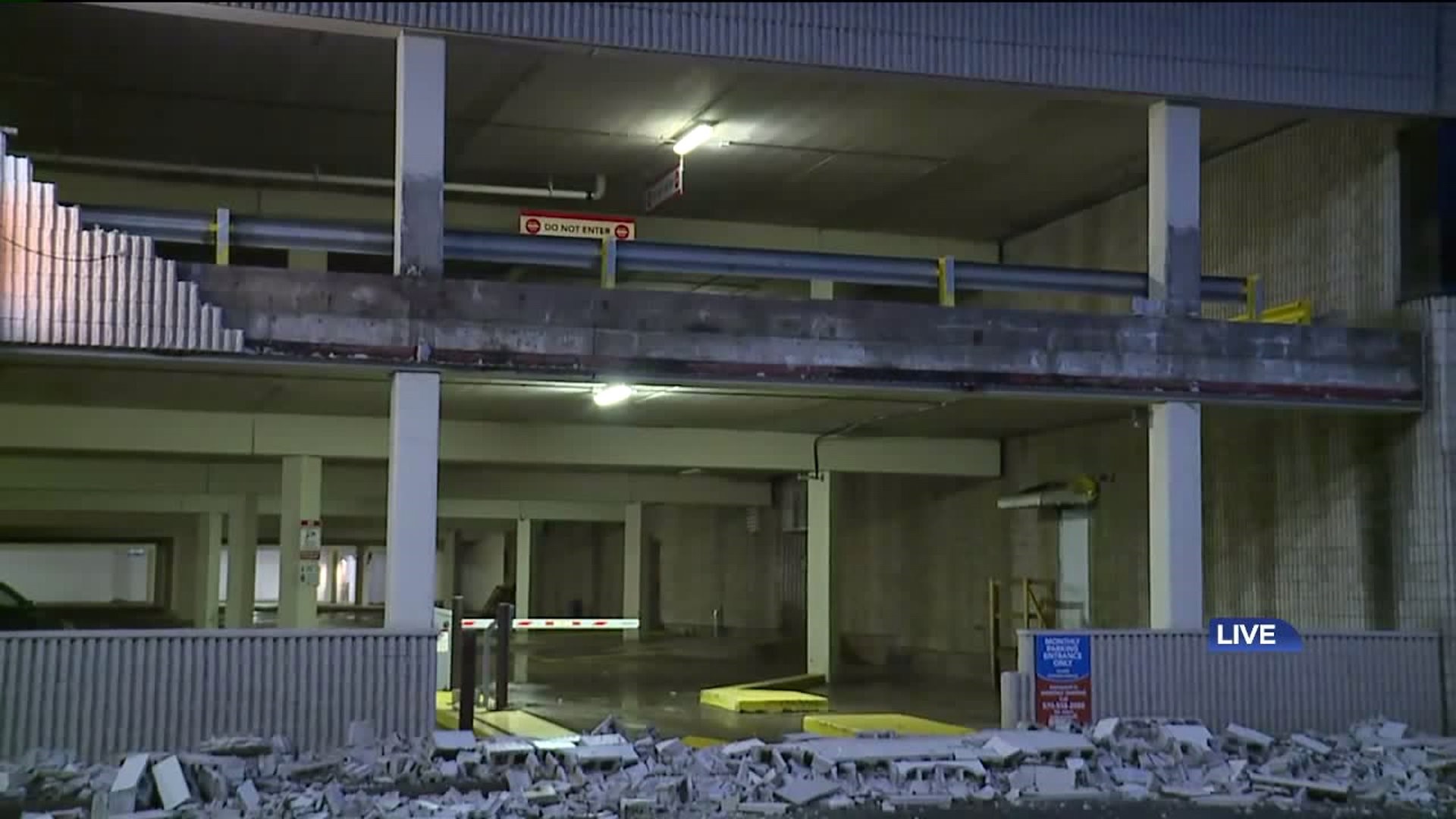 The same goes for south Scranton. The overnight winds took down tree limbs. Police had to close some streets, and drivers were forced to take a detour.

PP&L Electric has crews out trying to get the power back on.

The overnight storm was more than wind. It was rain. Poor drainage areas were flooded. Cars were stuck as drivers tried to maneuver through the high water.

Crews are asking people to avoid Moosic Street, Harrison Avenue, Wheeler Avenue, and the entire Hill Section of Scranton. Hospital employees will be allowed through the roadblocks. 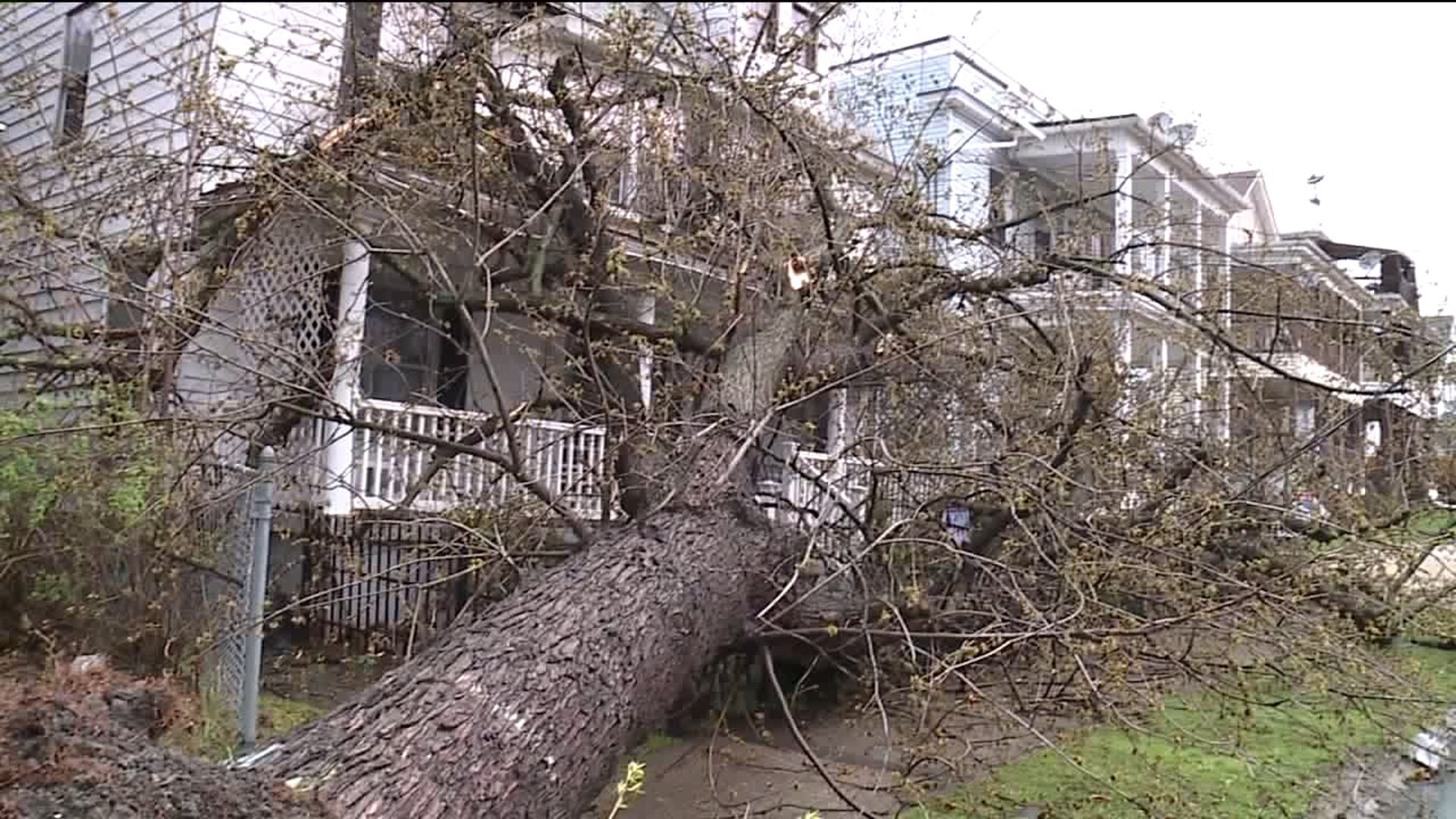 The Harrison Avenue neighborhood in Scranton, not far from the Dunmore line, was devastated by the early morning storm.

"We heard a huge bang and a lot of ruckus and jumped out of bed and said we got to get in the basement," said Karen Lotz.

Lotz lives on Harrison Avenue and says the storm was just that intense. It sounded like a tornado. she and her family had to take cover.

After the sun came up, you could see what happened. Ann Thiel's home and backyard took a big hit. Her fence, only three years old, was ripped apart. Part of her neighbor's tree is taking a dip in her pool.

"It's ruined, take it down, start over, hopefully still have a pool. I don't know," said Thiel.

Thiel is far from alone in this. The neighboring Myrtle Street United Methodist Church has broken windows, plus damage to the steeple, and the roof is missing some shingles.

Many in this Scranton neighborhood were asleep as the storm moved in. Zach Senchak was not. He heard it coming.

"A bunch of gusts, huge gusts of wind, the house started to shake and everything coming off the house, the chimney, a bunch of siding. The whole backyard, the fencing and everything is down over there, crazy wind, really," Senchak said.

Plus, there is damage on the inside. Missing shingles allowed rainwater to get inside.

A tree landed on Bruce Follweiler's home on Prescott Avenue.

"All I heard was a crash, looked in the window, you can see out of my bedroom window and after that came down," said Follweiler recalled.

The downed tree blocked his front door. Adding insult to injury, it isn't even his tree. Follweiler is thankful it isn't worse. He and four family members were home. No one hurt. His job now is to call his insurance company and find someone to cut up the tree.

Experts say to treat every power line as if it is live and to never try to drive through high water.

Schools are closing and delaying through the area. See if yours is on the list.

For the latest on the weather conditions, click here.