Shawn Christy Guilty on All Charges

SCRANTON, Pa. — Shawn Christy, the fugitive who led authorities on a three-month chase through several states and Canada, has been found guilty on all cha... 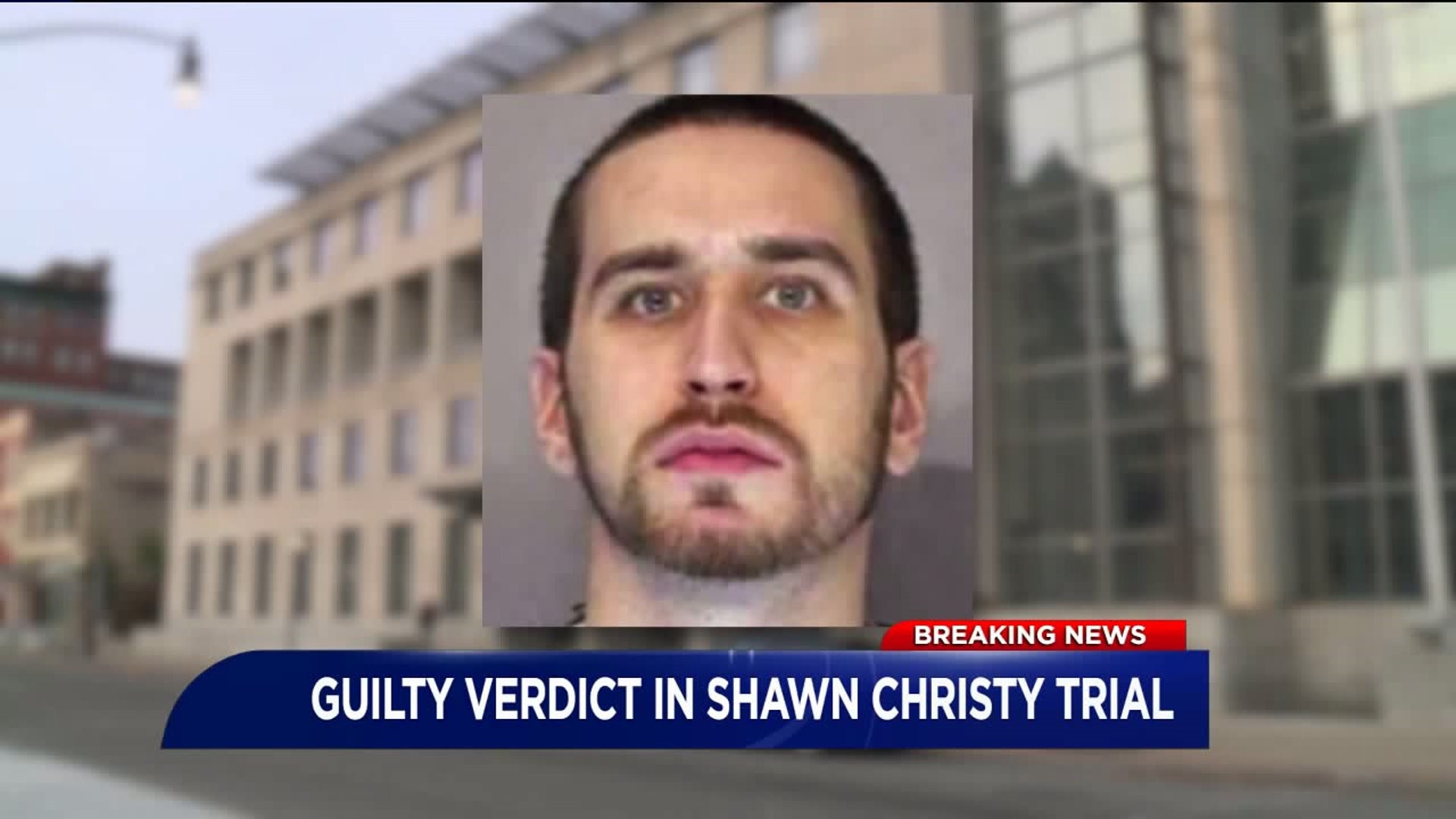 SCRANTON, Pa. -- Shawn Christy, the fugitive who led authorities on a three-month chase through several states and Canada, has been found guilty on all charges in federal court.

Christy did not react when the judge repeated the words "guilty" 11 times, once for each count.

The jury deliberated for about six hours before finding Christy guilty on 11 counts, ranging from making threats against the president to driving a stolen vehicle across state lines.

Christy's mother and girlfriend have been in the courtroom every day of this trial and defended Christy outside the courthouse until Tuesday when they did not show to hear Christy's verdict.

The jury also reached another guilty verdict on a charge they were unaware of: being a felon in possession of a firearm. The jury was not told about this charge before reaching a verdict on the first 11 counts, so their opinion of Christy wouldn't be tainted.

The prosecution called two FBI agents to the stand to prove that Christy was convicted of a felony in Alaska in 2012, making harassing telephone calls to Sarah Palin's former attorneys.

After one of the FBI agents testified, Christy lashed out at the agent and the prosecution saying he was wasting their time and that he didn't like the U.S. attorneys and the U.S. Marshals.

During his closing argument, Christy also told the members of the prosecution not to visit him in prison because he was done with the FBI. He also stated, "this body doesn't stop until I'm dead, just remember that." 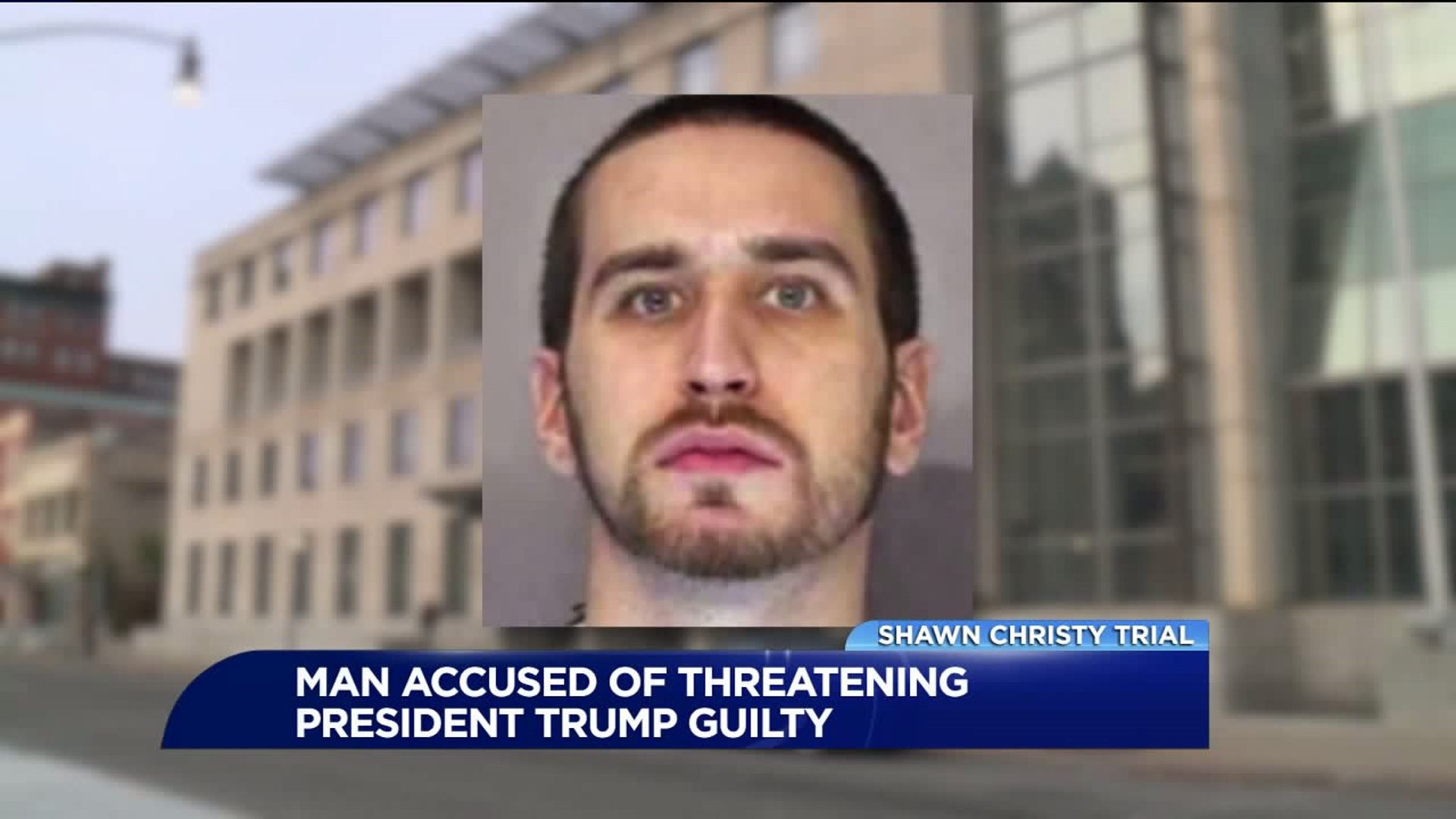 Christy's sentencing has tentatively been scheduled for the end of February.

Christy, from McAdoo in Schuylkill County, was caught in Ohio last September after a massive manhunt that spanned six states and Canada. While he was on the run, federal officials say Christy broke into several homes and businesses, stealing food, firearms, and vehicles.

Federal officials said after making threats online, Christy went on a three-month crime spree, breaking into homes, businesses like Hazleton Oil where he used to work, Skipper Dipper in Schuylkill County, even the Scranton School for the Deaf and Hard of Hearing.

Police said he stole food, firearms, and vehicles in a total of six states and Canada before being caught in Ohio.

Christy said he has been unfairly targeted by the government and represented himself in court.

In 2011, Christy and his father were arrested and charged with harassing Palin's attorneys.

In 2015, Shawn Christy was accused of harassing a teacher at a school in Luzerne County.

In 2017, police said he threatened to kill a tax collection clerk and later that year attacked the mayor of McAdoo. He claims video evidence of the fight between the two was altered by a McAdoo police officer. He called that Schuykill County case the backbone of this federal case. Christy missed his first court date for that case in May of 2018. That's when a warrant went out for his arrest, and he eventually became a fugitive. It was also in 2018 when Christy made the online threats against President Trump and Northampton County District Attorney John Morganelli.

He now faces decades in prison.