For Jersey Shore's first time at states, they took home the state runner-up in Class 4A. 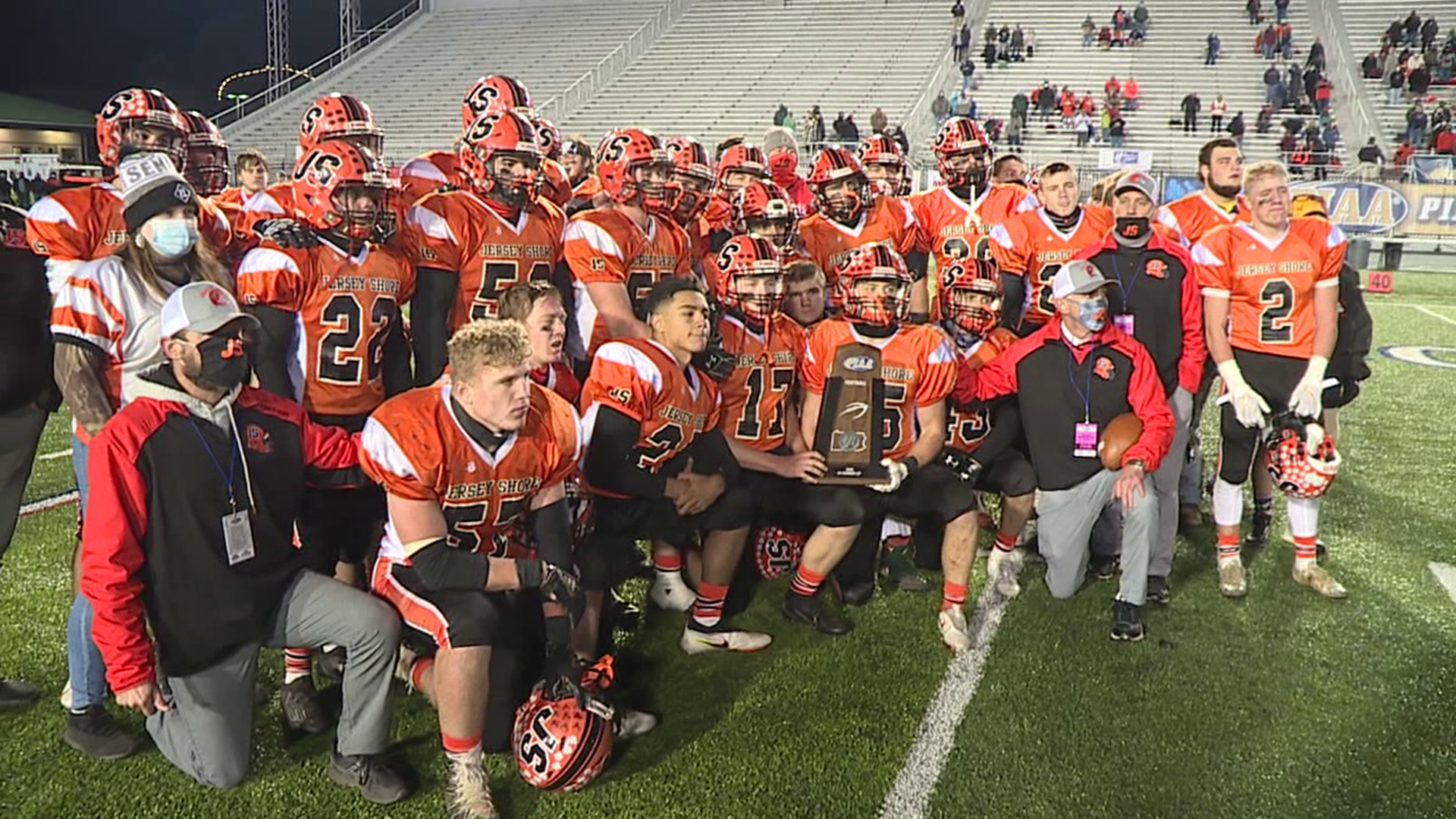 The Jersey Shore Bulldogs enjoyed their first ever trip to Hersheypark Stadium. Shore paired against Thomas Jefferson in the Class 4A championship.

But early on, the Jaguars showed why they're the defending state champs. Remember, they beat Dallas in last year's title. Conner Murga makes it 7-0.

First play of the second quarter. Jake Pugh to Preston Zandier. 28 yard touchdown. 14-0 Thomas Jefferson at the half.

But after intermission, Jersey Shore started to turn this thing around and here's the play that sparked it all.

That's Dalton Dugan picking off Pugh. He cuts back inside and takes it to the house. A pick 6 and it's a 14-7.

4th quarter. Jaguars looking to punch it in, but instead, Kooper Peacock punches it out. There's a fumble and Hayden Packer recovers.

But the dogs give it right back on a fumbled snap and DeRon VanBibber takes it in. Jags take a 21-7 lead.

But Shore just refuses to give up. Branden Wheary to Owen Anderson. Touchdown Jersey Shore, but only 34 ticks on the clock. So they need an onside kick.

Cam Allison kicks it, there's a scrum for the ball and the Bulldogs recover. Somehow, some way, Jersey Shore has a chance to tie or even win.

Four second left. Last chance, but this play never had a chance.

Jersey Shore left it all out on the field, but they lost a heartbreaker, 21-14, and settle for state runner-up in Class 4A.

"Most teams would have just fell on over, but we came back. I love this team. I was just thinking...I'll never get to play with these boys again. Never get to play high school football again. It's just heartbreaking," said Owen Anderson.

"It was crazy. We were down 21-7 and all of the sudden, we had a chance to end up executing and take over the game. I thought we had it. Even until the last four seconds of the game. We just came up short..." said Dalton Dugan.

"... It's heartbreaking that we lost, but we fought to the very last second of the game and we came here and played some Bulldog tough football." said Dugan.

"What can you say? I'm just proud of our kids and what they achieved this year. We're disappointed. We're disappointed we didn't get the gold. We thought we would get it. Kind of feel like we ran out of time. We left our game out on the field," said Tom Gravish.