Maggie is ranked #1 in her age group 15-17 year olds from the 2021 season of Indoor, JOAD Target Nationals and Outdoor Nationals 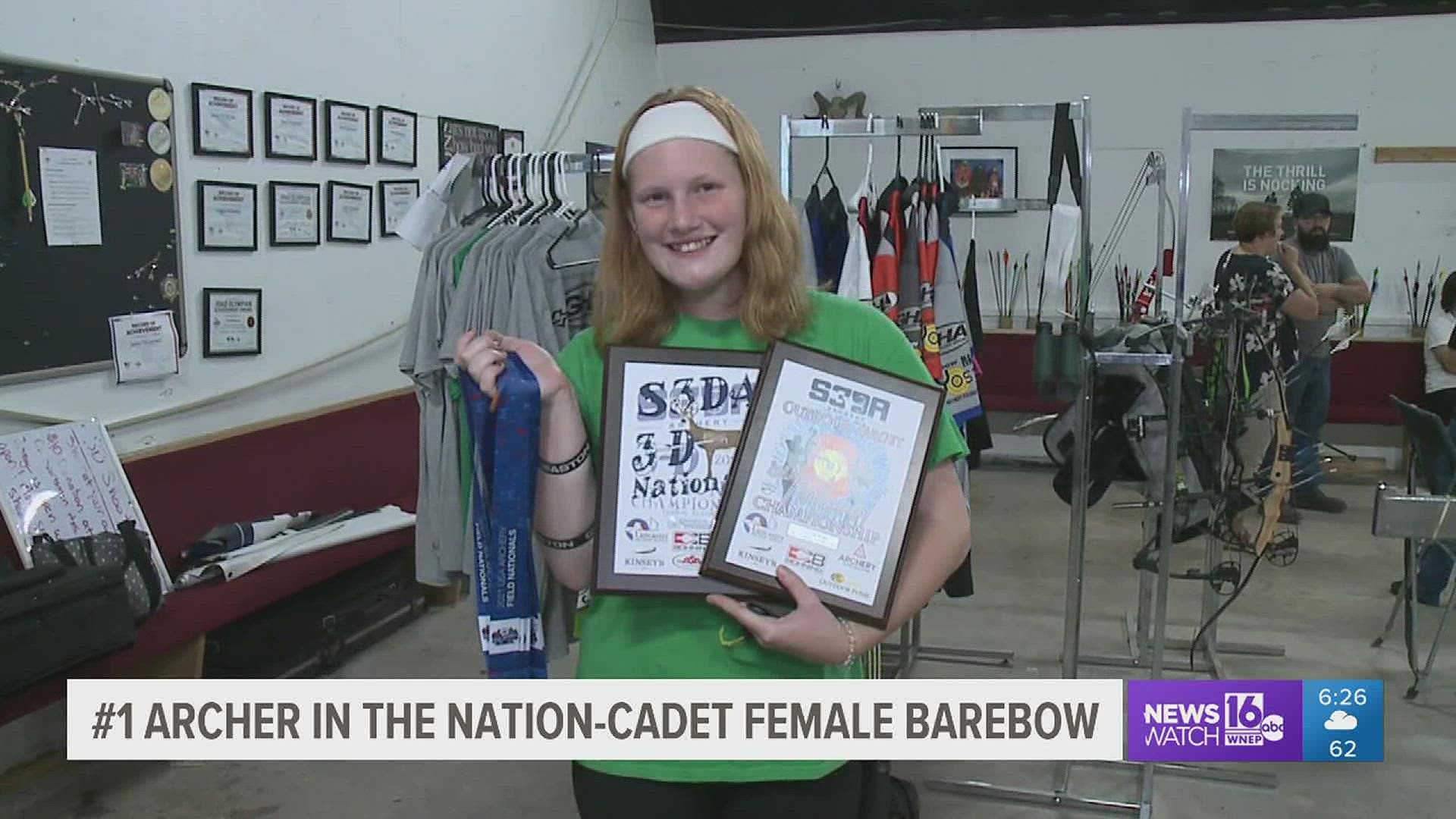 ORWIGSBURG, Pa. — The medals hang inside Grass Hollow Archery in Orwigsburg. They are for a fantastic year of competition from Maggie Brensinger from Saint Clair. She earned the #1 ranking for 15-17 year old's for Cadet Female Barebow from across the nation coming in first in Indoor, tied for 1st at JOAD Target Nationals, and #1 at Field Nationals. That earned her the right to be part of the USA Archery Team in 2022.

"But being on the USA Team is an absolute privilege, an honor. I get a red, white and blue jersey. Hopefully it opens up world level competition for me instead of just national because I would love to go see the world," said Maggie.

RELATED: Brensinger from Saint Clair now competes in Barebow in the 50 meter range and is looking forward to IBO Nationals in June

Also out of Grass Hollow Archery run by Frank McDonough was Emily Rodriguez from Bethlehem. She finished 5th in the nation in Cadet Female Barebow. So to have 2 place in the top 5 says a lot about their training and dedication to this sport.

"It is amazing to compete with her and also be her teammate. I enjoy shooting with her a lot. And her being 1st and me being 5th also like drives me to do better. And try to be better as an archer. It makes me want to be more successful," said Emily.

"It's not just barebow. It's Olympic re-curve. It's compound multiple state champions. But those two trained very specifically to pursue USAT and the United States Archery Team. And there is a points system that goes with it. So that means that they traveled to outdoor nationals, they shot Indoor Nationals and Field Nationals. They we're all the way out in Washington state, and they really put in the time to learn those different disciplines," said Frank.

"Definitely Field Nationals. It was absolutely beautiful at the venue, and the course was challenging and even in the woods it was just gorgeous," added Maggie.

Confidence is key in competition. Maggie plans to move up into the next age group soon and finding focus there will be key.

Maggie Brensinger from Saint Clair prepares for qualifying in the upcoming IBO Nationals in PA in June. Her story tonight at 6pm @WNEP @WNEPSports Her target now at 50 meters. pic.twitter.com/HXlphbk6NL

"She is at that point where her skill level is really really high and it's building the mental game," added Frank.

Some huge results for @USAArchery during qualification today at the @Tokyo2020 @Olympics. 💪🇺🇸