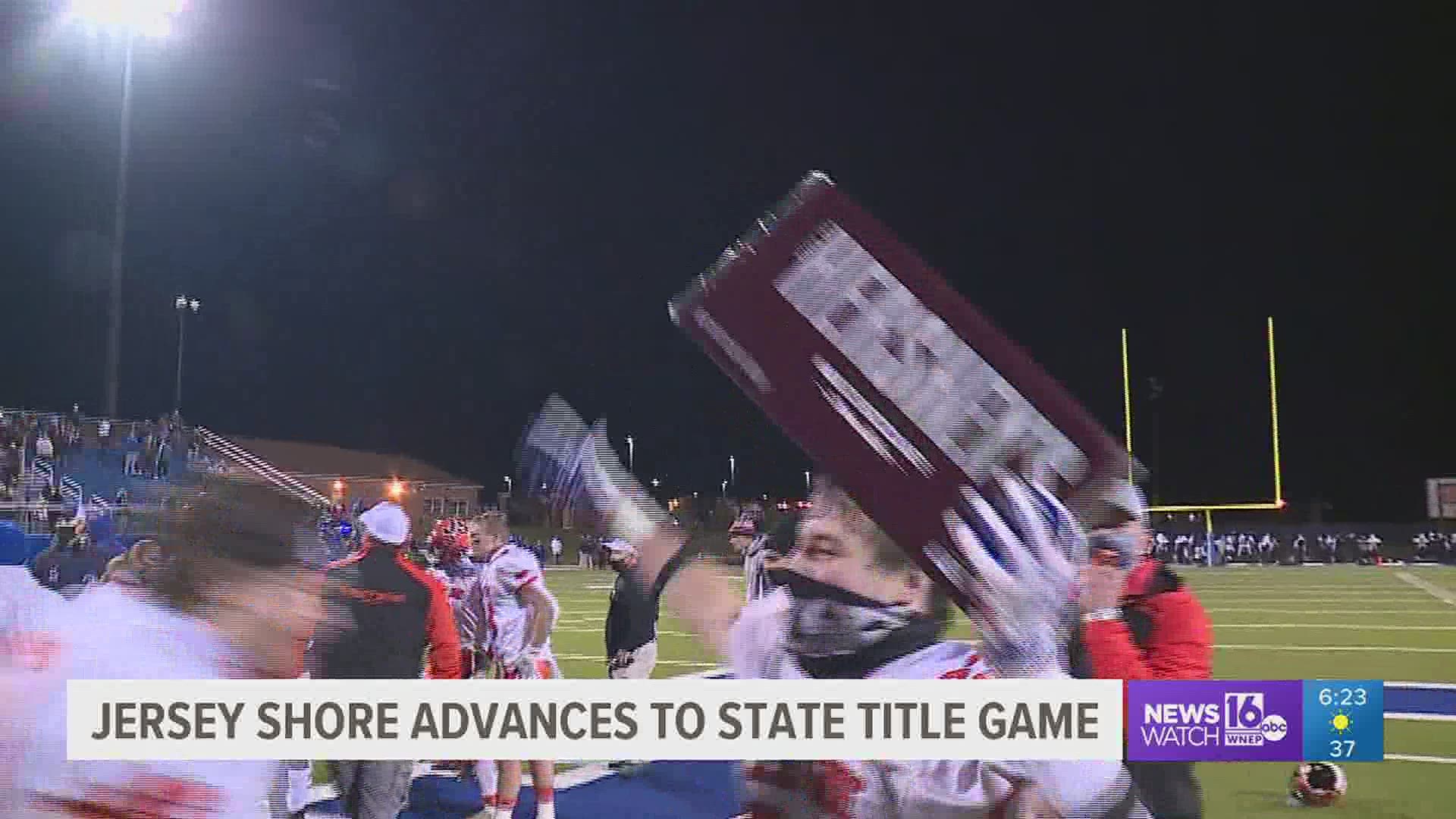 SCRANTON, Pa. — The Bulldogs are going to Hershey. Jersey Shore just punched their first-ever ticket to the state championship game and I think it’s safe to say they enjoyed the moment.

"It’s just the ultimate payoff," Jersey Shore senior quarterback Branden Wheary said. "We put in so much hard work in the offseason, during the season in practice, to get to where we are now. It’s just gratification and we knew that we put in the hard work and we put enough work in the offseason to be able to get back to this point."

The Bulldogs beat Lampeter-Strasburg 39-35 in the Class 4A Eastern Final, holding the Pioneers to just 7 second half points.

"Just kind of pointed to hey, some of you in this room, you did this last year in the Pottsville game," Jersey Shore football coach Tom Gravish pointed out, referencing the 3OT win in last year's postseason. "Hats off to these guys because we played for 48 minutes. We always feel we have a chance."

RELATED: Jersey Shore advances to the 'AAAA' State Football Championship with a 39-35 win over Lampeter-Strasburg

RELATED: Danville Goes On The Road And Loses 44-14 To Wyomissing

Practicing on Thanksgiving is routine at Southern Columbia. The Tigers are going to their championship game for a 6th straight year, hoping to win their 5th title during that stretch and their 11th overall.

"It’s awesome," Southern Columbia sophomore running back Gavin Garcia began. "We knew at the beginning of the season, there was a lot of doubt on this team after losing so many seniors, however, everyone stepped up and we’re back to where we want to be in Hersheyworld next week.”

Southern’s 42-14 win over Bishop McDevitt in the Class 2A Eastern Final was career win number 455 for Jim Roth – tying him with the late, great George Curry. A win in the championship game against Wilmington would make Roth the winningest coach in state history.

"I can’t say enough about the respect I had for Coach Curry and to be in this position is very humbling," coach Roth said.

"My dad’s played for him. I’ve had cousins," Southern Columbia senior tight end Wade Kerstetter said. "To beat a team that he actually ties it? Unreal and hopefully next week we can get him to be number one."

”It’s a great accomplishment for the program overall that we’ve been able to accumulate those numbers in the last 35 plus years," Roth concluded.

Both Jersey Shore and Southern Columbia play for state titles on Saturday.