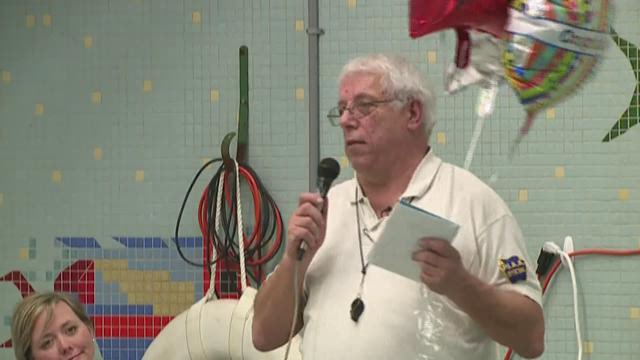 Frank Socha became a PIAA official back in 1970. Yes, 50 years as a referee. Nearly half of those, he also coached at Mansfield University, Athens, and here in Towanda. Five of his former swimmers' records are still on the wall and so are some additions: signs, cards, balloons, all to celebrate this milestone.

"It is special," Socha said. "I just happened to be around long enough. It's really more for the kids, not for me. That's why I do this. I do this for the kids, watching them improve from week to week, day to day sometimes. That's the motivation that keeps me going."

But the 68-year-old isn't alone. Fellow ref Larry Gabb has 46 years in the business. Hank Schelter - 39. Among them, 135 years of officiating experience, but Socha sets the bar, especially for the younger refs, like his daughter, Becky.

"I can never ever ever ever live up to that," Becky Socha-Brown said. "He's been such a presence in the swimming world for so long. He's just a gift to this sport and to all the sports that he referees."

All the sports. Over the years, he's reffed football, volleyball, baseball and even the Special Olympics, but it's in the pool where he's reached the half-century mark.

"Frank has been an inspiration to the community," fellow official Susie Place added. "He has really brought swimming and diving to this area. The longevity that he has to continue doing what he's been doing is an inspiration to us all."

"He loves the sport," Socha-Brown said. "His blood is mostly chlorinated water. It's just one of the great loves of his life."