Day 2 of a packed weekend here didn’t disappoint! Earlier, the Monster Energy Cup drivers were on track and then the Gander Outdoors Truck Series race got under... 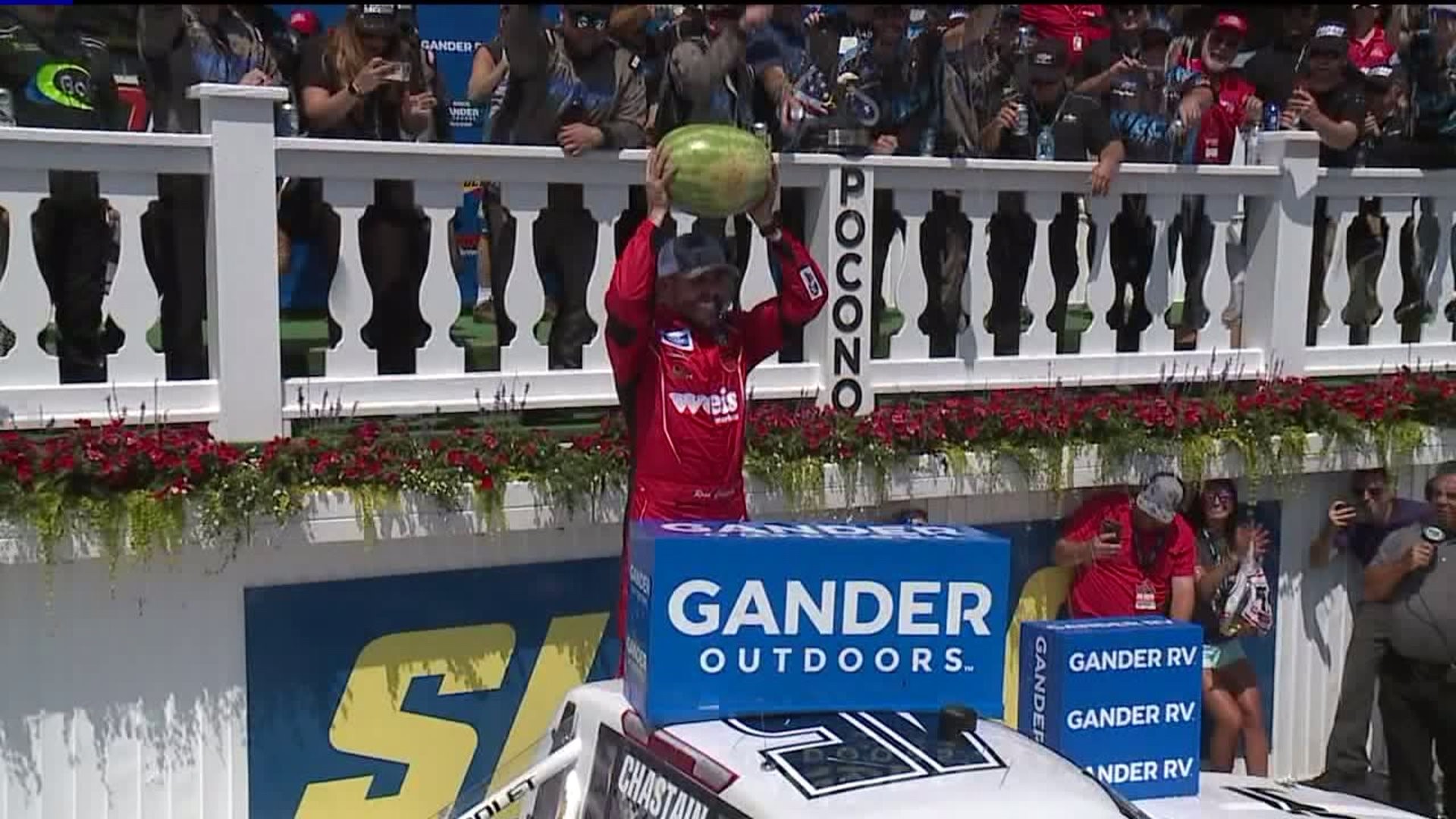 Day 2 of a packed weekend here didn’t disappoint! Earlier, the Monster Energy Cup drivers were on track and then the Gander Outdoors Truck Series race got underway. The Gander RV 150 began with Austin Hill on the pole, but it wasn’t for long. The race quickly became dominated by Ross Chastain in the No. 45 Chevrolet. Chastain started from the outside pole and led 54 of those 60 laps before taking the checkered flag. With a dominating victory comes an epic celebration. Why not play catch in the grandstand with a giant watermelon ball when you’re the winner? The watermelon man was more than happy to celebrate the win in victory lane!

“It was incredible," Chastain said. "Nobody had anything for us. So I just held the wheel, didn’t miss a shift, and hit pit road conservatively. It was crazy how simple it was! Watermelon never tasted sweeter! Man, that felt good! We dominated today and we put Weis Markets and Acrulite Baja in victory lane. It’s a dream come true!”

Chastain's family owns a watermelon farm in Florida -- hence the melon smash -- but there was plenty of time to clean up before the Monster Energy Cup drivers were on track for qualifying for Sunday’s Gander RV 400.

Austin Dillon held the pole for a good portion, but the fastest laps all came later. Aric Almirola turned a fast lap speed of 173.164. Then Joey Logano did one better on Almirola, squeaking past with a 173.377, but that only lasted a few seconds. Kevin Harvick followed with a speed of 174.058 MPH, putting the gnarly looking No. 4 Busch Beer Gen X Ford on the pole for Sunday.

"Just really proud of everybody on our Busch Beer Ford Mustang," Harvick said. "They did a great job. We didn't do a qualifying run in practice, just really tried to work on our race stuff to get it as close as possible and kind of winged it for the qualifying session. So just leaned on our teammates and engineers a lot to get the car right and luckily we stuck the lap. We want to win. For us, it's been a lot of races where we've run really well here and just haven't been able to close the deal. So, hopefully tomorrow's the day."

Harvick may have the sweetest looking paint job on the track this weekend and there’s a chance we could see it again in victory lane after Sunday's race. The green flag drops for the Gander RV 400 just after 3: 00 pm.