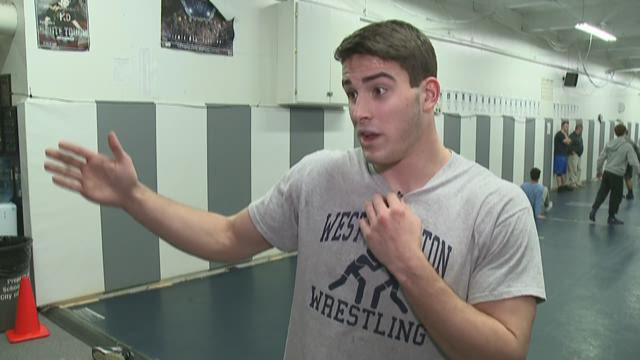 And 12th in the state in most rankings. At the same time he continues to climb to the top in the district he is also pursuing the top rank in his class at West academics is always before his athletics.

"I was kind of dreading it a lot to be honest . I had a chem test my first two periods for AP chemistry then I had a math test which I have to finish tomorrow and then I had an English quiz, a history quiz, and then I had a human phys quiz so now I am down here trying to work hard," said Cam.

Butka put on 20 lbs of muscle in the off-season and built his confidence to withstand the competition across the state.

"Get a mix of weightlifting and extra practice because strength is a big part of it too as well as technique. It's kind of just a balance of everything if you think about it, and I just try to stay on my "A" game all the time," added Cam.

"Last year his workout partner was our best guy in the room Jeremy Seymour 7th in the state. So working with him every single day just made him a better wrestler," said Paul.

When the Morgan brothers we're going through the program here at West Rob Butka was the head coach and Paul Fox the assistant. Now that Rob's son Cam is here-Fox is leading the charge, but Rob is always close by giving Cam tips.

"We worked together from 1997 to 2006, and like I said there is not someone out there that knows how to do a lineup better and motivate the kids better than Coach Fox," said Rob.

"Coach Fox is one of the best. He has been there for everything. Even in my freshman year. Even in my 7th grade year ever since then he has always been there. My dad has been there since I don't even remember the first time that he even wrestled with me. He will come up to me and I will wake up in the morning and he just starts wrestling me out of no where. So everything with him is always wrestling, always sports, always baseball, always school-everything. He just tries to push me hard and make me the best man that I can be and I love him for it," added Cam.