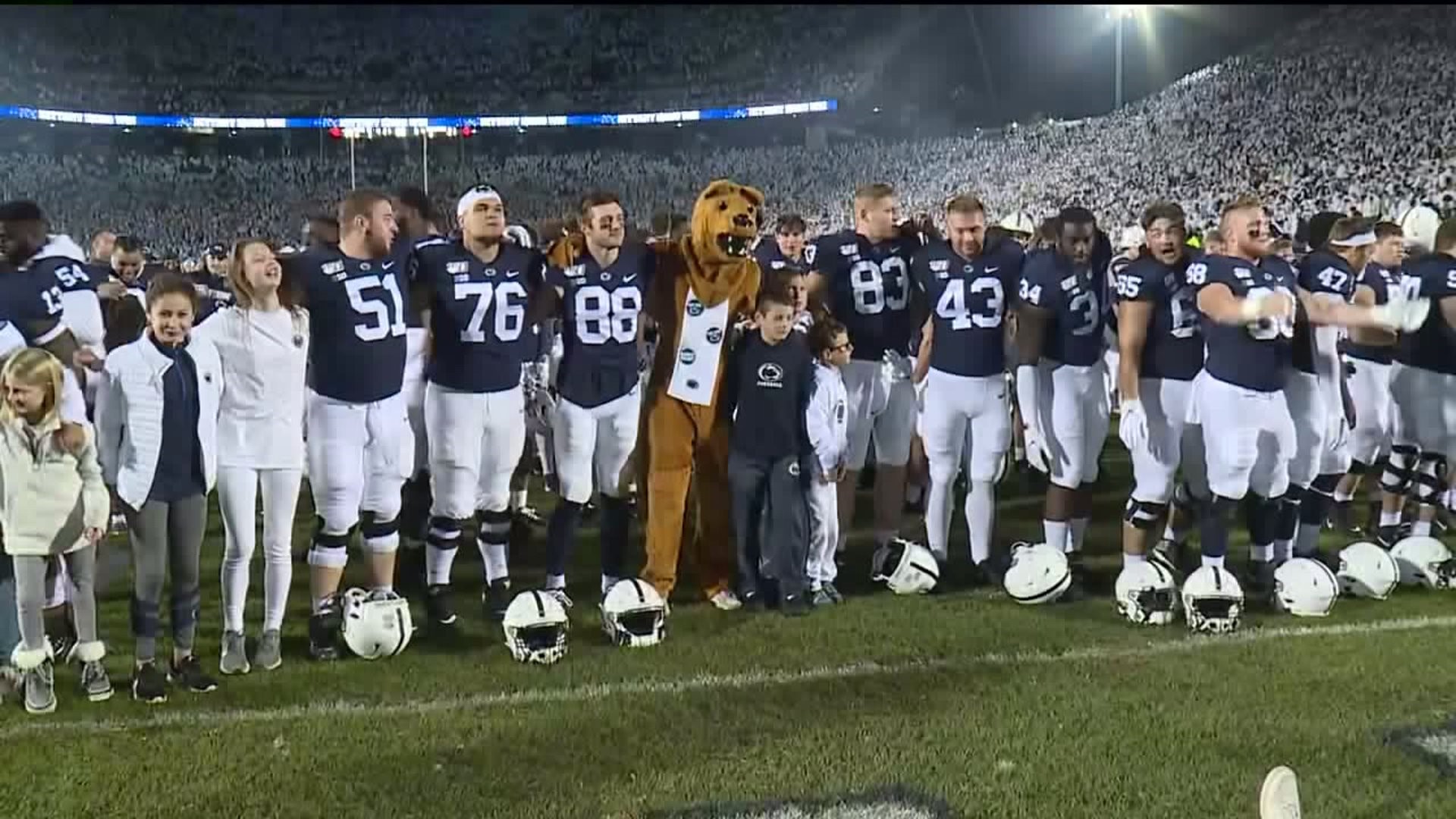 STATE COLLEGE, Pa. -- A former Penn State football player has accused four ex-teammates of hazing him and claims coach James Franklin retaliated against him after he reported it, according to a federal lawsuit filed Tuesday in U.S. Middle District Court.

Isaiah Humphries, who left the program, names Franklin in the lawsuit, along with ex-teammates Damion Barber, Micah Parsons, Yetur Gross-Matos, and Jesse Luketa.

Humphries, the son of former Penn State standout Jesse Humphries, left the program at the end of the 2018 season, eventually transferring to the University of California.

At the time of his departure, Humphries released a statement on Twitter saying that he was leaving "in order to grow and not lose the passion that I have for football and for everything that I value."

In the lawsuit Tuesday, Humphries accuses his former teammates of invoking the name of Penn State’s disgraced former defensive coordinator, Jerry Sandusky, while hazing him.

The lawsuit says the hazing “served as a form of initiation into the Penn State football program.” The accused participants stated they intended to make lower classmen, such as Humphries, “their b**** because this is a prison.”

Other statements made by the accused hazers included the phrases “I am going to Sandusky you,” and “this is Jerry,” the lawsuit claims.

Sandusky is currently serving in prison for the sexual abuse of young boys after being convicted of 48 counts in 2012. Some of the acts of sexual abuse occurred in the Lasch Building on Penn State’s campus, where some of the alleged acts of hazing occurred.

Other hazing acts occurred in a dormitory on the campus or in other places in Centre County, according to the lawsuit.

The hazing alleged in the lawsuit included acts of physical intimidation and abuse, stolen items of clothing, and simulated sexual acts. Some of the alleged hazing acts occurred in the team shower, while the participants were naked, the lawsuit claims.

Humphries claims the accused hazers performed humping motions on the bodies of lowerclassmen, placed their genitals on their faces, and simulated acts of ejaculation, among other acts prohibited by university and football program policies.

When hazing victims like Humphries showed any signs of resistance, the lawsuit claims, they were intimidated, threatened, or bullied.

Humphries’ lawsuit claims the hazing served to “recklessly or intentionally endanger the mental and physical health” and to “violate the dignity” of the lowerclassmen.

The lawsuit claims some of the alleged hazing acts were witnessed by members of the Penn State football team and its coaching staff.

Humphries claims that both he and his father — a former Penn State standout and NFL player — reported the alleged hazing to Franklin and other members of the coaching staff, but “no substantive action was taken” by Franklin or the other coaches, nor did Franklin or any other coaches report the allegations to “appropriate individuals or offices” at the university.

The lawsuit also claims that the Penn State coaching staff “overly and unfairly” scrutinized Humphries’ athletic performance in retaliation for reporting the alleged harassment and hazing and claims that Humphries was “scorned and punished” by Franklin’s staff.

He was allegedly required to participate in athletic drills “designed to ensure (Humphries’) failure, then used (Humphries’) losing performance in the football drills to justify an opinion that (his) performance was not sufficient to award him a game playing opportunity,” the lawsuit claims.

Humphries’ lawsuit claims the team’s academic adviser subjected him to “irrational and inappropriate censure,” and that he was denied medical accommodations to manage anxiety and loss of sleep by Franklin’s staff.

Penn State also attempted to remove Humphries from the program “with the excuse of a medical retirement option” as a form of retaliation, according to the lawsuit.

When Humphries began exploring transfer options, Franklin’s staff allegedly provided negative reviews about his performance to prospective programs as another form of retaliation, the lawsuit alleges.

Humphries also claims in the lawsuit that he was “ostracized and shunned” by other members of the football team, who allegedly conspired to “create an existence…designed to encourage him to leave Penn State University and resign from its football program.”

Luketa allegedly “continuously and repeatedly” threatened Humphries in retaliation for reporting the alleged hazing, the lawsuit states. Luketa, who is from Canada, allegedly told Humphries that if he ever visited Luketa’s city, he would make certain that Humphries was “gunned down” upon arrival, according to the lawsuit.

The lawsuit seeks compensatory damages against Penn State University, Franklin, and Barber for negligence in violating anti-hazing statutes. It also accuses Barber of assault and battery, and all named defendants of negligent infliction of emotional distress.

Barber is also accused of intentional infliction of emotional distress and civil conspiracy.

Humphries’ attorney, Steven F. Marino of Philadelphia, seeks a jury trial, according to the lawsuit.