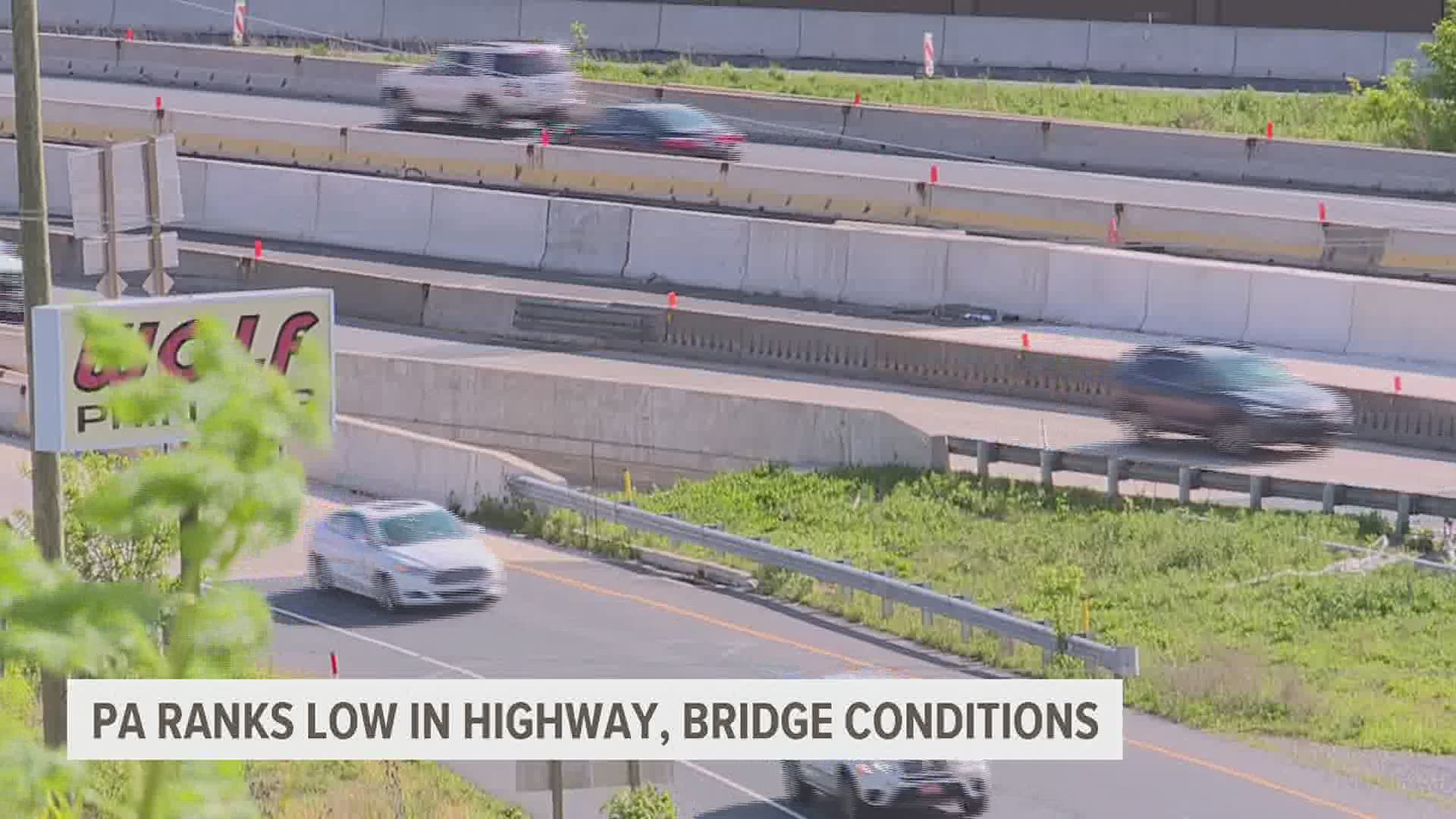 WASHINGTON, D.C., USA — Pennsylvania's interstate highways and bridges are among the most-deteriorated in the United States, according to a new report.

The report was released Tuesday by TRIP, a national transportation research nonprofit. It looks at the U.S. interstate highway system's use, condition and benefits, along with the findings of a 2019 report prepared by the Transportation Research Board at the request of Congress.

"As the U.S. Interstate Highway System turns 65, it is congested, carries significant levels of travel -- particularly by large trucks -- and lacks adequate funding to make needed repairs and improvements," TRIP said in a press release announcing its findings. "America’s most critical transportation link will need to be rebuilt and expanded to meet the nation’s growing transportation needs."

The report is in line with findings by the American Society of Civil Engineers (ASCE), which gave Pennsylvania a D+ grade in roads and bridges in its 2018 report, the latest available.

That’s actually an improvement from the last report card in 2014, which gave the state a D+ in bridges and a D- in roads.

According to the TRB report, the U.S. Interstate system has a persistent and growing backlog of physical and operational deficiencies as a result of age, heavy use and deferred reinvestment, and is in need of major reconstruction and modernization. The TRB report concludes that annual investment in the Interstate Highway System should be increased approximately two-and-a-half times, from $23 billion in 2018 to $57 billion annually over the next 20 years.

“Despite the progress we’ve made since passage of the transportation funding act in 2013, Pennsylvania has many remaining bridge and highway repair needs, and significant funding challenges facing us,” said Jason Wagner, managing director of the Pennsylvania Highway Information Association. “Reauthorizing a long-term, adequately funded federal assistance package would help address those needs, while putting thousands of Pennsylvanians back to work.”

The call for additional funding comes as the Biden administration is pushing for more infrastructure spending. Vice President Kamala Harris was in Pittsburgh Monday to promote a $2 trillion infrastructure bill.

But Pennsylvania is already struggling to pay for road maintenance. The state has a $6.9 billion budget to cover $15 billion in highway and bridge needs, leaving an $8.1 billion shortfall, according to PennDOT.

“We as a state need to come up with another form of funding to help make sure that we continue to have adequate funding,” Ferrell said. “I’m not saying that we’re going to get to $8 billion overnight, but we need to do more.”

TRIP’s report finds that while pavement smoothness on most segments of the U.S. Interstate system is acceptable, the crumbling foundations of most highway segments need to be reconstructed, and that continued resurfacing rather than addressing underlying foundational issues provides diminishing returns and results in shorter periods of pavement smoothness.

“Our rapidly deteriorating infrastructure is a clear and present danger to our nation’s supply chain," said Chris Spear, president and CEO of the American Trucking Associations. "Breakdowns in the Interstate Highway System add an annual $75 billion to the cost of freight transportation, and 67 million tons of excess carbon dioxide emissions are released into the atmosphere every year from trucks stuck in traffic congestion.

"This report quantifies how severe this crisis has become, and it underscores the urgent need for Congress to make real infrastructure investments that are backed by a fair and equitable user-based revenue source.”

Drivers frequently complain of uneven pavement and potholes on highways.

“I-83 is full of them, even just this road here where we’re at. There must be 20 or 30 potholes along this road,” said York resident Guy Welty. “It’s pretty substantial if you’ve got a nice car, you don’t want to hurt your car just driving down the road on your daily commute.”

When the funding arrives, driver said they would welcome more construction projects.

“I don’t mind the detours. I’m glad they have cones out here and got guys flagging and stuff, patrolling the safety of drivers on the road, so I don’t see it as a bid deal,” said Jovannie Cuevas of York.

The TRIP report found that since 2000, travel on the U.S. Interstate system, the importance of which has been heightened during the COVID-19 pandemic, has increased at a rate nearly triple that at which new lane capacity is being added.

Due to the COVID-19 pandemic, vehicle travel on U.S. Interstate highways dropped by as much as 45 percent in April 2020 (compared to April 2019) but rebounded to six percent below April 2019 levels by April 2021.

“The report released by TRIP confirms what American businesses experience every day -- our Interstate Highway System, which was once the envy of the world, is in serious need of modernization,” said Ed Mortimer, vice president of transportation infrastructure, U.S. Chamber of Commerce. “Commitment to modernization must be shared by federal, state and local leaders as well as the private sector. The Interstate system plays a key national role in economic success and quality of life for every American, and we urge bipartisan solutions this year to address this critical issue.”

In Pennsylvania, 27 percent of urban Interstate highways are considered congested during peak hours. Vehicle travel on Pennsylvania’s Interstates increased 22 percent from 2000 to 2019.

“AAA supports increased federal investment for the Interstate Highway System. Significant funding is needed to ensure safe, efficient and reliable mobility across the United States,” said Jill Ingrassia, AAA executive director of advocacy and communications. “AAA urges Congress and the administration to come together to get this important work done.”

The current federal surface transportation program, Fixing America’s Surface Transportation (FAST Act), the primary source of Interstate highway funding, expired on September 30, 2020 and was extended by one year by Congress to September 30, 2021. Reauthorization of a new long-term, adequately and reliably funded long-term federal program will be needed to ensure that a strong federal program supports the restoration of the Interstate system, TRIP said.

Based on the findings of the TRB Interstate report, TRIP has provided a set of recommendations for the restoration of the Interstate Highway System, which includes:

“The long-term vision that helped establish the current Interstate Highway System 65 years ago is needed again today,” said Dave Kearby, TRIP’s executive director. “A modernized Interstate system will be critical to the nation’s ability to fully recover from the COVID-19 pandemic and will require adequate investment in a federal surface transportation program that provides states and local government the funding and flexibility they will need to restore the nation’s most critical transportation link.”