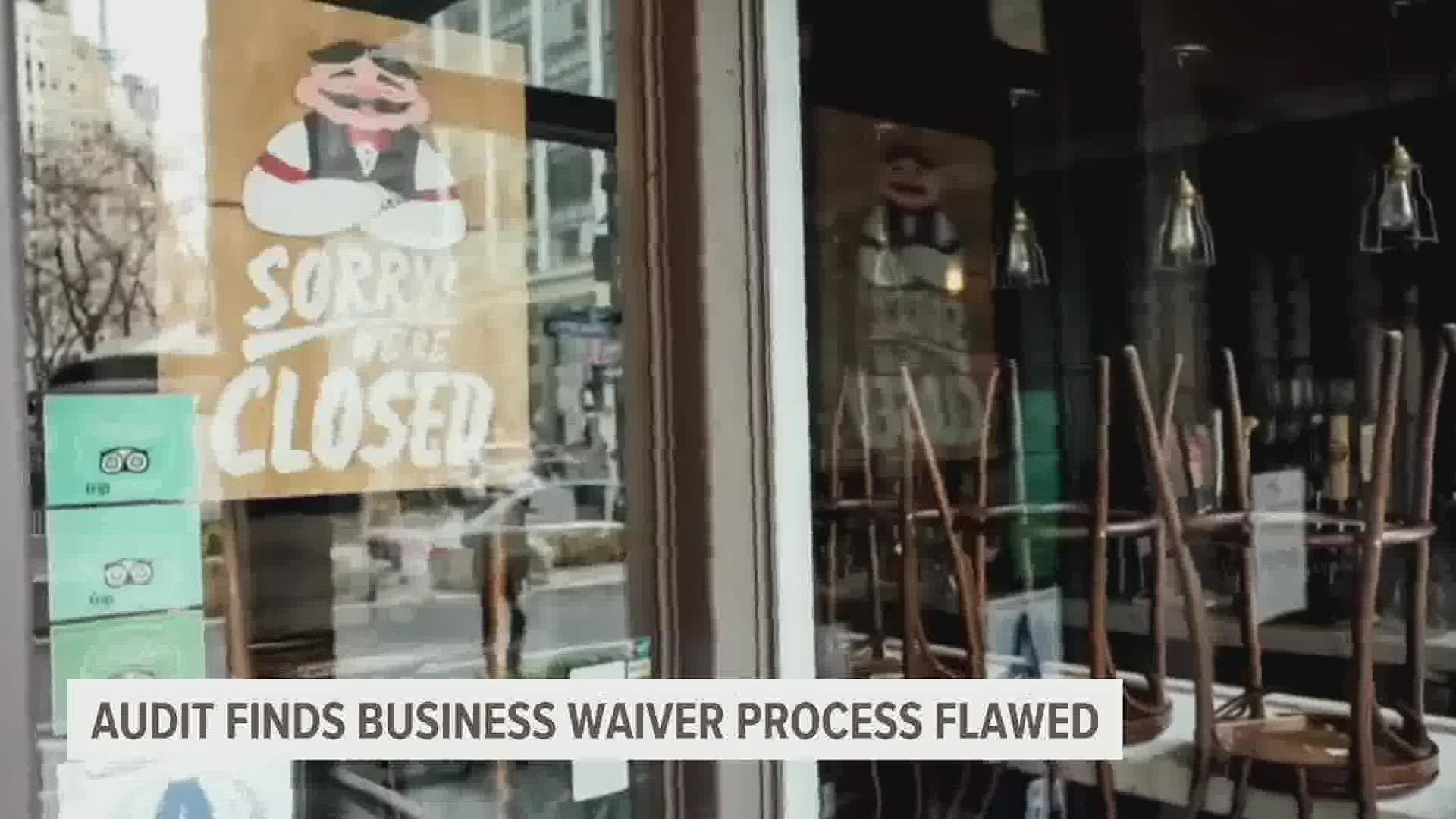 PENNSYLVANIA, USA — A Wolf administration program that allowed Pennsylvania businesses to seek waivers to remain open in the early days of the coronavirus pandemic was deeply flawed.

He said Tuesday that the program used criteria that shifted constantly and gave inconsistent and subjective answers to business owners struggling to stay afloat.

Auditors reviewed 150 waiver applications received by the Department of Community and Economic Development (DCED). They questioned the decisions on 45 applications.

"They were concerned with the extent of subjectivity involved in making these decisions. These questionable decisions had real-life negative consequences to businesses that should have been able to operate but instead were notified that they had to close," said DeFoor.

FOX43 heard dozens of complaints from business owners during the application process. Micah Durling was granted a waiver in April 2020 to operate his real estate photography business during COVID-19 lockdowns. It was revoked six weeks later, without warning.

"Boom, just an email. Very unceremonious. It just said we reviewed your application and determined that you are not an essential business," Durling said.

It is still unclear who was in charge of deciding which businesses were "essential" or "non-essential." According to the audit, that information was never documented.

Many business owners received a waiver to stay open during lockdowns, only to have it revoked a few weeks later. They wanted to know who decided which businesses are considered “essential” or “non-essential.” According to the audit, that information was never documented. @fox43 pic.twitter.com/vXU5mxhlxR

Other issues with the waiver application and review processes identified by the performance audit included:

•             Waiver applications processed early in the program were reviewed differently than those processed later in the waiver program, with some later applications receiving multiple levels of review including by legal counsel.

•             Waiver application databases did not retain the identity of all individuals that reviewed an application, along with all decisions made, only retaining the last decision made.

•             Waiver application databases were not designed to require reviewers to document the justification for decisions made on an application.

•             The wording of the waiver decision responses emailed to businesses by DCED lacked clarity and could have led to confusion for businesses as to what, if any, business operations they could continue to perform.

The administration of Democratic Gov. Tom Wolf found the recommendations to be constructive and said every decision was made in a professional manner.

"The Wolf Administration prides itself on transparency, and this audit reinforces what we have said time and time again—this situation was unprecedented and DCED is proud of the work accomplished by our team in an incredibly short time period," said Casey Smith, DCED Communications Director. "The waiver program began accepting requests on March 20, 2020. By the time the program closed on April 3, 2020, it had received a total of 42,380 waiver requests, an average of 2,800 requests per day."

Key recommendation: The Governor’s Office should reevaluate its process for determining life-sustaining and non-life-sustaining industry groups, in consultation with the federal government, the General Assembly, other state agencies and stakeholder groups.

Finding 2 – The guidance available to businesses and used by DCED to determine whether or not businesses are life-sustaining continued to evolve throughout the waiver program.

Key recommendations: If a waiver program is ever needed again, state officials should attempt to limit the number of changes made to the operating guidance being used and also consider identifying/highlighting any necessary changes made in each version of guidance for clarity and ease of use.

Finding 3 – Deficiencies related to the development of the waiver program resulted in a lack of accountability and transparency.

Key recommendations: If a waiver program is ever needed again, state officials should ensure that the waiver application includes detailed instructions and a section for the applicant to attest to the accuracy of the information they provided. Steps should also be taken to ensure the information entered in the database during the review process cannot be overwritten and contains full justification for decisions made, as well as the dates for each step in the process.

Key recommendations: If a waiver program is ever needed again, all decisions should be reviewed and approved by a second reviewer prior to responses being issued. A monitoring process should be created to ensure that all responses to businesses are accurate and clear. Also, a planning tool should be developed that includes the guidance reviewers should use when evaluating applications; documents necessary steps of the review process; and a requirement to retain support for decisions made.

Finding 5 – Responses to businesses were inconsistent among businesses within the same industry.

Key recommendations: If a waiver program is ever needed again, officials should ensure that the review process includes a detailed evaluation of decisions made for businesses within the same industries in order to ensure consistency. Also, whenever there is a change in guidance, all applications previously processed for that industry are immediately and carefully reviewed to determine if a corrected response is necessary and, if so, send corrections to the businesses affected in a timely manner.

You can read the full waiver performance audit here.