The theme of the RNC is 'Honoring the Great American Story' and will feature speakers from everyday life as well as cable news and the White House. 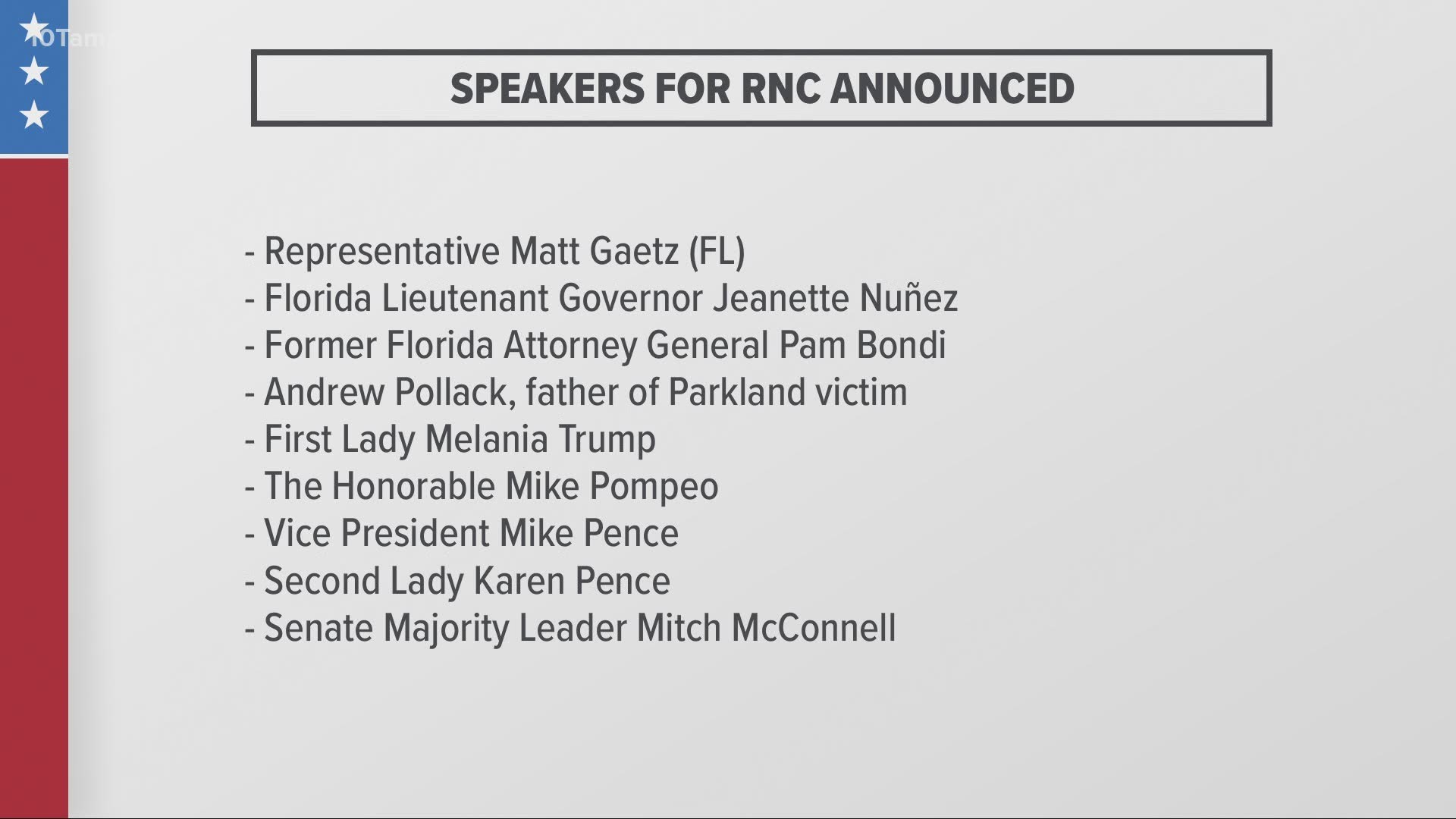 Republicans will aim to recast the story of Donald Trump's presidency when they hold their national convention, featuring speakers drawn from everyday life as well as cable news and the White House while drawing a stark contrast with Democratic presidential nominee Joe Biden.

Trump is looking to shift his campaign away from being a referendum on a presidency ravaged by a pandemic and economic collapse and toward a choice between vastly different visions of America’s future. Reshaping the national conversation around the race has taken on greater urgency for Trump, who trails in public and private surveys as the coronavirus continues to ravage the nation's economy and his reelection chances.

The RNC plan for the week

The four-day event is themed “Honoring the Great American Story,” according to four Trump campaign officials involved with the planning process but not authorized to discuss it by name. The convention will feature prominently a number of well-known Trump supporters, including members of the Trump family, but also those whom the GOP say are members of the “silent majority” of Americans who have been aided by Trump’s policies. Some have been “silenced” by a “cancel culture” pushed by Democrats, the campaign officials said.

Where Democrats highlighted Republicans who crossed party lines to back Biden as an indictment of Trump's leadership, the GOP lineup will primarily feature figures on the conservative media circuit with the hope that they can deliver red meat for the president's loyal supporters — though planners say they will feature some people who did not vote for Trump in 2016.

Planners insist they will put forward a more “positive” convention than Democrats’ roasting of Trump. Yet the president also appears intent on trying to seize on the nation’s cultural divides, particularly around issues of racial injustice and policing, drawing on grievances to motivate his base.

Tanya Weinreis, a Montana coffee shop owner who received federal loans to pay her employees during the coronavirus, will also speak, as will Andrew Pollack, whose daughter Meadow was among those killed in the 2018 school shooting in Parkland, Florida.

Tuesday's theme is “Land of Opportunity," which is expected to cast Biden's plans as “socialist" and “radical left.” Speakers will highlight Trump's actions on trade, abortion and the nation's opioid crisis. Secretary of State Mike Pompeo will address Trump's foreign policy record, an unusual foray into domestic politics by the nation's top diplomat, and Trump children Eric and Tiffany Trump will also speak.

Another speaker will be Nicholas Sandmann, who as a student at a Catholic high school in Kentucky gained national attention last year for his interaction with a Native American man during demonstrations in Washington. Media commentary in the aftermath of the viral video from the interaction depicted the students as racially insensitive. Sandmann and the Native American man, Nathan Phillips, later said they were both trying to defuse tensions among conflicting groups that converted at the Lincoln Memorial.

First lady Melania Trump will deliver the marquee address of the night from a newly renovated White House Rose Garden.

Credit: AP
President Donald Trump speaks to members of the media before boarding Marine One on the South Lawn of the White House in Washington, Monday, July 27, 2020.

Clarence Henderson, a civil rights figure from the 1960s, is also on deck to address the “true meaning of peaceful protest," planners said, as Trump plans to highlight police officers amid a nationwide call for policing reform after the May death of George Floyd in police custody.

Vice President Mike Pence will deliver the keynote Wednesday from Baltimore’s Fort McHenry, which inspired “The Star-Spangled Banner” in 1814, to highlight Trump's opposition to professional athletes who protest racial injustice by kneeling during the national anthem.

Speakers on the final night, themed “Land of Greatness, will include Alice Johnson, the criminal justice advocate whose sentence on drug crimes was commuted by Trump at the urging of celebrity Kim Kardashian; Carl and Marsha Mueller, the parents of human rights activist Kayla Mueller, who died while being held by the Islamic State group in Syria; and evangelist Rev. Franklin Graham.

Trump's personal attorney, former New York Mayor Rudy Giuliani, whose attempts to dig up dirt in Ukraine on Biden's family were at the center of the president's impeachment last year, will also address the final night of the convention. Republican congressional leaders Sen. Mitch McConnell of Kentucky and Rep. Kevin McCarthy of California and Democrat turned Republican Rep. Jeff Van Drew of New Jersey are to deliver remarks, as will Ultimate Fighting Championship President Dana White.

Trump will close out the convention during an unprecedented address from the White House South Lawn. He and Ivanka Trump, his daughter and senior adviser who is set to introduce him, will speak from an elaborate stage in front of the Executive Mansion. The move has drawn criticism from Democrats and ethics groups, who argue that Trump is violating the spirit, if not the letter, of federal law by using the White House grounds to stage his convention.

While the president is not covered by the Hatch Act, his aides cannot appear at the convention in their official capacities and staffers are extremely limited in what they may do to help pull off the convention. Planners insist they are following all ethics rules.

Plans for the GOP event have rapidly come together over the last six weeks, since it became apparent to the party that Trump could not hold an in-person convention at his backup site of Jacksonville, Florida. Trump was forced to move most of the convention out of Charlotte, North Carolina, the original host city, because of restrictive state coronavirus precautions.

Republicans — and Trump himself — closely watched the Democratic convention for cues on what worked and what didn't in the virtual format, hoping that will provide an advantage in putting together their week of events.

One major difference, Republicans said, would be the emphasis on live rather than taped events — and holding events with crowds to the greatest extent practicable. Trump repeatedly criticized Democrats’ reliance on pre-taped videos, rather than live addresses, saying Tuesday, “Live, by the way, is always much more exciting."

A small crowd was expected for Melania Trump's speech in the Rose Garden, with a larger cohort watching in-person when Pence speaks Wednesday from Fort McHenry. More than 1,000 guests are anticipated on the South Lawn when Trump delivers his acceptance speech Thursday night. The RNC has requested approval to launch fireworks from the National Mall after Trump's speech.

Unlike Democrats, Republicans were not expected to feature a roll call of states to formally renominate the president — traditionally one of the most dramatic moments of a convention. The actual voting will be taking place in truncated format Monday morning in Charlotte with a condensed recap expected to air later during the evening.