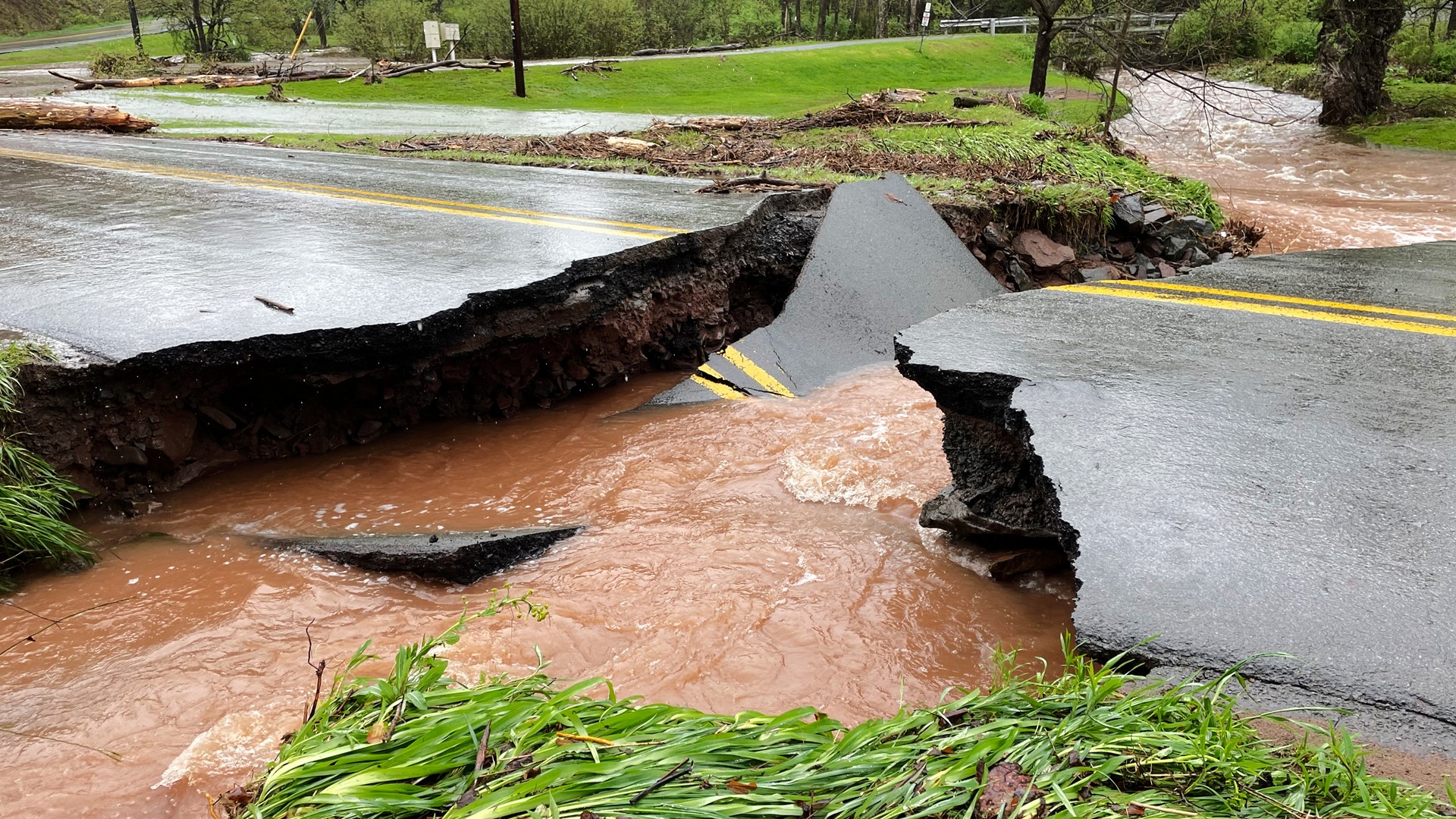 HONESDALE, Pa. — The heavy rains that fell overnight forced many roads in the area to close because of flooding or completely washing them away.

Route 670 was closed between Honesdale and Bethany. We also found rainwater pouring down onto Westside Street in the historic district of Honesdale. Mud and rocks with nowhere to go clogged storm drains and closed roads.

In Waymart, people who live near the intersection of Myrtle and Marion Streets say the water coming off the mountain caused a mess.

Neighbors who live in the area say when it rains hard, the drains back up quickly. This storm came fast and furious, leaving a big mess for many.

Joseph Hornung took the morning off from work to clean up what had washed down the street and into his neighbor's yard. He says once it started raining hard, he knew it was going to be bad.

"It just let loose. It literally took maybe a half-hour, and then my basement had water in it," Hornung said.

Runoff made quite the mess for neighbors in parts of Honesdale. Water was rushing down the hill into homes along several streets in the borough's historic neighborhood.

It was much of the same along Elm Place just below Route 670 that connects Honesdale to Bethany. Water rushed down the hill into backyards and basements.

"I know I've got problems with my drains. Everybody's got problems here, washing out stone walls, brick walls, anything. It's nature. You're not going to beat it till you do something about it," Joseph Knaz said.

Crews worked all day on Route 670 to unclog the drains that forced water and debris to run down onto Elm Place. Neighbors say they tried to take quick action by starting to build a dam to prevent any further damage.

"The borough actually came up and did that after the neighbor started it. They came out with the bigger machine and put more there," Tom Jackson said.

Jackson says this isn't the first time this has happened. He says he is always prepared with sandbags ready to go in his garage to help stop the mud and debris. In the meantime, there's not much he can do but wait it out.

"My neighbor has a tractor, and we'll take the dike down that they put in for us to keep the water out, and then we'll be able to get in and out." 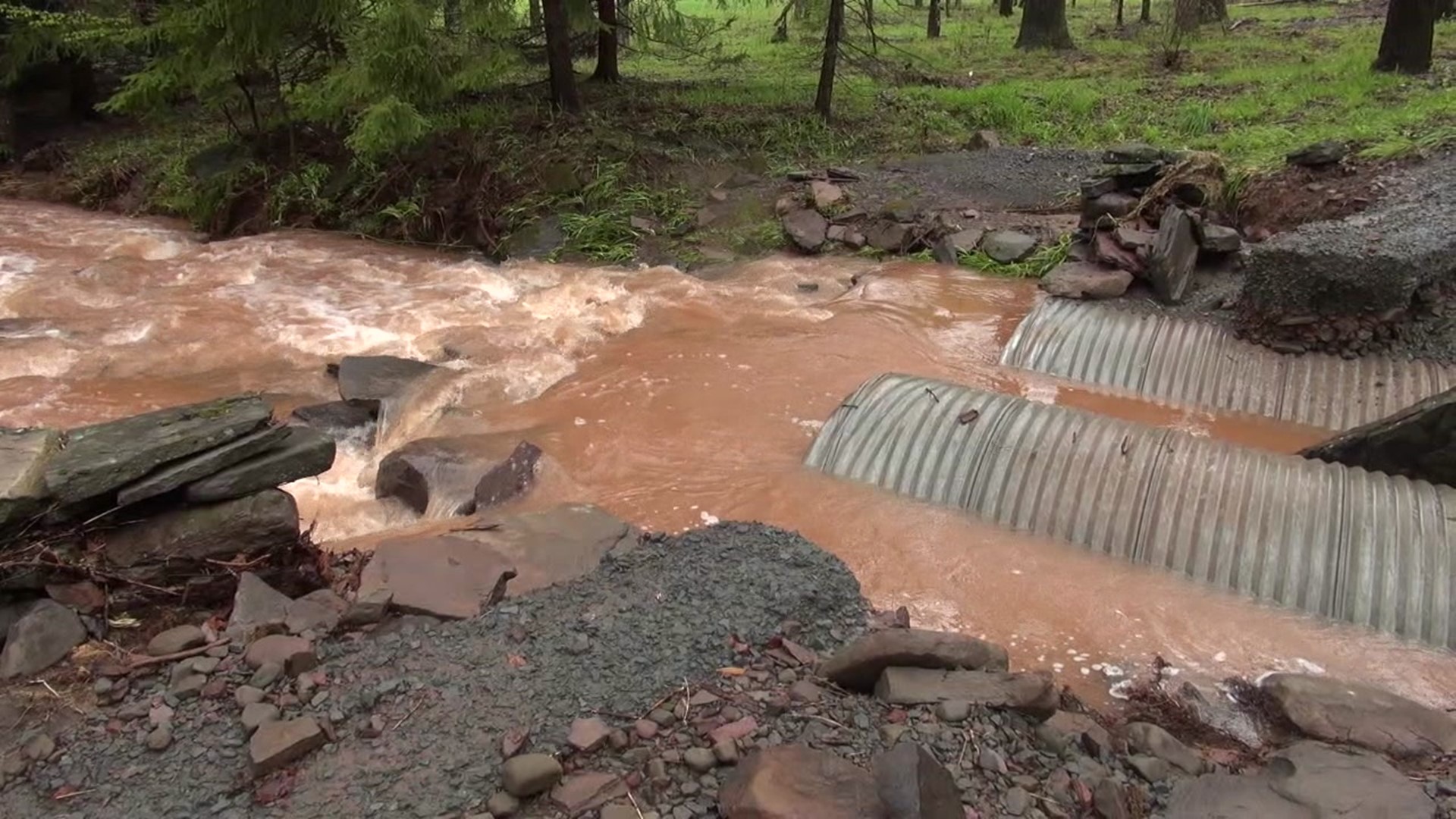 Many streams and creeks in Wayne County flowed over the banks, including middle creek road in Cherry Ridge Township.

Torrey Road in Berlin Township was in very rough shape. The powerful waters washed away the road completely, and PennDOT closed the road until they can repair it.

Brian Wilken lives on Torrey Road. His driveway was also washed away by the raging water.

Keen Lake Campground and Cottages sits on Keen Lake that was also filling up quickly from neighboring streams. The campground near Waymart just opened last weekend, and everything that was in place for guests was underwater.

"We grabbed what we could, but with the lake being so high, it's difficult. But once this recedes, we'll get back to normal, hopefully in the next day or two," Jennifer Wertz said.

Marie and George Morgan are camping at Keen Lake and had to come out and see what everything looked like after pelting rain hit their camper all night long.

"The thunder and lightning was what made us keep looking out the window. It was like, 'Oh, my God! I have never saw this this way before.'"

People say all they can do is watch and wait and hope that there is no more damage.

"Pretty much all we can do. There's really no way to lower the volume of the lake so we just kind of have to wait it out, let Mother Nature take its course," Wertz said.

The same goes for people who live on part of Torrey Road. Another section not far from this is in danger of washing away as well.

"We get some more rain; it could get interesting. Now, this way, it's kind of cut off, and there's some issues up that way. Luckily we have another road that goes out up at the back, and we get a car out, and we're able to get out."

The heavy rain is also causing flash flooding on area roads, according to PennDOT. The latest closure information is posted on the 511PA.com site.