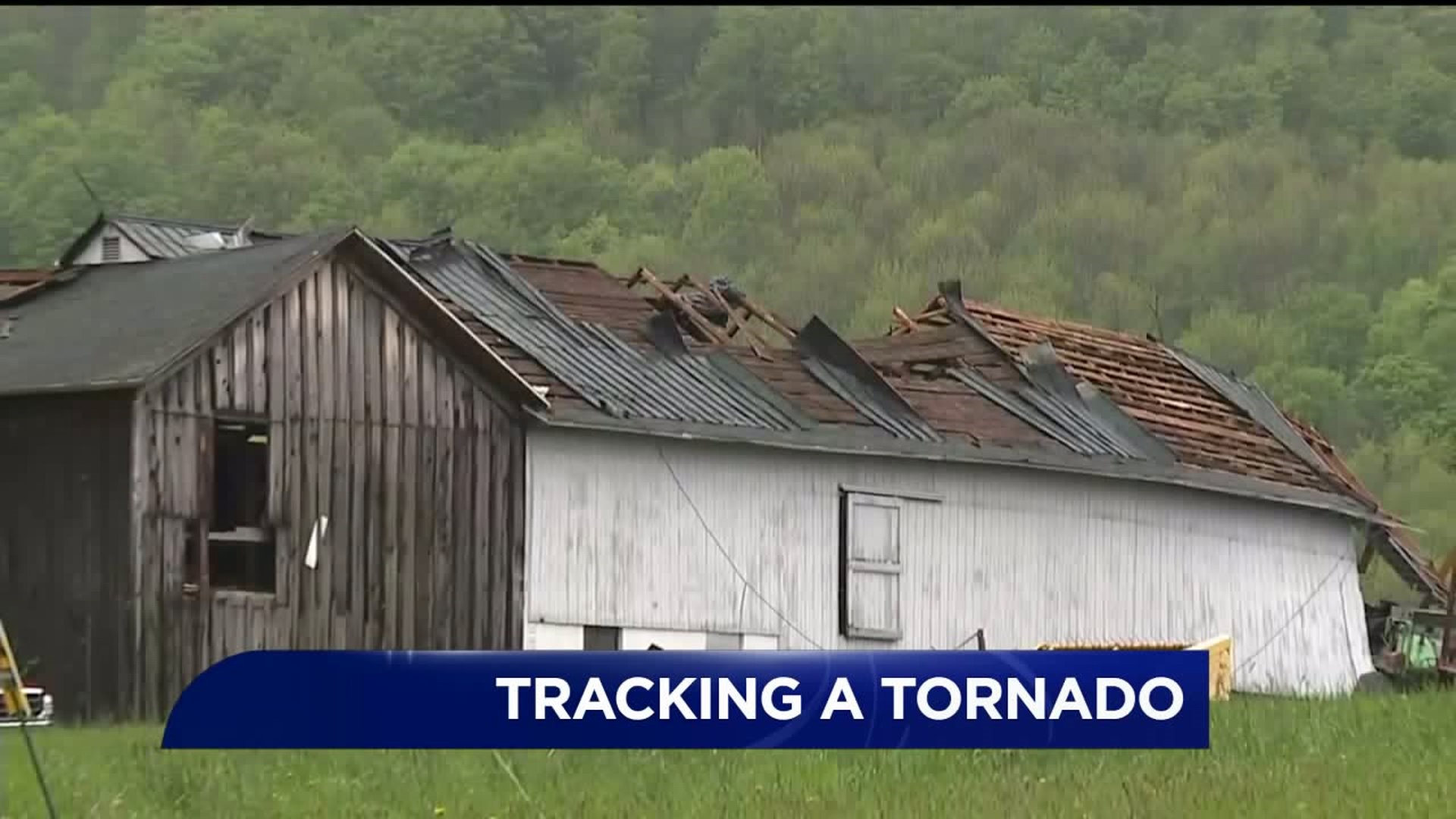 BREAKING: @NWSBinghamton confirms EF1 tornado here near Waymart yesterday. Now looking for how long it was on the ground @WNEP pic.twitter.com/g3WWHlXqUA

A team from the National Weather Service started its investigation in Waymart Wednesday morning, checking out miles of destruction.

They checked out a home missing its roof. The homeowner wasn't there when the fierce wind ripped it off Tuesday afternoon during that storm.

That wasn't the only roof that was torn off.

A barn in Waymart had its roof blown clear across Route 296. Workers were picking up large metal pieces Wednesday morning.

The damage takes a clear path from Waymart all the way to Honesdale and up through Beach Lake.

For now, it's a busy time for storm victims covering what they can from the rain after homes were damaged, roads closed, and power knocked out.

Thousands are still recovering from the powerful storm that damaged homes, knocked out power and closed roads, especially in Wayne County.

Keen Lake, a camping resort just outside Waymart, was slammed during that storm on Tuesday.

The power's still out, and the cleanup is still underway.

Crews were handling only a small fraction of the mess at Keen Lake one day after the storm brought down trees, power lines, even trapping guests in a cabin.

"Fortunately, they called they were trapped, called 911, couldn't get in because we were blocked on both sides of the road. Our staff got them out and to a safe unit," said Jennifer Wertz owner of Keen Lake Resort.

Wertz showed us all the destruction from what the NWS preliminarily called an EF1 tornado with winds up to 110 miles per hour. There's a lot to do before the resort can get back to normal, and Memorial Day weekend is sold out.

"Our infrastructure is highly damaged. Our electricity is down, pumps, everything, so I think we can do the cleanup very quickly. We have a lot of friends and good workers."

One man in Clinton Township says he had just left his home when the storm blew through, knocking his roof off and throwing debris all across the field. Even a tree was blown off its base.

"The sun was out, blue skies, next thing I know, I get a call my roof's off the house," Ludwig Bauer said.

A team from the National Weather Service in Binghamton stopped by Bauer's home, looking for signs the damage was caused by a tornado.

No matter what it was, Bauer is one of many patching things up after a doozy of a storm.

"Insurance I have. It's just time now, away from the house and trying to protect what's in there."

With all the people and property in the path of that storm, no one was hurt. Still, there's so much devastation to deal with.

"We'll have firewood for the next generation. We're safe and really it could have been worse," said Fran Wuertz.

That National Weather Service team was heading to Honesdale and then Beach Lake to look for evidence of a tornado.

There are still thousands without power. Some roads are closed or detoured. And PPL expects to have electricity restored by the weekend to some of the hardest hit areas.

Emergency management officials say the damage is widespread and PPL has given estimates of Friday for some of the power to be back on.