UPPER MAHANTONGO TOWNSHIP, Pa. — Hillside SPCA near Pottsville received a tip Wednesday about a house in question in the countryside near Hegins. Official... 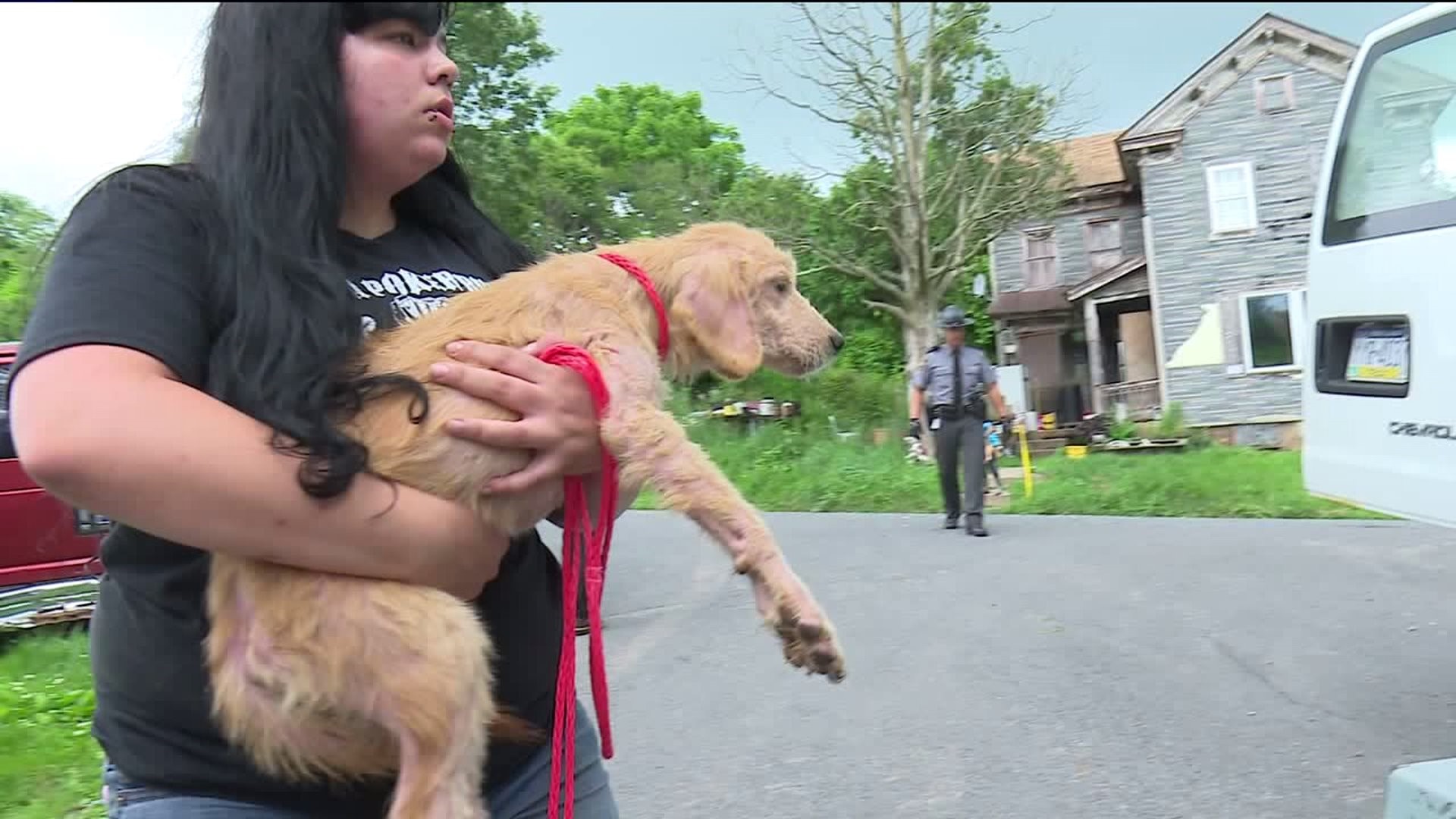 UPPER MAHANTONGO TOWNSHIP, Pa. -- Hillside SPCA near Pottsville received a tip Wednesday about a house in question in the countryside near Hegins. Officials were alerted there could be 20 dogs inside the home, but it turned out that number was just a fraction of what they'd find.

A concerned neighbor in Upper Mahantongo Township near Hegins alerted Hillside SPCA about the condition of the property on the 1400 block of Ridge Road after finding a dead dog in a nearby stream.

When Newswatch 16 arrived at the place, we could see and hear dogs inside barking for help as well as five donkeys outside in need of attention. But nobody was prepared for what was inside after a search warrant was issued.

"It makes me sick to my stomach, and whoever lives there should be locked away for a very long time," said Tricia Moyer-Mentzer, Hillside SPCA manager.

One by one, a total of 30 dogs were taken from inside and outside the home, including several puppies. Two of the dogs rescued were missing eyes. The rest all had mange and were malnourished. They were also riddled with fleas, skin infections, and reeked of a strong stench.

"I haven't seen anything in this capacity since probably 2009. This is the largest amount I've seen in about a decade. This is pretty bad, and it's a lot of animals," Moyer-Mentzer added.

"I actually started crying once we walked into the house after seeing all the puppies just lying in their own feces," said Haley Weist, Hillside SPCA employee. 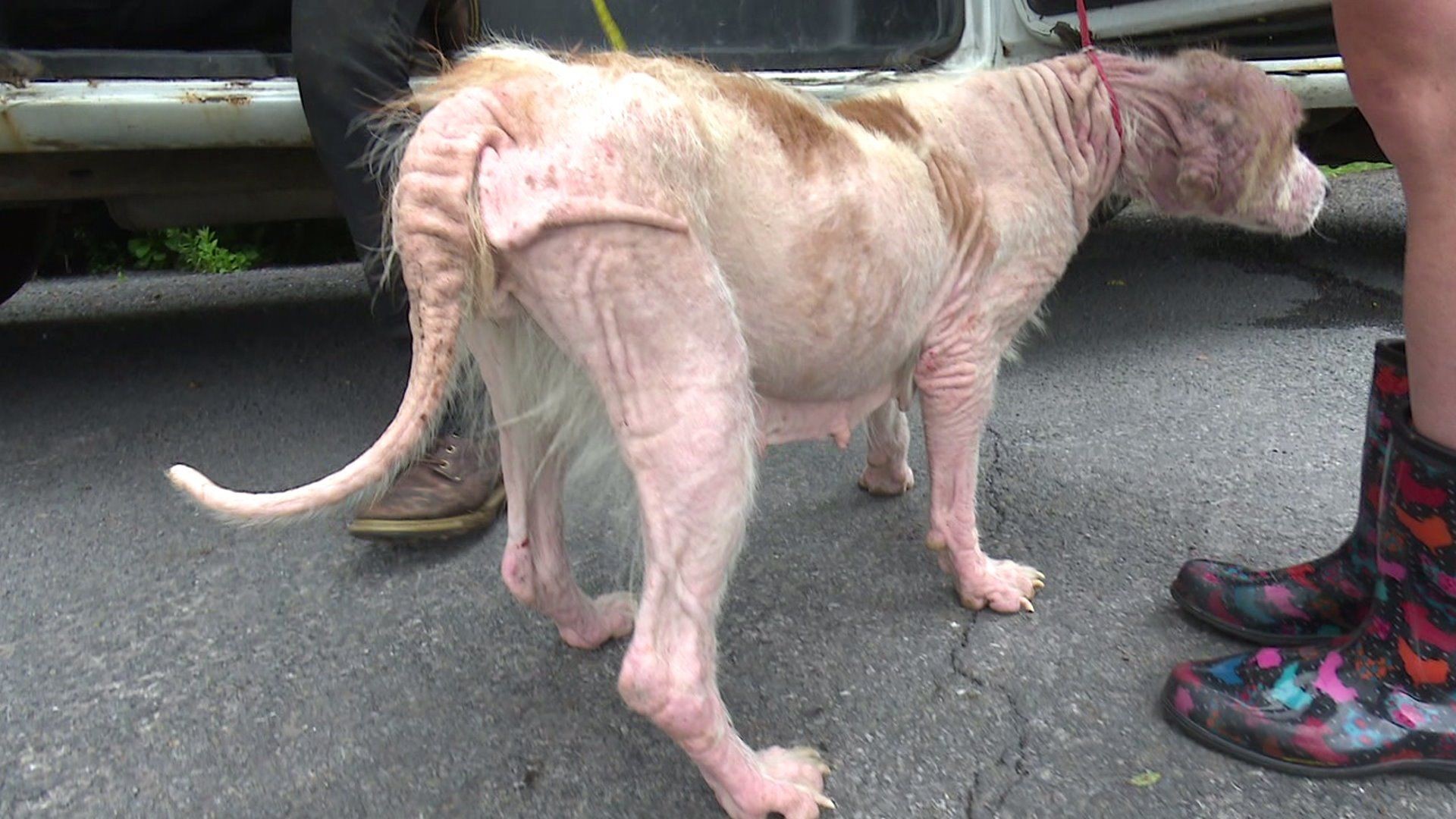 Hillside SPCA employees say the smell inside the home was putrid. They ended up rescuing cats and dogs as well as five donkeys and a goat. Two dead goats were also found at the home.

"It's just gross. Grimy, flea-ridden, really, really awful smelling. The dogs are beyond filthy. It's just really a gruesome scene inside the house," said Moyer-Mentzer.

"I'm not sure if any of the dogs that were inside saw sunlight at all. The four dogs that we got outside they wouldn't stop kissing our faces," Weist said.

In all, 43 pets were rescued from the home. Many more animals were found dead on the property. The ones that survived were taken to Hillside SPCA. The shelter was full, so employees spent five hours making sure the place was ready to take in 30 dogs and seven cats.

"Luckily enough, our small dog area numbers are pretty low right now, so I was able to tell the staff there to prepare any available space," explained Lindsay Cohan, Hillside SPCA employee.

Perhaps the most troubling discovery was the remains of dead dogs found stuffed in barrels.

"They were covered in newspaper, and then when you dig farther you saw bones. We actually found another dead dog there. Its skull was decapitated from the rest of the body," said Weist.

Employees with Hillside SPCA say the owner of that filthy house is Vincent Weist who investigators have not been able to track down, but people who live in the area say they've seen him around the property recently. State police are still looking for him. He is facing several charges including animal cruelty and operating an illegal kennel. According to Pennsylvania state law, a person can't have more than 25 dogs without a license.