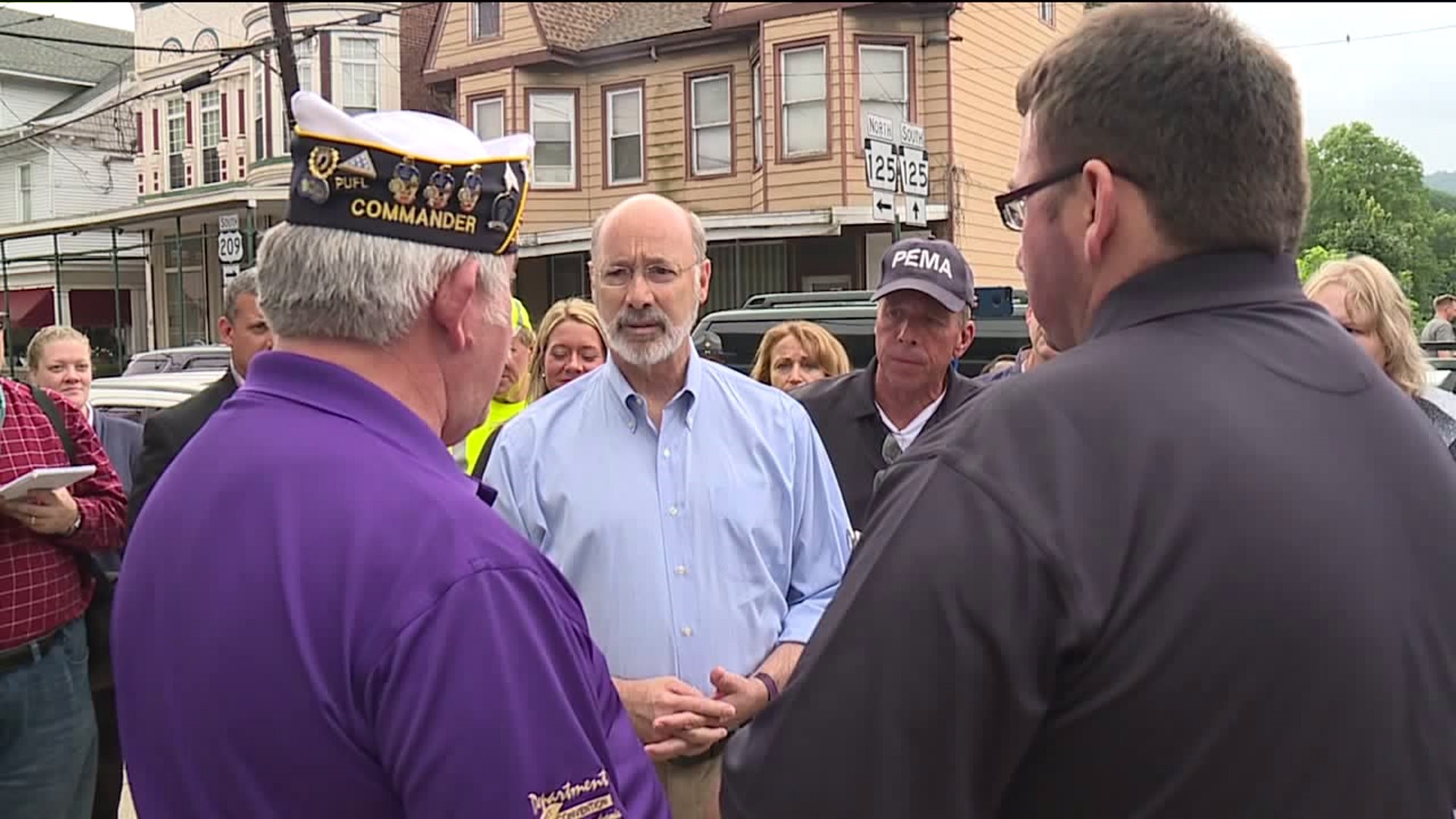 Governor Wolf started his tour of the flood damage in Tremont then made his way to Pine Grove.

The sunshine was a welcome sight in Tremont after days of rain and flooding.

"Honestly, I think it's done," Robert Wojcik said. "I think the creek can handle it. As long we have breaks like this, dry, sunny days, we should be alright."

The cleanup and recovery process has started in Tremont. The borough has brought in dumpsters to help people throw away their stuff.

Many of the people in Tremont took a break from cleaning to greet Governor Tom Wolf. He took a tour of the damage in this part of Schuylkill County.

The governor and state DEP officials took a look at Swatara Creek which has caused the flooding this week in Pine Grove.

In Tremont & Pine Grove this morning with @PEMADirector Flinn to tour areas affected by flooding after this week's heavy rains and to get updates on recovery efforts. Thank you to first responders and state & local emergency personnel for working tirelessly to keep PA'ians safe. pic.twitter.com/XWHmSlatrw 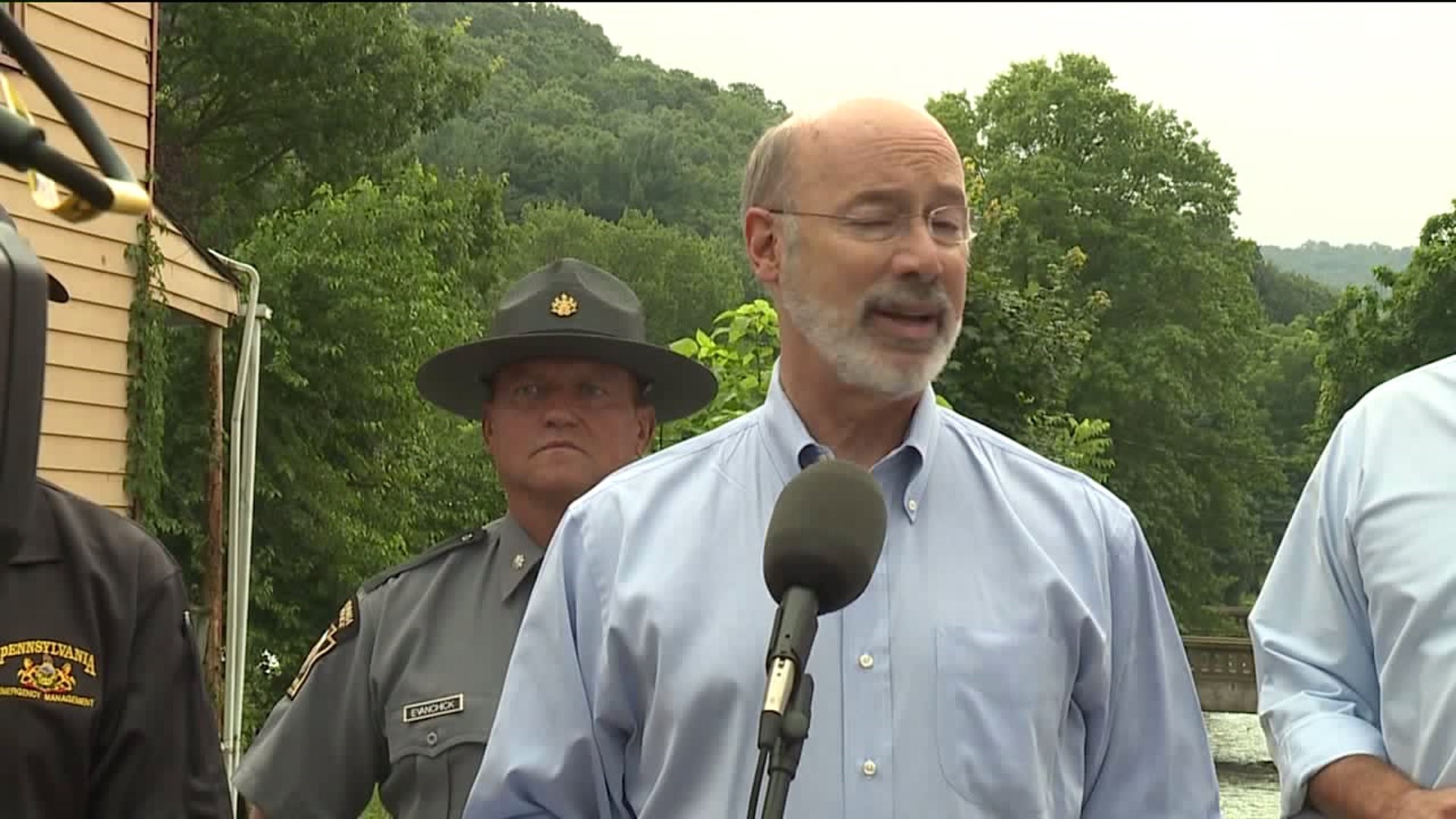 "I'm here, everybody is here for two things. To show concern, everyone is concerned about what happened here. This area and central Pennsylvania got hammered with a lot of rain so we want to show solidarity with our fellow Pennsylvanians who got hurt and I also want to find out what we can do to help," Gov. Wolf said.

While Governor Wolf was in Tremont, his first stop was at the ambulance building where the borough's emergency shelter has been set up. He then spoke to the members of the American Legion Post 384. A portion of the Legion was badly damaged by flood waters this week.

"It's still going to take a long time before we hear anything. We're just going to have to wait and see," said post commander Tim Murphy.

While many people were happy to see Governor Wolf, there were people who were not.

"He was only down at the Legion and up at the ambulance building. So, it don't mean much to me if he was here because he wasn't here checking out the main damage which was here on Spring Street," Wojcik said.

After checking out the damage in Tremont, the governor spent part of his day looking over the problems caused by high waters in nearby Pine Grove.

In Pine Grove, all eyes have been on Swatara Creek. Heavy rainfall this week caused the creek to flood several homes and businesses in the borough, including Abrams Automotive.

"It goes down, pretty soon, it's coming back. That's Swatara Creek. It's too full of dirt. They've got to get it emptied," said Dave Abrams.

Gov. Wolf took a trip to Pine Grove to take a look at the flood damage and to inspect the creek. He says the visit was a show of support to the people affected by the water.

"We have a whole lot of work to do and a lot of things to find out. So, we're all here to do the best we can," said the governor.

"This effort is going from recovery to relief to remediation and it's time for us to get shovels in the ground and we do our very best to make sure these communities are safe," added Rep. Mike Tobash, (R) Schuylkill County.

The people of Pine Grove believe Swatara Creek would stop flooding if it was cleared of debris. Newswatch 16 spoke to a representative from the DEP who says a solution may be coming soon. The agency says it will take a look at the creek after the water recedes.

"Whether it's removing some of the debris that has accumulated, if there are pockets of sediment that have accumulated that make sense to remove, we can authorize that work under an emergency permit," explained DEP regional director Mike Bedrin.

In addition to the DEP's immediate plan, Pine Grove was also awarded a grant earlier this summer for a restoration project that would alleviate some of the flooding in the area.

"We can't keep going like this," Abrams said. "Pretty soon, Pine Grove is going to be like another Centralia. There is just not going to be anything left."

Work on the flood restoration project in Pine Grove is expected to begin sometime next year.