MILFORD — A crowd cheered outside the Pike County Courthouse in Milford as accused cop killer Eric Frein was brought before a judge and charged wit... 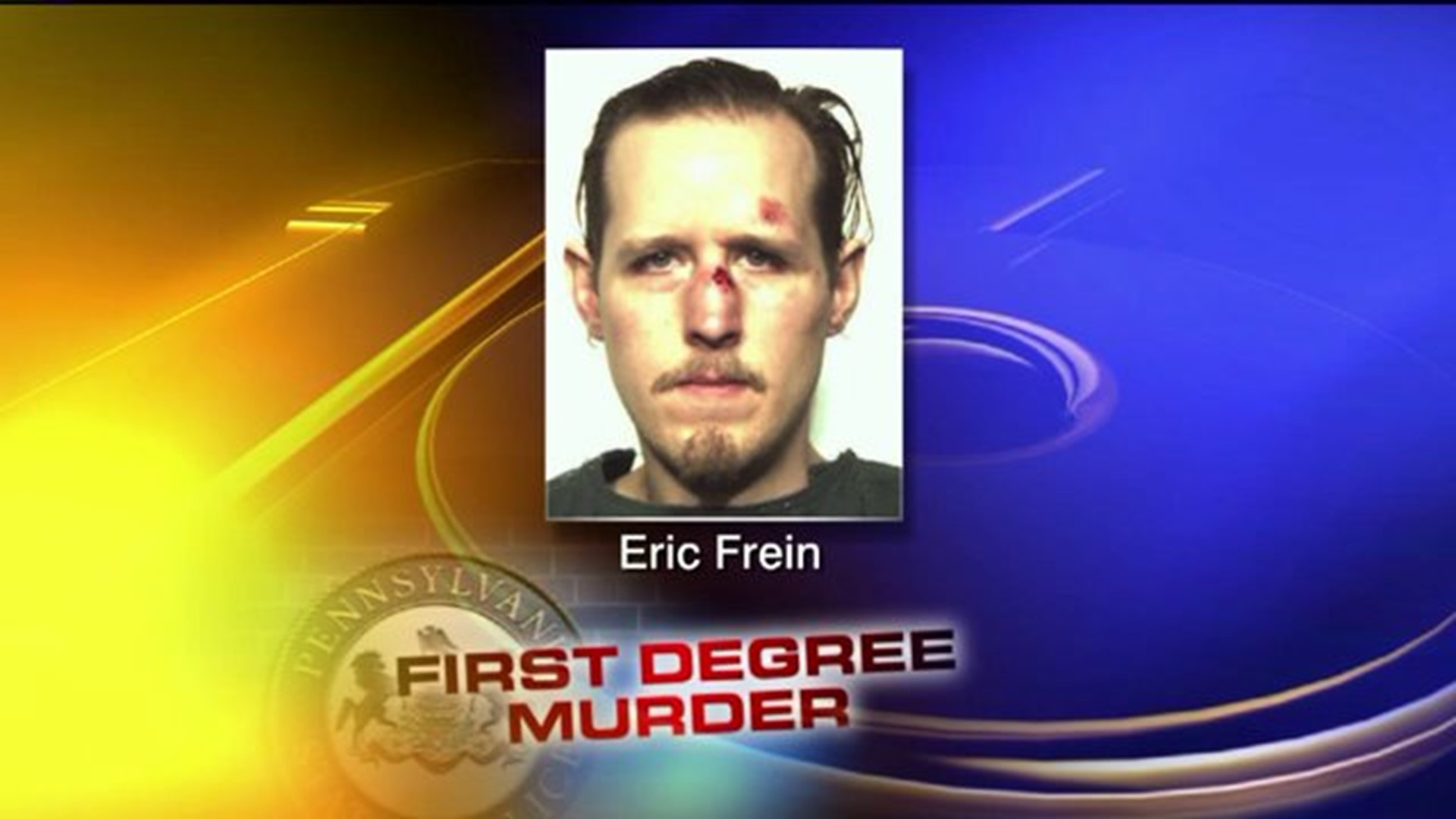 MILFORD -- A crowd cheered outside the Pike County Courthouse in Milford as accused cop killer Eric Frein was brought before a judge and charged with first degree murder.

After nearly seven weeks of searching, a suspected cop killer is locked up.

Friday morning, charges including murder in the first degree were formally brought against Frein.

It was a brief but important first step in the judicial process now that Eric Frein has been captured. A preliminary arraignment was held at the courthouse in Pike County.

Those hearings are usually held at a district magistrate's office but because of the high-profile nature of this case, the security concerns, and the amount of media who are here to cover this case, the arraignment was moved to the courthouse in Milford.

Frein was escorted into the courthouse in Pike County, as the crowds cheered and shouted at the man state police say shot and killed one trooper and badly hurt another seven weeks ago outside the Blooming Grove barracks.

It was a routine sweep by U.S. Marshals that finally led to Frein's capture.

He was found around 6 p.m. Thursday near an airplane hangar at the old Birchwood Resort near Tannersville in Monroe County.

"A team was sweeping through the area, surprised him as he was outside of the hanger, gave him commands to surrender, he complied with those commands and was taken into custody," explained Lt Col. George Bivens, Pennsylvania State Police at  a news conference after the arraignment.

Frein was taken into custody in Pocono Township and brought to the Blooming Grove barracks.

Lt. Col. George Bivens was at the helm of the search for seven long weeks. He says his teams planned for that exact moment when Frein was finally found unarmed by U.S. Marshals outside an airplane hangar in Pocono Township.

Bivens wasn't at the command post Thursday night and got a phone call. The plan went into action.

"There was a whole pre-plan that we had put together on how to deal with his capture when that occurred, so we immediately implemented that," Bivens said.

The old Birchwood Resort near Tannersville was where he was taken into custody.

In the daylight we got our first good look at Frein, a gash across his nose, and bruising above his one eye.Troopers assure us Frein had those injures before they caught him.

"When he was taken into custody I can assure you he was treated humanely, and was treated properly and was transported without further injury by law enforcement," said Bivens.  "There was no struggle with law enforcement. He has talked to us about some things that occurred to him while he made his way through the woods and so forth over that 40-plus day period. But that was an injury that occurred to him at some point in his flight."

A district judge read the charges against Frein at a formal arraignment Friday morning. When Frein was asked if he understood the charges, he simply replied with emotion, "Yes, I do."

The hearing was held at the county facility because of security issues, and the massive amounts of media covering the case.

Pike County's sheriff says he helped secure the more than 300 people who were in the courthouse.

"We actually take it very serious, as you see. Today we've processed 300 people within 15 minutes. So we have x-ray machines, metal detectors. There were deputies every 20, 30 feet," said Pike County Sheriff Phil Bueki. "It was very emotional for us. I was on the scene within a half hour of the shootings and we've been working every day with the state police."

The crowds were emotional as well.

"He deserves what he gets. I hope they don't let him sit in jail long, I hope he gets it right way," said Todd Kowinsky.

Bivens says Frein was arrested in his victim's handcuffs and taken away in Dickson's car. It was all part of the plan, something that begins to bring closure.

"He was an aggressive, hardworking member of the state police and he would have been the first to go out and arrest and apprehend someone who had done this to one of his fellow troopers."

Frein now heads back to the Pike County Correctional Facility in Blooming Grove Township, aware of the charges he faces and waits for the next step in the case prosecutors and investigators plan to bring against him.

That next court appearance is scheduled for November 12 but that could be delayed.

Lt. Col. Bivens says he plans to be in Barrett Township Friday night thanking the community for their support and handing out Halloween candy.

Click here for complete coverage of the search and capture of Eric Frein.