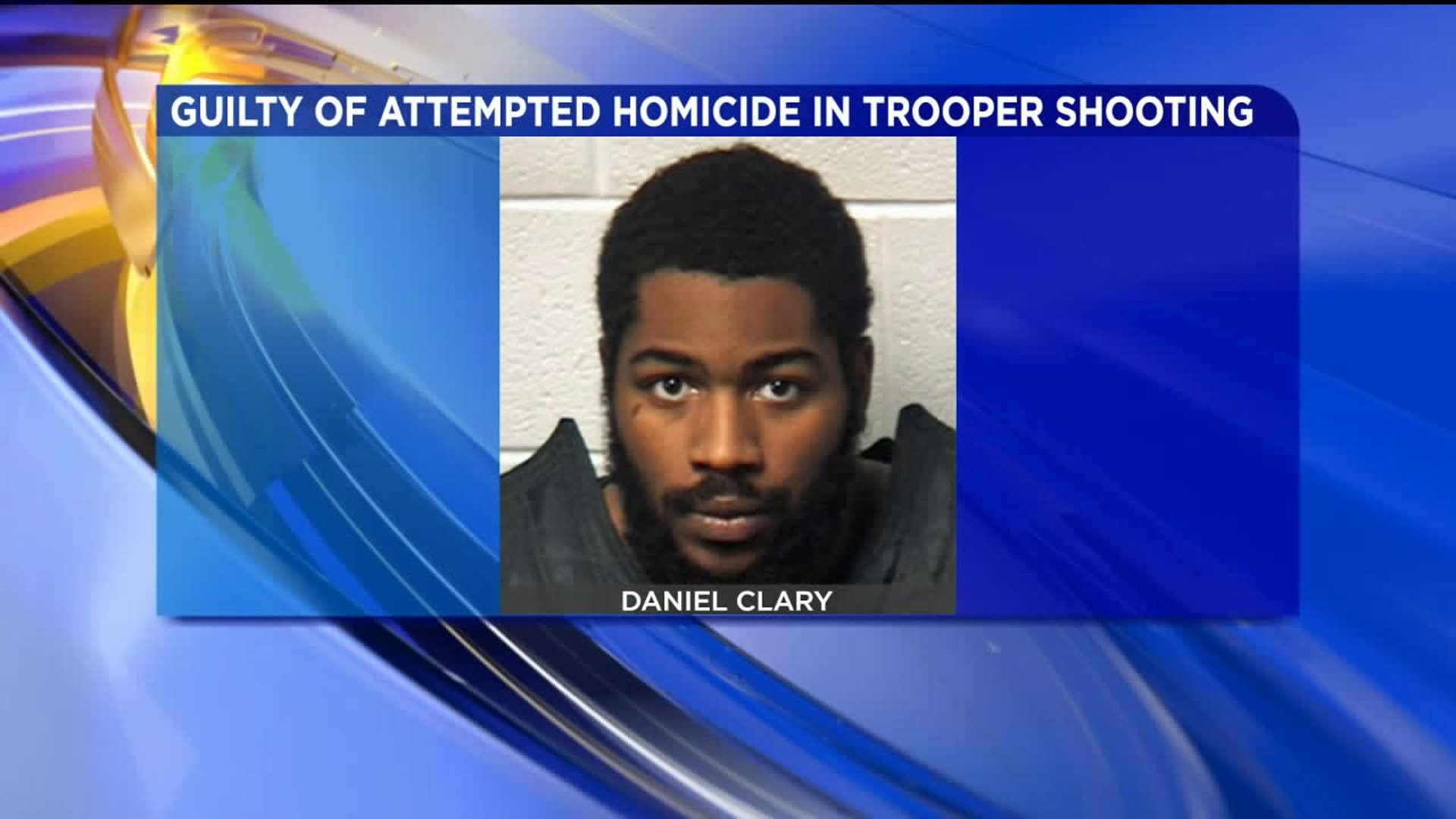 EASTON, Pa. -- A jury has found Daniel Clary guilty of attempted homicide in the shooting of Pennsylvania State Police Corporal Seth Kelly on a road last year in Northampton County.

In a packed courtroom inside Northampton County Court, a jury found Daniel Clary guilty on nine of ten charges against him.

Among those charges -- attempted homicide of a law enforcement officer.

#BREAKING Daniel Clary has been found guilty of 9 of 10 charges against him including attempted homicide of a law enforcement officer. He was found NOT guilty of DUI. @WNEP pic.twitter.com/GU5CfXHpkN

Kelly was one of two troopers involved in that traffic stop on November 7.

Police say Clary was pulled over for speeding by Trooper Ryan Seiple.   After it was found he may have been under the influence, Clary and the troopers began physically fighting on the side of the road.

After fighting with officers and freeing himself from their restraint, Clary grabbed a gun and fired it at Tpr. Seiple and Cpl. Kelly.

Both troopers were able to shoot back but Clary managed to get to his car and drive to a hospital.

Cpl. Seth Kelly was severely injured and is still recovering from the shooting. He testified Thursday.

Cpl. Kelly is a 13-year veteran of the state police and a native of Wayne County.

Corporal Seth Kelly, who was severely wounded during the shootout, walked calmly and quietly out of the Northampton County Courthouse after the jury found Daniel Clary guilty of attempted homicide of a law enforcement official among other charges. @WNEP pic.twitter.com/oERbRzqsUw

Cpl. Kelly left the courtroom calmly and quietly after the verdict was handed down.

Members of the state police say this is a day to remember.

"For my troopers that were involved in this incident, Cpl. Seth Kelly and Trooper Ryan Seiple specifically, November 7, 2017 is a day that they are never going to forget. It's a day state police will never forget. We basically had a member of our department die along the side of the road that day," said Capt. Richard D'Ambrosio, Pennsylvania State Police.

All week long, the prosecution called witnesses, including forensic specialists, nurses who treated Daniel Clary, as well as both Trooper Ryan Seiple and Cpl. Kelly.

"You're seeing a guy that fought through death, died, and came right through it. It's got to be a pretty inspirational thing, especially when the last time you saw him prior to coming into the courtroom. It was him diving over a guardrail dying," said Northampton County ADA Terry Houck.

The prosecution called witnesses and went over evidence that was found on Route 33, as well as evidence found at the hospital in Easton where Daniel Clary drove himself.

While there was a lot of evidence collected on Route 33 where the shootout took place, the prosecution says it was the dashcam video on the troopers' vehicle that really helped the case.

"The video was critical, but the behavior of the police on that video is what was most critical. Had that video not been here, it would have been the word of one man against the word of the Pennsylvania State Police, and in this day and age, we know how stuff like that goes and that video confirmed everything that the police said and did," said Houck.

Clary's defense decided not to call any witnesses and in closing arguments said he was trying to defend himself.

Defense Attorney Janet Jackson represented Clary and described how he felt after the verdict was read.

"He accepts responsibility but we felt that we had a valid self-defense argument and we thought that the charge to the jury was not as it should have been," Jackson said.

Even though it only took members of the jury less than two hours to decide the fate of Daniel Clary, both the prosecution and defense believe they did their job.

"He was calm. I think he understood that this was possibly going to be the verdict in this case and like I said, I think the jury did its job," Jackson said.

A sentencing date for Daniel Clary has not been set but the district attorney's office believes it will be sometime this fall.