Leukemia and lymphoma student of the year nominee

A student in Lycoming County has been nominated for a big award for the Leukemia and Lymphoma Society's student of the year. 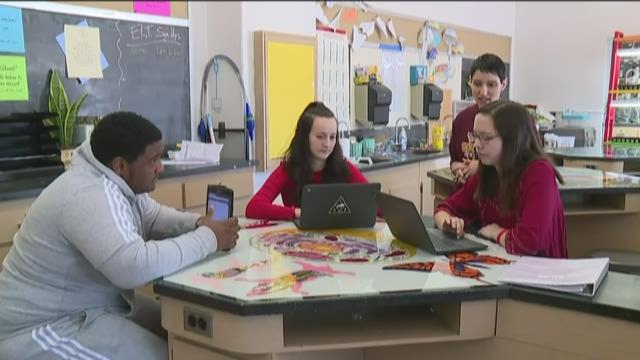 WILLIAMSPORT, Pa. — Juliana Kriner was nominated for the Leukemia and Lymphoma Society of Central Pennsylvania's Student of the Year award. For the past few months, Kriner has been fundraising and raising awareness about these cancers.

"I am competing alongside eight other students in the central Pennsylvania area to raise funds and research for leukemia and other blood cancers," Kriner explained.

Kriner told Newswatch 16 that her aunt was diagnosed with leukemia 12 years ago, so this nomination means the world to her.

"12 years ago when she was diagnosed, without LLS's research and just their support and grants and funding, she wouldn't be here today."

Kriner is currently a junior at St. John Neumann Regional Academy in Williamsport. She is asking all her classmates to help her cause.

In support of Juliana's cause, students at St. John Neumann donated $2 to get out of their uniforms and into some casual clothes for the day.

"Some students hate wearing the uniform, I like it personally, I don't have to pick out what to wear every day, but she made it possible for us to dress down today, $2 only it was real simple and it helps the foundation," said junior Keon Burkholder.

"Not only did they want to dress down, but some students gave more than the $2 that was asked, so their generosity was certainly overwhelming," said St. John Neumann Principal Alisia McNamee.

"A lot of people who I didn't think would want to donate, they donated $10, $15 and it meant a lot coming from students my age to see them giving up their money that they worked for and earned just in order to support me and this amazing cause to fight blood cancer," Juliana added.

If you would like to help support Juliana and her cause, you can find more information here.