WILKES-BARRE TOWNSHIP, Pa. — The U-Haul on Mundy Street had some of the most severe tornado damage. Some of its trucks were flipped and its roof was rippe... 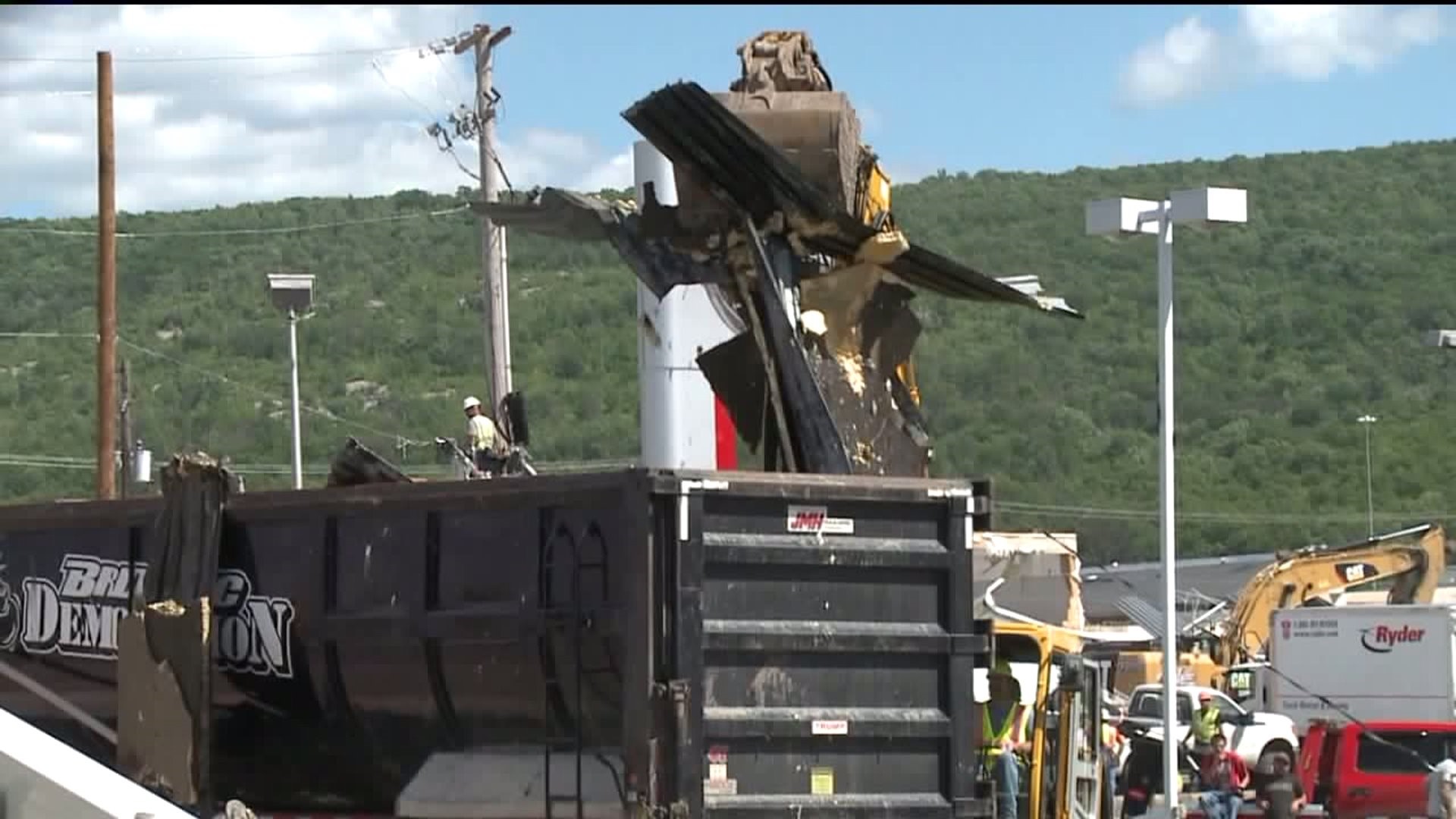 WILKES-BARRE TOWNSHIP, Pa. -- The U-Haul on Mundy Street had some of the most severe tornado damage. Some of its trucks were flipped and its roof was ripped off before it was leveled.

Boxes of personal belongings ended up on the roof of the wrecked U-Haul store and storage facility on Mundy Street after an EF2 tornado ripped through the place with winds of up to 130 miles per hour.

"You turn the news on and you see all this damage and it looks like, I was in earthquakes before living in California, and it looks just like the damage from an earthquake," said Thomas McKenzie.

Heavy equipment was brought in to clean up debris near the Ken Pollock Nissan on Mundy Street and lots of people from all over stopped by to take a look.

Jo Anna Shovlin is originally from Wilkes-Barre and drove up from Harrisburg.

"I'm coming up here because I can't believe 40 years after the Agnes flood another tragic episode comes to the Wyoming Valley," Shovlin said.

U-Haul employees say they're letting people with storage units come by Saturday to take their belongings. They say, surprisingly, the pods weren't damaged as badly as the rest of the store. Some of their trucks were blown away.

"I mean Mother Nature, it's beautiful to look at but when you see the damage she can do, but fortunate we didn't have any casualties of life," McKenzie said.

Jay Kittrick is an independent insurance adjustor and wanted to see the destruction for himself. He isn't working with U-Haul but says it's going to be a long road to rebuild.

"Something like this will probably take a couple of months before they get it settled, if not longer," Kittrick said. 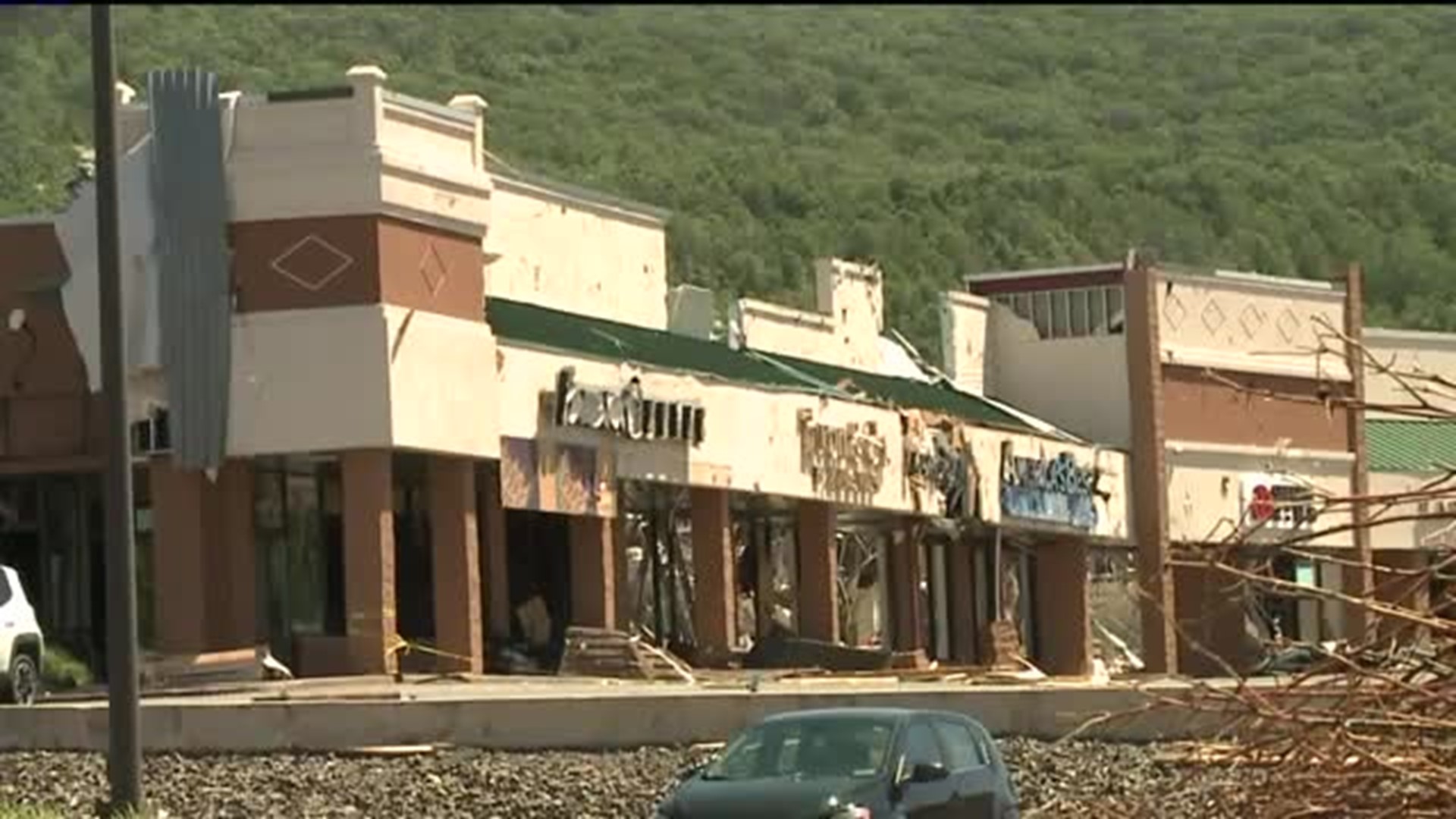 "All my contractors that I deal with on a continuous basis, they're calling me up saying, 'where do we go? where do we report?'" Tamburro said.

Insurance adjustors looked at some of the buildings in the plaza with a safety team to get an idea about if and when they can reopen. Tamburro is from the Wyoming Valley and spent a lot of time developing the area.

"I was here when this was trees and there was no infrastructure up here and it was dirt! We're still a lot farther ahead than we were 20 years ago but we'll get it rebuilt."

Even though contractors have a lot of work on their hands, like cleaning up parts of metal roofing, the owner says they've made a lot of headway in a short amount of time.

"There's a personal touch with these folks that I think is very helpful and is helping us getting back on our feet faster than we probably would have if it was just a big corporation moving into another ABC town."

Despite the destruction caused by the tornado and its winds of about 130 miles an hour, Tamburro says he's thankful for one thing: no one was seriously hurt.

"You could put these buildings, they start as a million pieces and you build that. It's very difficult to put a person back together. That's what we're grateful for and the rest of this stuff will take care of itself," said Tamburro.