Some say they prefer the weather in September, though celebrating at this time "seems kind of weird." 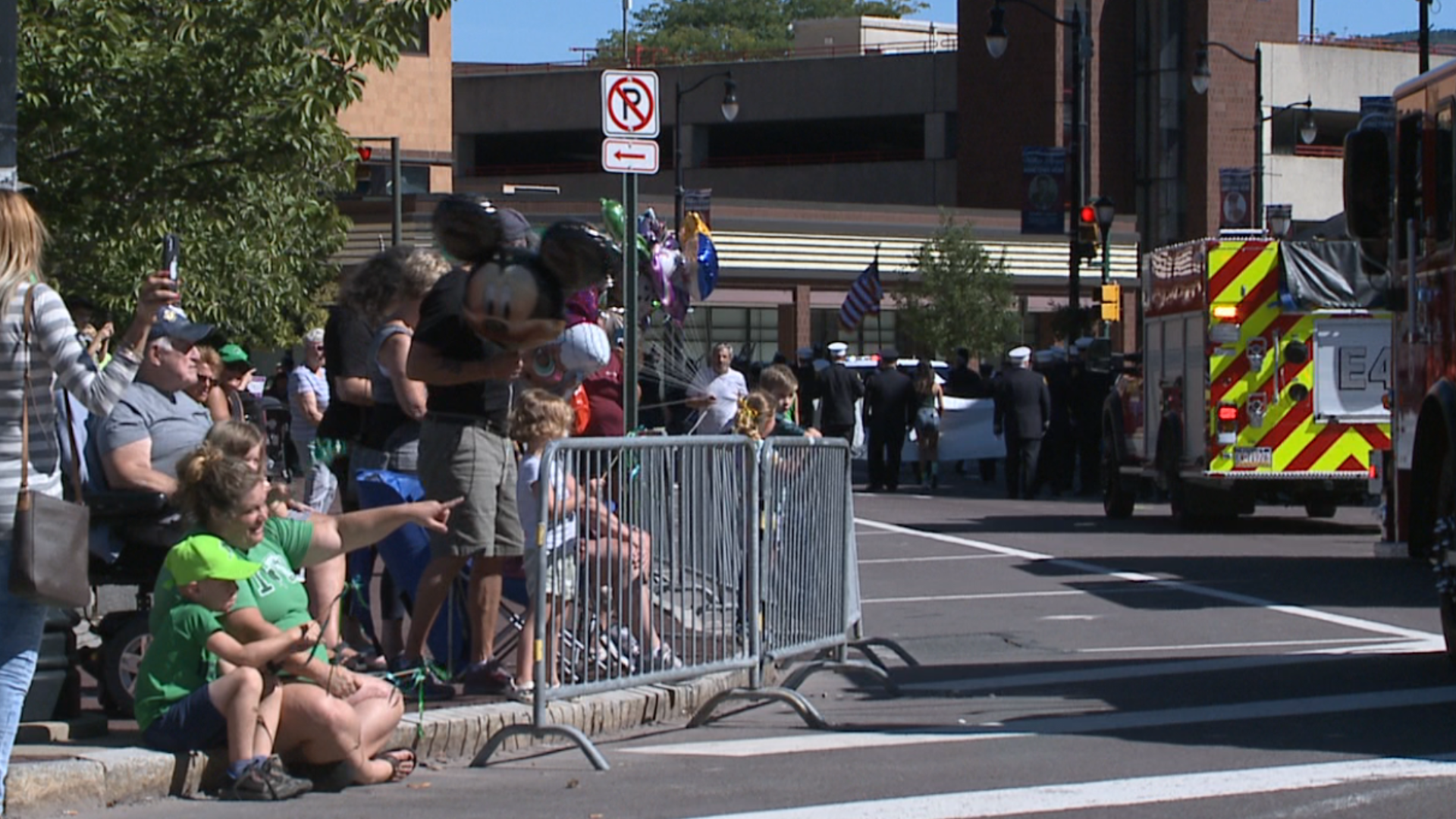 WILKES-BARRE, Pa. — Following Saturday’s St. Patrick’s Day Parade in Scranton, the sun shined on a second celebration on Sunday – this time in Wilkes-Barre.

Despite much warmer temperatures than the typical March date, the Diamond City saw smaller crowds than usual.

With sirens, loud music, and dancers – the City of Wilkes-Barre let everyone know: St. Patrick's day is in September this year.

“We needed this to bring us together,” Doloras Myers of Wilkes-Barre said.

Adults, kids, and even pets were decked out in green. Braxton Baker, 6, of Larksville described his outfit to Newswatch 16:

"A fake mustache, St. Patty's Day glasses, and a necklace and tattoos."

Now in its 41st year, many tell Newswatch 16 the parade – postponed in March and canceled the year before due to the pandemic – is much needed.

RELATED: Scranton's St. Patrick's Parade back on in the Electric City!

"This is awesome,” Doloras Myers said. “I wasn't going to come out because no masks, this and that, but I'm meeting people along the way I haven't seen in a long time."

"Whatever your nationality is, everybody's Irish on St. Patty's Day,” Dave Cunningham of Edwardsville said.

Cunningham was at the parade with his 11-year-old daughter, Ireland, named after their heritage.

But parade-goers also acknowledged this wasn’t a typical St. Patrick’s Day celebration, with fewer people attending this time around.

"I would say it's less than 50 percent of the normal here. Just like up in Scranton,” Ed Perenga, of Wilkes-Barre, said.

Officials say this is normally one of the biggest events of the year for the city. But having it in September when school's back in session – and parents and others may be at more sporting events – could be one of the reasons for the smaller crowd.

Perenga says he thinks the pandemic itself is a large reason for the smaller celebration.

"I think people are still spooked and everything,” he said. “We were kind of too, but we keep our distance, and there's plenty of distance today."

Meanwhile, Perenga and others say they were happy to join the event on a beautiful early-fall day.

“I like hot weather, warm weather. So you don’t have to worry about bundling up,” Perenga said.

"We have a nice, sunny day. In March, it's more or less, depending on the weather, whether it's colder or not,” Dave Cunningham said.

Though, Cunningham said it’s strange to celebrate the March holiday in September.

“It seems kind of weird, you know, going into the fall months, and we’re celebrating St. Patty’s Day.”

Still, some things about parades never change. When asking the kids what they love most:

Even though this year, the event itself marched to a different beat of the drum.