SHICKSHINNY — Some parts of the mountains in several counties in our area look more like winter than spring because gypsy moth caterpillars have defoliate... 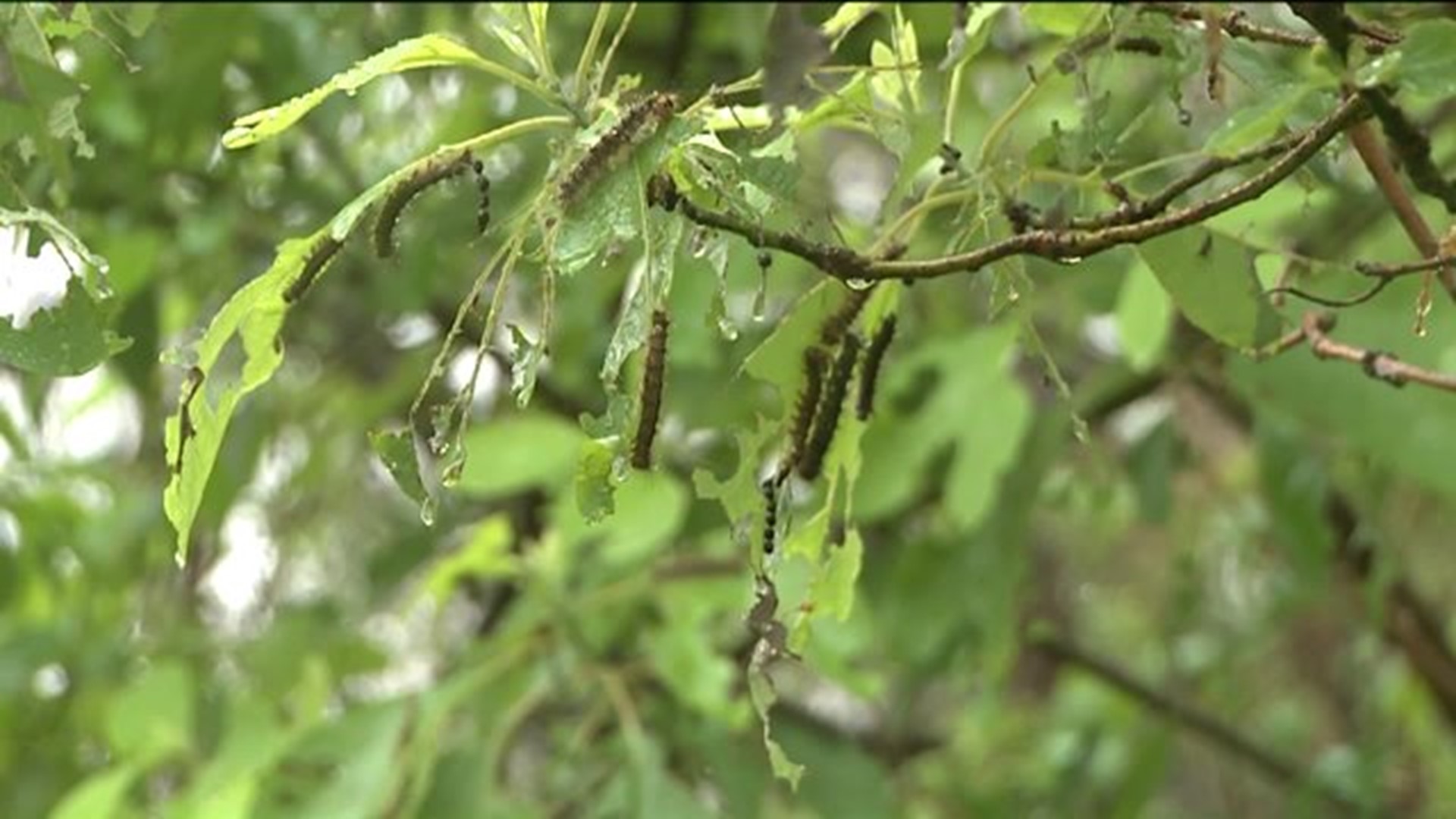 SHICKSHINNY -- Some parts of the mountains in several counties in our area look more like winter than spring because gypsy moth caterpillars have defoliated the trees.

This damp rainy weather might help stop their surge, but in the meantime  businesses that sell pesticides are declaring war.

The state has done some spraying for gypsy moth caterpillars on state forest and state game lands, but that doesn't help homeowners watching the leaves get wiped out on their trees.

There are products available to help fight back against the bugs, at least try to.

If you look closely at what's left of the leaves on some trees around here, you'll see gypsy moth caterpillars everywhere gobbling up all the green.

On the hillside overlooking Shickshinny much of it is brown, with many trees in this area bare.

"Terrible, terrible, you can look up the mountain and see it's devastating. They're just cleaning everything out," said Roland Confer.

Confer lives at the base of that mountain.

"I go up to the mailbox and you can hear them eating and see them all over the leaves on the trees."

While the bugs are battling the trees, some people are fighting back. Check out the sign at Nescopeck Agway: "Kill gypsy moths now!"

The battle with the bugs! But judging by the bare hillsides in some areas, I think the gypsy moths are winning. pic.twitter.com/JIamT9VOGR

"It's quite a problem this year. A lot of homeowners are coming in with concerns of the gypsy moths in their trees," said Amanda Lehman at the Nescopeck Agway.

On display right in front are products to kill the caterpillars, including a sticky substance and burlap to catch them climbing the tree trunks, a spray to kill them in the leaves, and a trap to capture them once they are moths.

"I would tell people if you have a specific tree that's very special, maybe a weeping cherry that's in your front yard, make sure to do something to protect that specific tree," Lehman said.

While there are ways you can fight the gypsy moths, if you live in a wooded area where the bugs are all over the place, it is a battle you're going to lose.

Foresters say one thing that can destroy these defoliators is a fungus that thrives on wet weather. We have had some of that this week, but even if that works, much of the damage is done. An invasion that left its mark, and one that's left people in the heart of the bug battlefield feeling a bit defeated.

"Everywhere you go, you go to sit down or you go in your house and you have them on you," said Salem Township resident Sharon Featherman.

State foresters say a tree can survive a couple years of attack by the gypsy moth caterpillars, as long as they are a strong tree.

Most of those trees that lost their leaves should grow them back again this summer.

The state DCNR website on gypsy moths is here.

Download a pamphlet of information from the state here.