SCRANTON — On this 75th anniversary of the attack on Pearl Harbor, veterans were honored in Lackawanna County. The county began its process of putting tog... 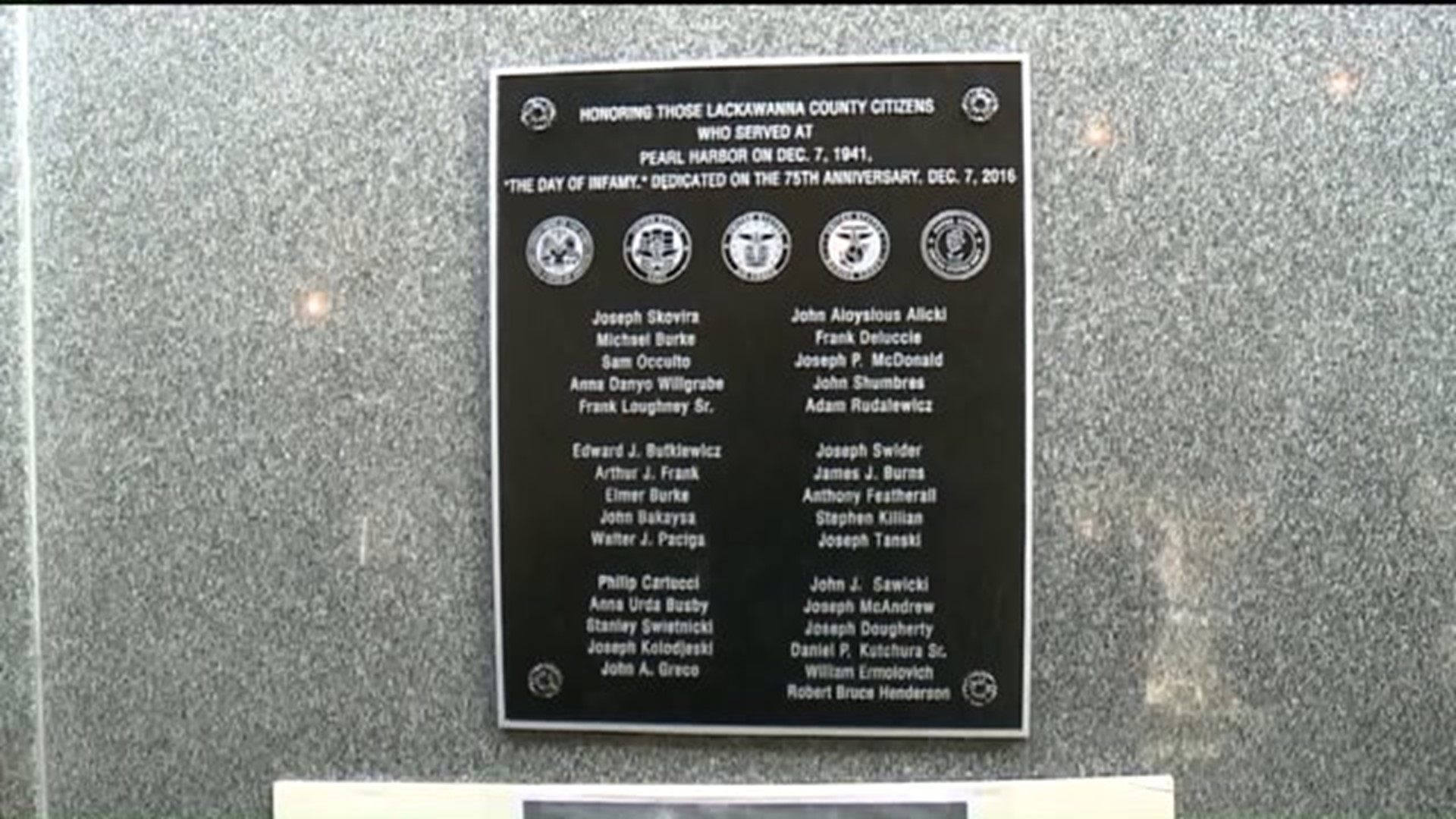 SCRANTON -- On this 75th anniversary of the attack on Pearl Harbor, veterans were honored in Lackawanna County.

The county began its process of putting together a Pearl Harbor commemorative plaque two years ago, but the number of people eligible to be on that plaque has doubled in just the past few weeks.

The Lackawanna County 9/11 Memorial Committee started that process two years ago with the goal of dedicating the plaque on the 75th anniversary of the Pearl Harbor attack.

The plaque was cast with 31 names of Lackawanna County residents who served at Pearl Harbor.

That number is actually about 65 and could continue to go up, so this plaque will soon be removed and replaced with a bigger one.

The names make up an exclusive club that's still growing, names that have long needed some kind of special recognition.

After 75 years, they got the salute they deserved. Lackawanna County's 9/11 committee has been planning this event for two years, compiling a list of county natives who served at Pearl Harbor between 1938 and December 7, 1941.

The original list of 31 now includes 65 names and counting. Only two are still living.

John A. Greco of Scranton was at Courthouse Square to see the plaque's dedication. Another living member of the club watched a live stream from his home in Florida.

Most of these men and women only live now in memories.

Susan Waituladich was here to remember her Uncle John Shumbres who was at Pearl Harbor at the time of the attack and later bunked with Joe DiMaggio.

"He would be so happy and proud," Waituladich said. "I was a little girl, but I do remember him talking about Joe DiMaggio and thinking, 'He's lying. That can't be true,' but he was bunk mates with Joe DiMaggio for a year and a half. They were in the service together."

Of the long list of names, only one died in the attack on Pearl Harbor -- Walter Paciga of Simpson.

"The Post 4712 is named after my Uncle Walter, and I never really understood what it all meant until today when I came here," said Karie Rupp of Simpson. "I didn't realize my Uncle Walter was the only casualty of Pearl Harbor from Lackawanna County."

When Walter's nieces saw his name up close for the first time, they hugged each other and cried.

"It's like he's real all of a sudden. We can touch him," said Kathryn Webber of Richmondale.

Lackawanna County officials say they expect the new plaque to be put up sometime next year. They are still compiling names of eligible veterans but did set a deadline. They will order the new plaque January 31.