NEWTON TOWNSHIP, Pa. — A tornado hit Newton Township and a microburst storm did damage in Madison Township on Tuesday, according to the National Weather S... 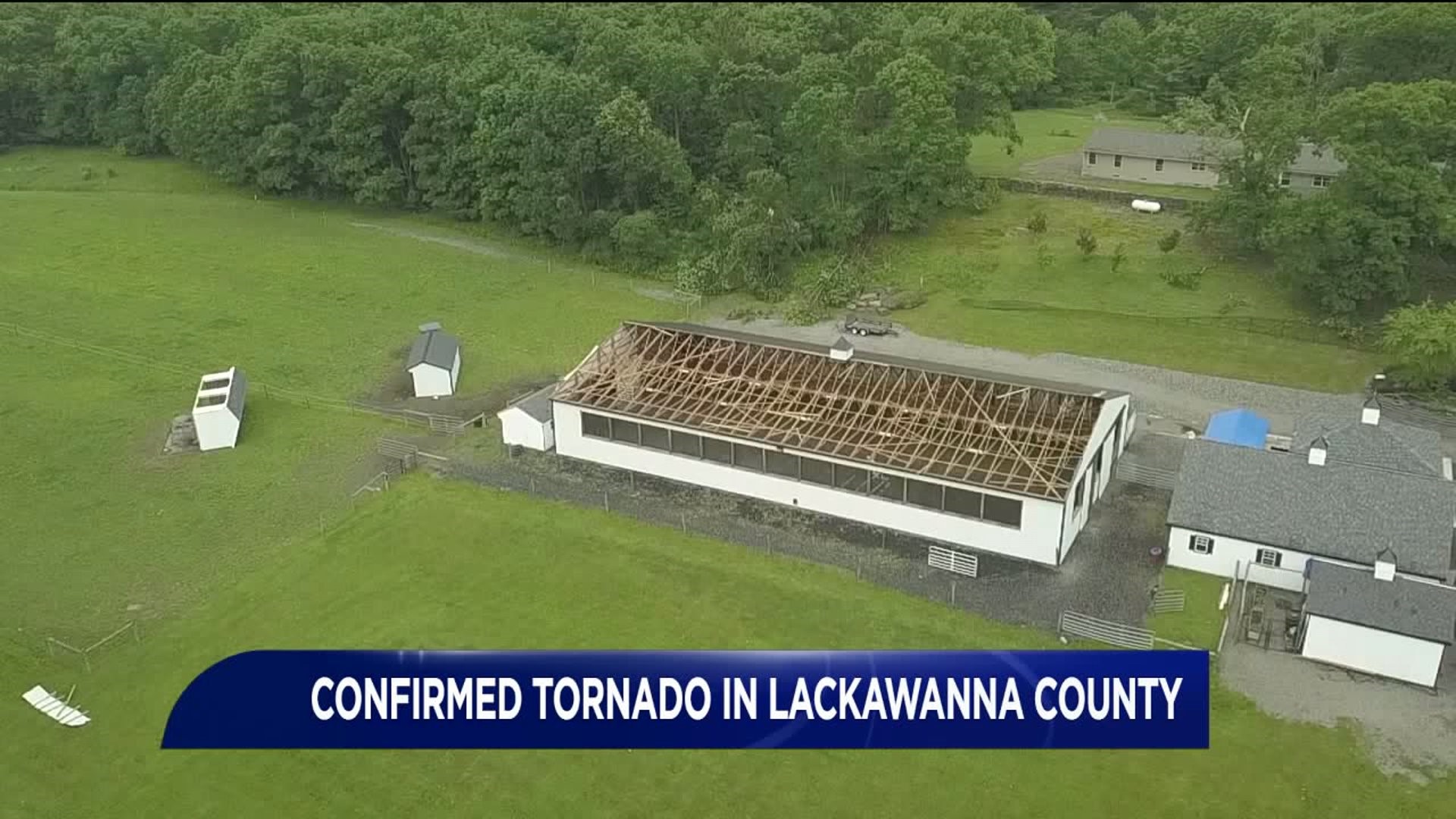 NEWTON TOWNSHIP, Pa. -- A tornado hit Newton Township and a microburst storm did damage in Madison Township on Tuesday, according to the National Weather Service.

Skycam 16 over Newton Township shows the damage of one of the harder-hit areas in Lackawanna County. There are downed trees and wires all over, the roof ripped off a barn, and structural damage to the Countryside Community Church.

"It was pretty dark, so by the lights of our cell phone, we were able to see some of the damage and it was just trying to process it really," said Pastor Mark Terwilliger.

When the sun came up, this was the first stop for this crew of meteorologists with the National Weather Service out of Binghamton. They are the ones who determine whether the damage here was from a tornado or straight-line winds.

"With the tornado damage, we're looking for a lot of indicators including if we see a path between a starting and an ending point, if we can determine that. Also, we're looking to see what type of damage. Is it elevated? Is it off the surface? Are the trees pointing in the same director? Or are they more convergent? Trees will be more in the convergent direction when we're looking at a tornado," explained National Weather Service meteorologist Mitchell Gaines.

After surveying the damage, meteorologists with the National Weather Service confirmed it was an EF-1 tornado with 90 mile-per-hour wind speeds that hit this part of Lackawanna County. 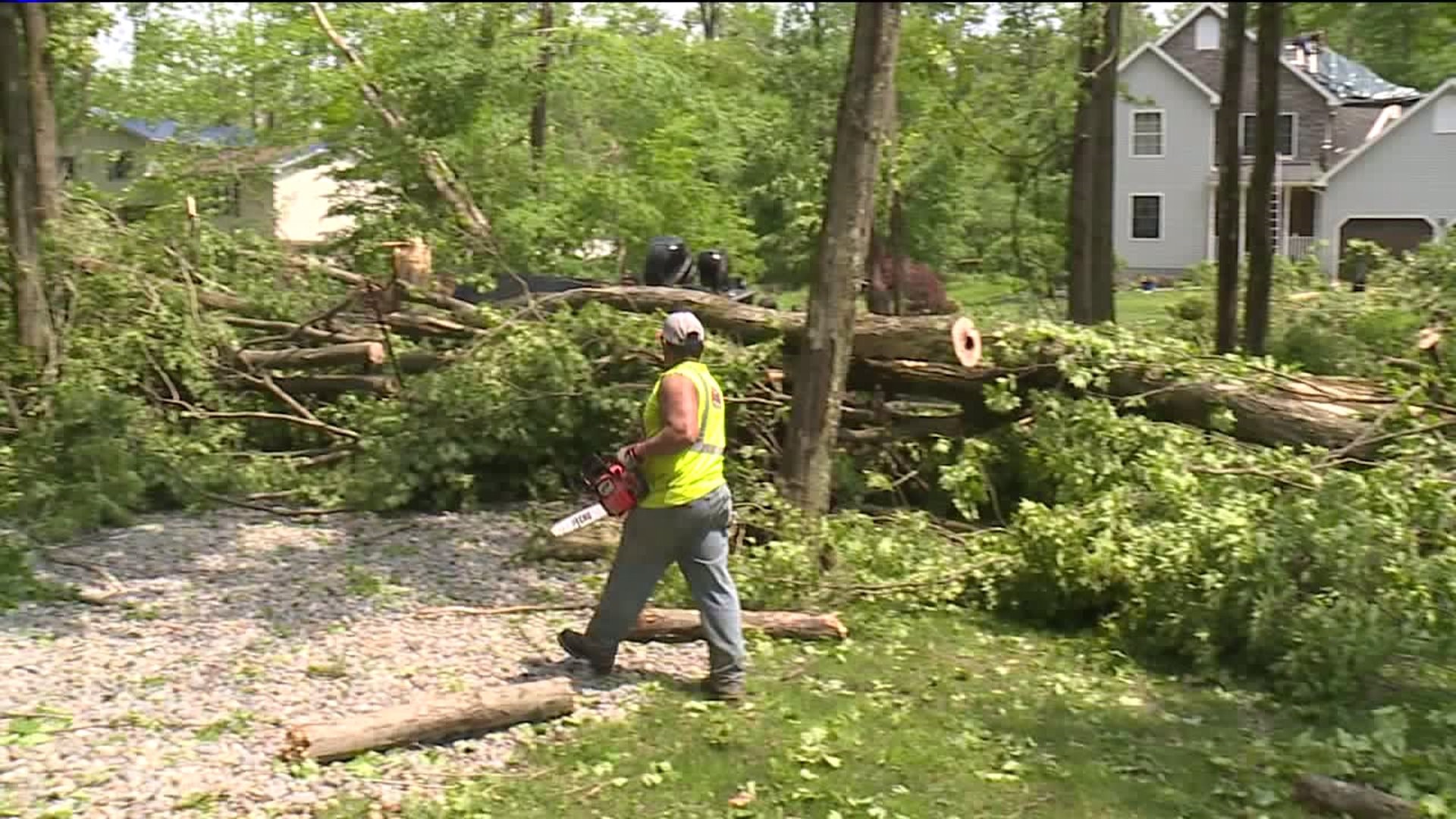 Meteorologists with the National Weather Service were also in Madison Township in Lackawanna County to look at the downed trees, the damage to roofs of homes, and the destroyed vehicles.

The damage in Madison Twp Lackawanna County is from a microburst, not a tornado according to @NWSBinghamton

"I think they're going to have to take down the second story of our house. It's not livable. We're just sort of waiting and patching up as much as we can," said Colleen Nelson.

Meteorologists were focused on a private residential community called Lake Kahagon in the North Pocono area of Lackawanna County.

"It seems like we got the brunt of it. Luckily, no one was hurt. Had it been an hour earlier when people were coming home from work, I think it would have been a lot worse," Nelson said.

Madison Township was under a tornado warning at the time the storm came through. People who live there say they've never been so scared.

"It happened just so quick. All of a sudden the blinds in my living room started blowing like crazy, I was walking towards the window to close it and the glass smashed in," said Linda Nelson.

"Our backdoor blew open and my husband started to yell to get down to the basement and it was over within 20 seconds and when we came out it was just total devastation," Coleen recalled.

Meteorologists confirm the damage wasn't from a tornado but from 75-mile-per-hour straight line microburst winds. They say the damage from a microburst could sometimes be even greater than a tornado.

"With microbursts, the damage can be of a wider path and quite a bit more instead of tornadoes which have a narrow path. Microbursts can have a wide path of damage and hit more areas," said Gaines.