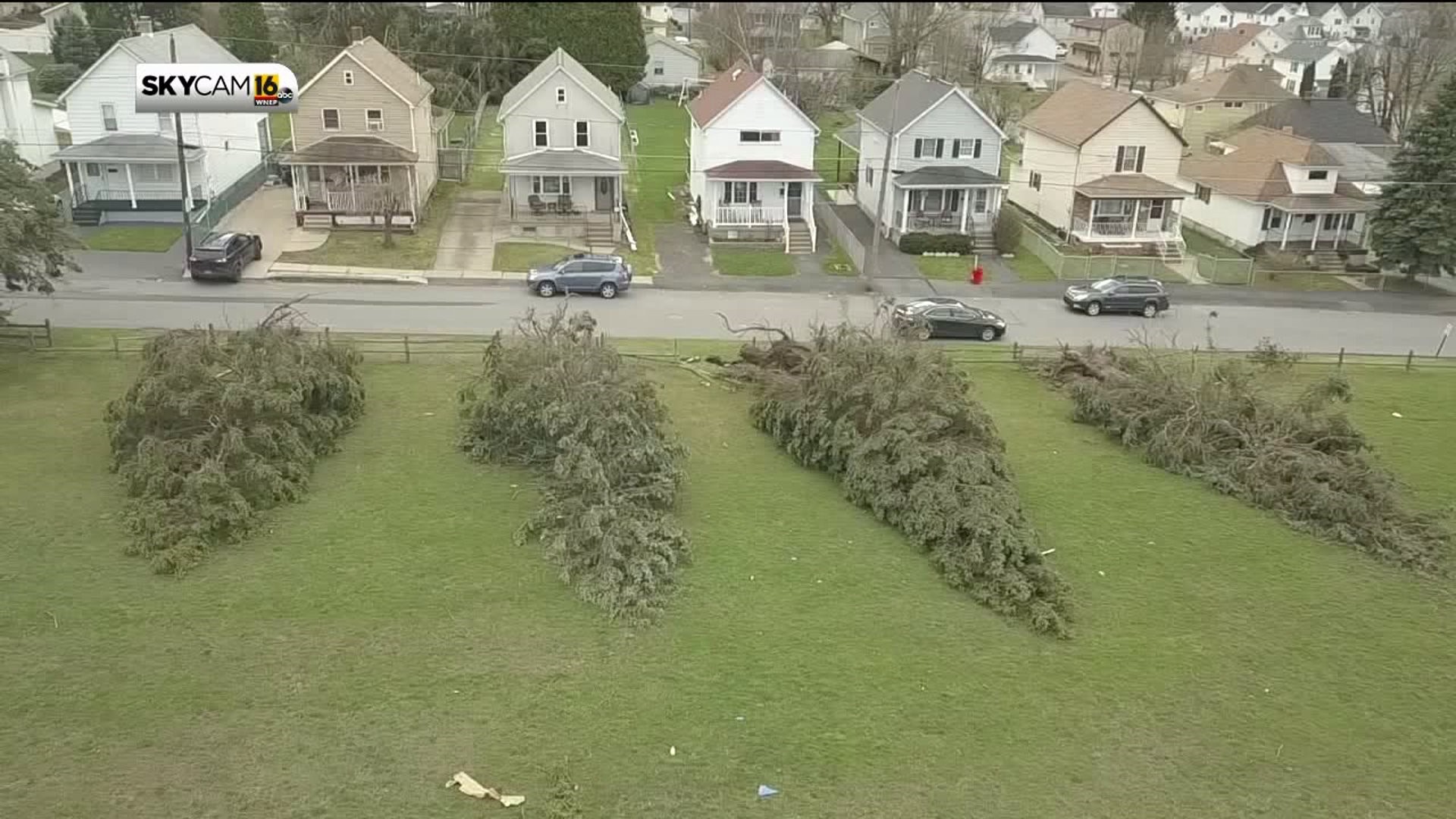 Meteorologists from the National Weather Service cataloged damage in Dunmore and in Scranton's Hill section and south side on Tuesday morning.

.@NWSBinghamton says it was in fact a tornado that hit Scranton & Dunmore. @WNEP pic.twitter.com/y7IZkLKCji

Newswatch 16 caught up with the meteorologists on Harrison Avenue in the Hill section. The team was taking pictures of the damage to help them determine how fast the winds were Sunday night into Monday morning. They were also trying to determine what direction the wind was blowing.

Investigators believe it was an EF-0 tornado with winds up to 85 mph that hit parts of Scranton and Dunmore.

About a dozen trees down at Sherwood Park in Dunmore. @WNEP @WNEPWeather pic.twitter.com/qtEYwuTIba

People in Scranton's Hill section say the storm that hit them early Monday morning is one like they've never experienced before.

"Once it slowed down, I came outside, seen all the trees down, chimney, chimney fell down. It's like a tornado or something, strong, strong winds. It wasn't no regular thunderstorm. I'll tell you that," said Kendall Murphy.

The cleanup they'll be doing this week is something they say they'll never forget.

"We live in the mountains. We're not in Kansas, so why are we getting all the tornadoes? They say climate change? I'm not a meteorologist, but I guess that's where it's coming from," said James Praefke of Praefke Construction.

A team of meteorologists was in the Hill section cataloging all the damage there using fallen trees and branches to tell them which direction the winds were going. They followed a path more than two miles long through one of the most densely populated areas in Lackawanna County.

"I'm here with a team, and one of our forecasters is actually putting all the data in the computer, and I really don't know at this point. This is a tough one because it's right in the middle of town," said NWS meteorologist Dave Nicosia.

The National Weather Service had a much better idea of what kind of storm they were dealing with when they got to Sherwood Park in Dunmore. With all of the trees down, they were able to confirm that it was an EF-0 tornado that hit parts of Scranton and Dunmore.

The National Weather Service says the tornado had gusts going 85 miles an hour with its path likely ending at Sherwood Park.

This storm feels unprecedented to folks in Scranton and Dunmore, but the National Weather Service says it's not that unusual.

"We've been getting tornadoes for many years. I don't think there's any marked increase, to be honest. We get tornadoes. I think people are just more aware of them, and especially with social media now, we're documenting more tornadoes and more storms in general," said Nicosia.

Praefke has been hard at work since the storm hit Scranton early Monday. He had no doubt about what to call that storm -- it was a tornado.

"I think so. I definitely think so. Like I said, I was on this house, it stuck shingles from one side of the house to the other side, into the other shingles. Pictures of it, I've never seen anything like that. I've seen debris stick on roofs, never a shingle come off a roof and go, you know, 150 yards, and stick into another roof," said Praefke.

Skycam 16 shows the storm's path was more than three miles long through Scranton and into Dunmore.

"We look at what we call 'damage indicators' like trees down like behind us, there's shingles, structural damage that we look at. We can attach a wind speed to that based on some science, some studies," Nicosia explained.

Some of the most significant damage was at Sherwood Park in Dunmore. The winds ripped trees from the ground and even toppled over a storage trailer for the Dunmore Softball League. It was there that the National Weather Service determined that it was an EF-0 tornado.

"I remember when all these trees were planted, they all came from Arbor Day, from Jefferson School up here on Pine Street," said Ranella.

Ranella lost two of those Arbor Day trees, and it could be a few days until his family can get back inside the house.

"They have to pull a crane in here to get these trees. They can't cut them. They have to pick them up and move them. They're too dangerous to cut because if they cut it, the tree is going to collapse on the house and do more damage."