GREENFIELD TOWNSHIP, Pa. — It’s a 75-year-old story that is fading with time. Harry Newak, a member of the Merchant Marines, was 21 years old when A... 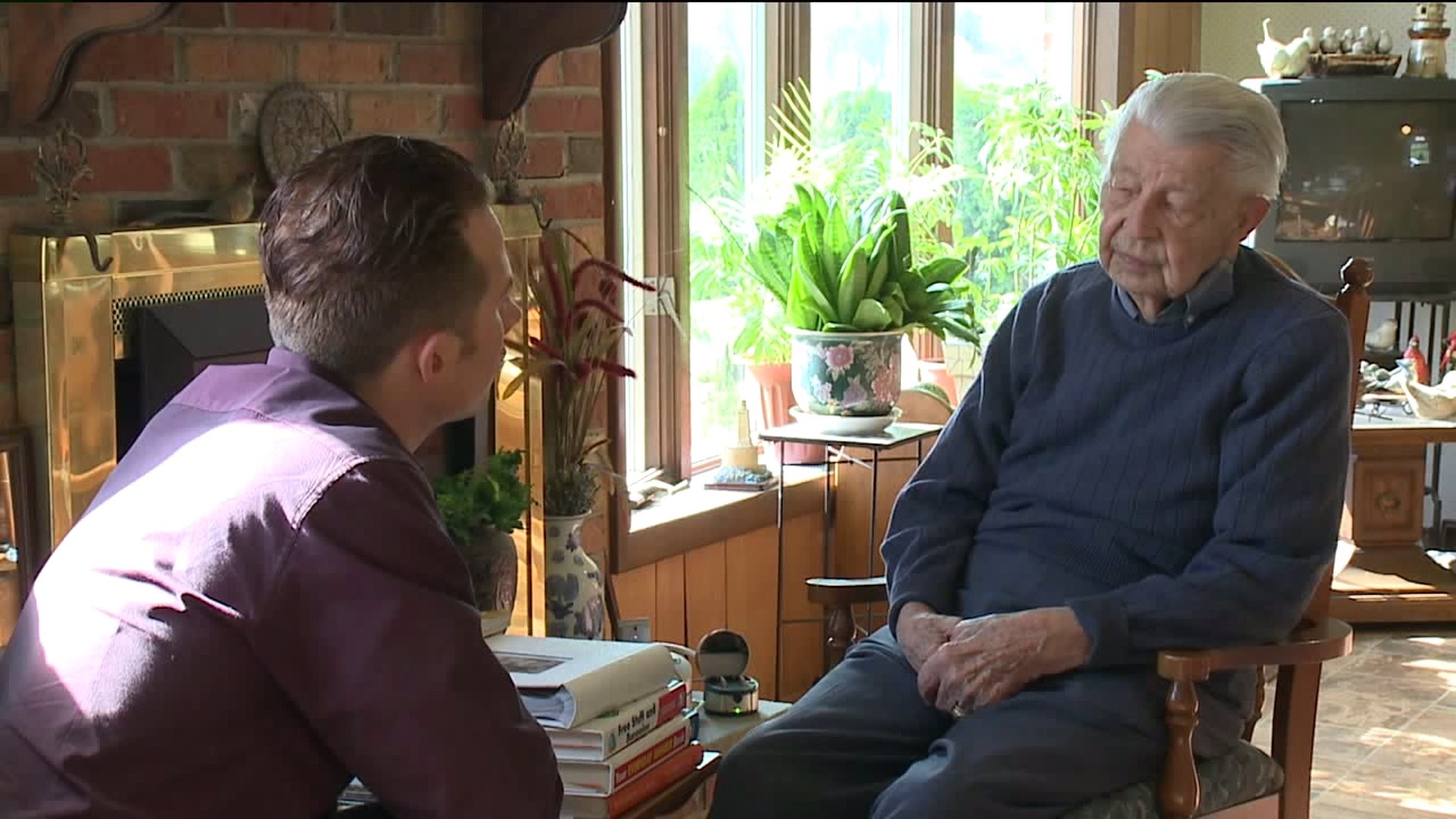 GREENFIELD TOWNSHIP, Pa. -- It's a 75-year-old story that is fading with time.

Harry Newak, a member of the Merchant Marines, was 21 years old when America and its allies started to change the tide against Nazi Germany in the 1940s.

Harry served as a Junior Third Mate on a liberty ship which carried cargo.

"This was quite an invasion," he said. "Can you imagine being in a convoy with 100 ships?"

The 97 year old took us back at his home just outside of Forest City, remembering the massive allied invasion which later became known as D-Day.

"Invading a country, my God!"

"We were instructed to put up what they called barrage balloons so when the Germans were coming in to stop us from invading France."

Those balloons kept German fighter planes away. When the invasion did start off the coastline of France on June 6, 1944, many soldiers never made it to shore after being weighed down by too much gear.

"They tried to make the invasion. I think we pulled out, these guys weren't ready to go into the water," he said. "They weren't ready to do what they were doing. Invading a country, my God!"

"They drowned, they weren't ready for the battle itself," he added.

Harry's ship was initially used to supply troops with food and other necessities, but as it got closer to shore, it soon became a floating morgue.

"I think we had like 45 or 50 soldiers who never got ashore, and we put them on the deck of the ship, waiting for them to be taken ashore to be identified and buried somewhere," Harry recalled.

"They have their dog tags which identified them, and they said, 'we will notify the families where they are buried.'"

Peggy Newak helps recount her husband's memories of that awful day all these years later. The couple have been married for 66 years.

"He told me it was the most awful thing he ever saw," Peggy Newak said. "As people grow older they feel more freer to do what they want."

"I don't think there's a secret. If there was I'd sell it," Peggy added with a laugh.

After World War II, Harry continued his career as a Merchant Marine. He's been around the world more than 10 times. commanding nearly two dozen ships, at one point one of the youngest shipmasters.

After returning to the states, Harry and Peggy lived in New Jersey until the mid-1980s. The couple then moved near their hometown of Forest City, into a place where Harry felt most at ease, a house on the water at Newton Lake.

It's there where two more generations of family grew. The Newaks have three children, 16 grandchildren, and 34 great-grandchildren.

Harry's daughter Michele Biondo thinks of her dad and other World War II veterans as silent heroes. Michelle says her dad rarely talked about D-Day until she was in high school.

"They're braver than we can ever imagine because they protected the civilians also from the horror of it. With the post-traumatic stress disorder thing that's happening now, I'm sure they experienced that, but somehow they had amazing strength, I think, in that different era," Biondo said. It's really special for young people to remember that that's how we get to be in this sweet land of liberty because of them and their sacrifice."

"'God bless America! And he does," Harry added.