SCRANTON, Pa. — A community in Wayne County is coming together to support a sophomore at Wallenpaupack High School. Peyton McGrath is getting ready to rec... 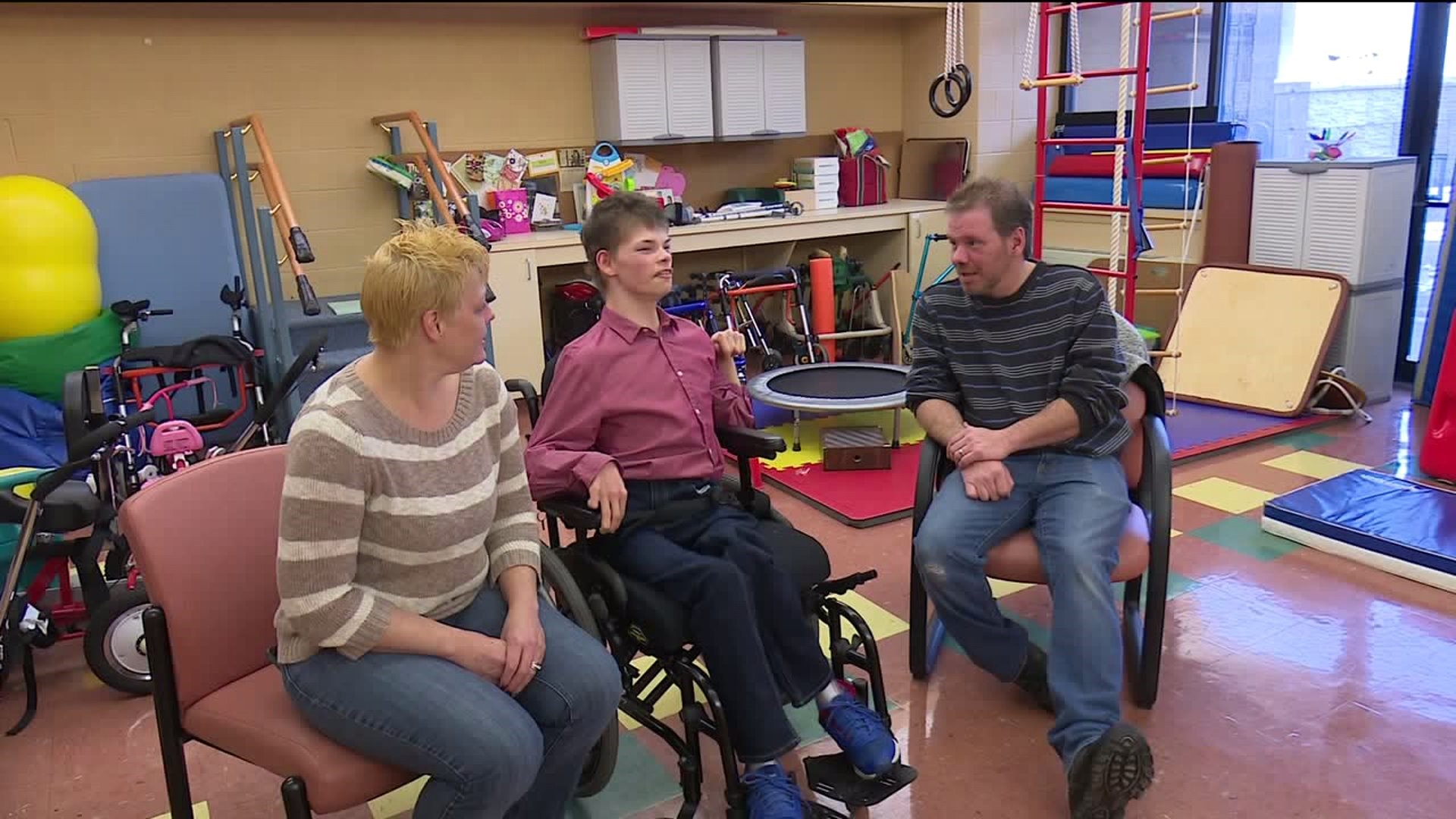 SCRANTON, Pa. -- A community in Wayne County is coming together to support a sophomore at Wallenpaupack High School.

Peyton McGrath is getting ready to receive the eighth surgery of his life, but there's something else he needs that no doctor can give him.

Most 15 year olds are anxiously anticipating getting their driver's license. They can't wait to go wherever they want, whenever they want.

Peyton is craving that same type of independence and mobility, but to get it, he needs a handicap accessible van. That's where a fundraiser called "Wheels for Peyton" comes in.

Peyton is your typical 15-year-old boy. He loves comic books, video games, wrestling, and his golden lab. Although he may have more of an affinity for 1980s culture than other kids his age, that's one of the unique characteristics that makes Peyton who he is.

That's what he wants people to see, not his disability.

"People think that they automatically have to feel sorry for me and that I'm somehow different even though I'm just simply in a wheelchair," Peyton said.

Peyton has quadriplegic spastic cerebral palsy, meaning his motor functions are impaired, but his cognitive functions are intact. More than just intact, actually. Peyton is above average when it comes to intelligence and wit.

"I look at some of these kids with severe autism and Down syndrome, and I realize how fortunate I really am to just be physically impaired," he said.

"He is in so much pain right now, that most adults would be like in the corner crying, and the child went to school and made the honor roll in the first quarter," said his mother, Natasha Doty.

In August, Peyton's health insurance allowed him to get a powerchair.

"It was just life-changing. It was just something that I thought I would never have," said Peyton.

But he can't get the full benefit of the new chair without a handicap-accessible van.

“Right now, his wheelchair is sitting in our garage, because we just have no way to transport it. So he’s with the manual chair which you know, he got used to the power chair, and it’s really changed his life. So, it’s sad to see him back in the manual chair," said Peyton's stepfather, Jon Doty.

The family car recently broke down, and they had to rent a van to go to the Children's Hospital of Philadelphia, where they learned that a much-needed hip replacement surgery wasn't possible - the bones in Peyton's legs are too damaged.

It was standing on a street corner in Philadelphia when Peyton's stepfather realized something had to be done.

"That was the moment, I think we all have that pride inside like I had always thought about doing a GoFundMe for him. It was like that pride that stops you to do it, and that died that day on the corner in Philly," said Jon.

"We needed money that we could never get in my lifetime," Peyton said.

"It was a hard choice for me, but he's getting bigger, and I don't know how much longer I'm going to be able to lift him from the chair to the car," Natasha added.

An ADA van dealer recommended they set up a GoFundMe page. In just over two weeks, over $4,000 has been donated.

Peyton's mother says the outpouring of support in such a short amount of time has been surreal. Peyton's stepfather says no two people deserve it more than Natasha and Peyton.

"It was made for her to feel a little peace of mind with the financial burden and for him to have that amazing freedom to go do what everybody else does because that's all he wants," Jon said.

If the fundraiser exceeds its goal, any additional money raised will be donated to St. Joe's in Scranton and the Children's Hospital of Philadelphia -- places that have helped take care of Peyton.