40 years ago, solidarity and celebration played out in Northeastern Pennsylvania as two of our own came home from Iran. 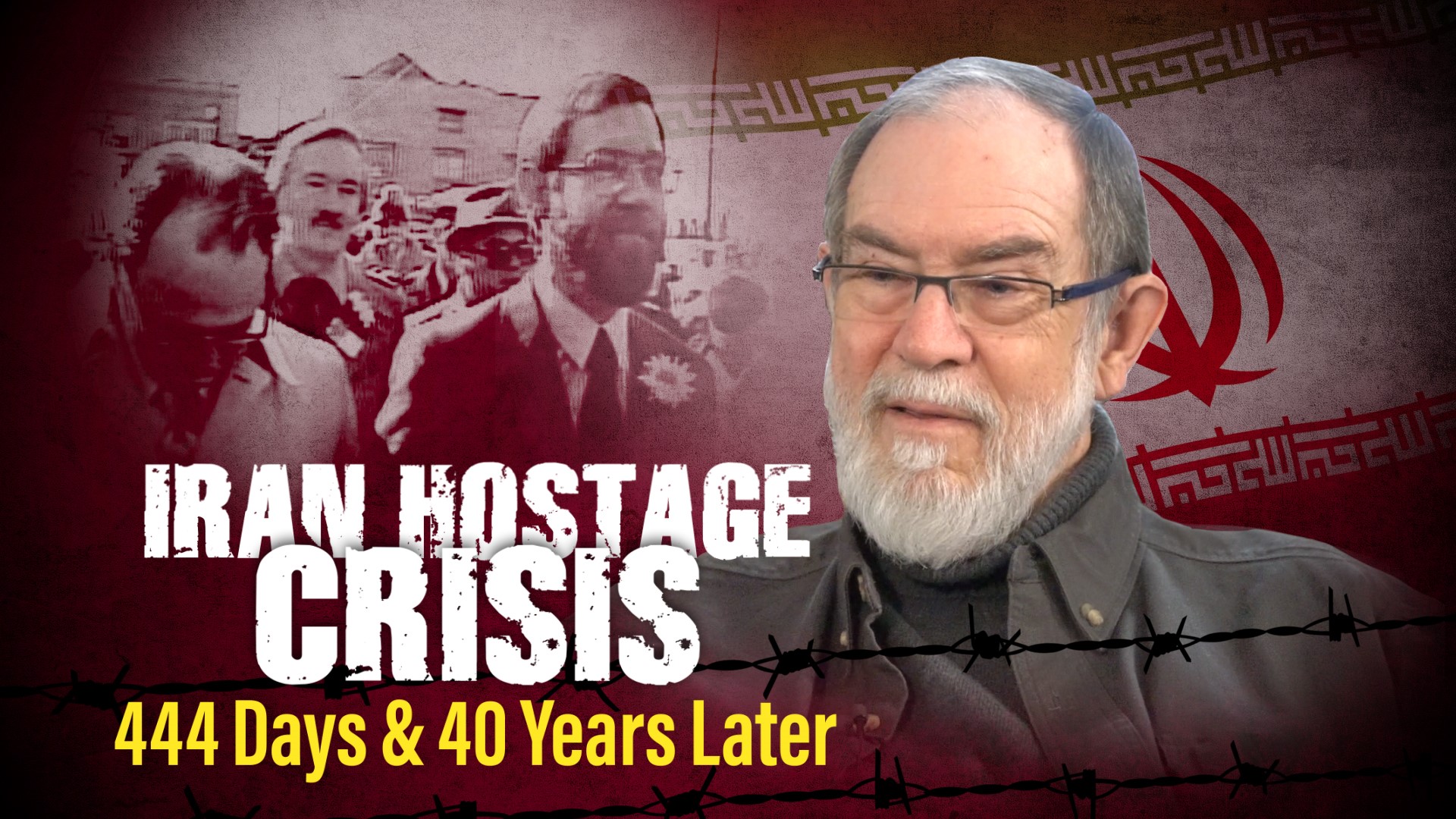 PENNSYLVANIA, USA — On January 28, 1981, one of our area’s biggest signs of solidarity and celebration played out in Northeastern Pennsylvania.

It was 40 years ago when we celebrated the end of the Iran hostage crisis and the return of two of our own.

Bruce grew up in Edwardsville. Michael was a native of Olyphant. Bruce died about a year ago. But tonight, 40 years after his release from captivity, Michael Metrinko takes us back to the scene in Olyphant, a time when his hometown gathered to celebrate his return after he lived through a nightmare that lasted for 444 days in Iranian prisons.

Michael’s release and welcome home celebration brought out thousands. Students had the day off from school. Many people left work early. A nation’s prayers were answered. 52 American hostages were set free.

Now, this self-described “private man” Michael Metrinko, who rarely speaks to reporters about his time in captivity, invited Newswatch 16’s Ryan Leckey to his Pennsylvania home. It’s here where he opened up about that frightful, life-changing day when Iranians stormed the US Embassy and took him and 51 others hostage.

It’s a very dramatic story, and we want to let you know, it also includes some strong language.

PODCAST FANS: In a special podcast interview with Michael Metrinko, he shares more stories about growing up in PA to his work in the Middle East. Plus, hear why the US Embassy takeover in Iran wasn’t the first time he was taken captive. Find the player at the bottom of this story.

The world almost never got to know Michael Metrinko of Olyphant as one of the 52 people captured during the Iran Hostage Crisis.

That’s because Michael was not supposed to be at the US Embassy in Tehran on that day in November of 1979 when 52 Americans were taken hostage by militarized Iranian college students.

On a  typical day back in the late 1970s, Michael was usually out on the streets of Tehran meeting people. Part of his job as a political officer meant really getting to know the locals and what was happening in the town. Today, we’d call this “networking.”

"You have to be out walking the streets, talking to people, meeting with people, going out, drinking with them, dining with them," recalled Metrinko, "Normally, I would be out all night or out until 2:00 or 3:00 or 4:00 in the morning."

Because of curfews, Michael would often end up sleeping at a friend’s house. During this time, he was in his 30s, working out of the US Embassy after hundreds of Americans had already fled the country.

Metrinko remembers that things were already getting very unpleasant there.

After all, the late 1970s was a time when many in Iran hated the United States because of America’s refusal to deport Iran’s ousted ruler, the Shah, who was in New York City to receive treatment for cancer.

Back in Iran, a revolution was gaining momentum under Ayatollah Khomeini. In November of 1979, emotions boiled over, and Michael, a typical night owl, got an unusual request.

"Well, friends of mine had called me, and they asked me if I could be at the embassy in the morning on November 4.  It's very important. I said, what about the afternoon? No, no, no. It has to be in the morning," said Metrinko.

"Michael, we have to see you. You know, around 9 o'clock or so, what they said was, we're going off to Lebanon," recalled Metrinko, "We have, you know, we're going to go and see Yasser Arafat. And we want to talk to you before we go to see him."

"Well, when someone tells you they're going off to meet the head of another major political movement in another country, and the people telling you this are also major political figures in the country where you are, you don't pass up the opportunity," said Metrinko.

So Michael went to the embassy on the morning of November 4, 1979, but those “friends” never showed up.

"That's when I knew that they had screwed me," Metrinko said, "People started to jump over walls, and suddenly the embassy property was filled with thousands and thousands of people."

"Lots of noise, and then there's an increased rumbling," recalled Metrinko, "We still weren't a huge embassy. There were maybe 65 Americans in it. If that."

Metrinko remembers hearing sounds of things crashing and then, "Marines saying everybody you know, 'Leave your offices, get away from the windows.' And we were being directed to what had been the ambassador's suite."

While Michael and the others tried to rush to safety, another group sprinted to the embassy’s communication room, where classified documents were kept.

The other group started to destroy things very quickly, according to Metrinko, but it was too late.

"It's amazing how long it takes paper to burn when you want to burn it," said Metrinko.

Metrinko and others surrendered the embassy officially and were taken to the ambassador's residence.

"Then the next day to a larger building where we were, you know, just all laying on the floor, still tied up," said Metrinko, "That was the last time I saw any American.”

Ryan Leckey: "While they're walking you from one building to another building, did you think they're going to kill me?"

"I was angry. Anger doesn't allow you to think about being killed. When you're angry, you're angry, and you don't care about consequences."

Ryan to Michael, "Were you part of the mock executions?"

"No, responded Metrinko, "I never even knew that happened until I read about it later."

Handcuffed and often blindfolded, Metrinko says he spent many days living in his own filth.

"I was in hardcore prisons on concrete floors with no windows and just little air holes. I was alone the whole time, too. So I was in solitary from November of 1979 until May, I think of 1980. The room that I was in for a long time was exactly the size of a single mattress, you know, a single mattress for a cot.”

Ryan Leckey: "I saw some reports. You drew shapes on the wall."

And he thought about escaping.

"If I'm going to get out of this, if I have to run someday to get out of here, I'd better be in very good physical shape," said Metrinko, "So I started, you know, a huge program of exercise."

Metrinko would run in place for hours a day, at one point getting up to 1,000 sit-ups a day.

"Even assuming that I could get out, I was in prison clothes, or I was in a pair of pants that were held together by a staple at this point,” recalled Metrinko.

Considering how much Michael was moved around while in captivity, he says he rarely saw or even knew the 51 other American hostages.

When asked if he thought he was going to die, Metrinko said, "You know, I didn't care. I just did it day by day."

At one point, Michael was brought before an Iranian leader whom he gave a piece of his mind to since he could speak the native language of Farsi.

"I was warned beforehand that if I said anything at all, that I'd be punished for it," said Metrinko, "And I was."

Often roughed up, bruised, and isolated, Michael and the 51 other hostages did what they could to survive, while then-President Jimmy Carter continued to try to negotiate their release. The US even attempted a covert rescue operation. The botched effort became another downfall in Carter’s administration after America’s own military aircraft collided with each other in an Iranian desert.

"They're taking us to the airport. A guard on the bus yelled out in Farsi, said, 'You American bastards.' And I simply responded in Farsi in a loud voice, I said, 'Shut up yourself, you son of an Iranian whore,' and he got offended. So he called me off the bus, and the guards beat me up again, and the bus left. At this point, I'm thinking, 'dumb move.'"

Lucky for Michael, another group of Iranians showed up and shoved him into a car.

Michael finally arrived back in Northeastern Pennsylvania, greeted by thousands of people as he made his way into his hometown in Lackawanna County.

Michael remembers what it felt like knowing the entire country was praying for his safe return.

"Heavy. Very heavy heart to its right. No, I can't recall the emotion of 40 years ago, but it was very emotional," recalled Metrinko.

Ryan Leckey: "I've heard some people say, sometimes you didn't want the attention when you came back to Olyphant? You weren’t happy for the parade?"

When asked if it was a shock, Metrinko explained, "Yeah, very much so. You can't change temperatures that quickly; things break. It was the constant attention. I'm a private person."

Metrinko denies claims that he was in the CIA.

"The CIA has its own people. I was in the Peace Corps, the Department of State. Now, have I worked with the CIA? Yes, at various times, because we're colleagues at the embassy."

At 74 years old, Michael spends his time volunteering, teaching immigrants conversational English in the Carlisle area. His life of foreign service is spelled out in art all over the walls of his home.

One is a sketch of Metrinko with the words, "Welcome home, Michael."

It’s why Michael continues to donate countless pieces of art from all over the Middle East to his alma mater.

"Scranton Prep had all those bare walls. And I figured, why not give the art to the school?"

The 1964 graduate hopes the art now at Prep, and even the American flag that flew over the White House upon his return inspires students to reach for more and learn from other cultures like he did, being raised in Olyphant.

Now Michael is living in isolation again, this time by a pandemic.

But as he looks to the future, he points out to us what he calls the good that came during his 444 days in captivity. It's something he almost relives each morning in his kitchen.

Now, 40 years after those infamous 444 days in captivity came to an end, Michael still has hope that things will continue to change for the better for all of us.