Mail-in votes received after November 3 currently are not counted in the state's election results, regardless of their postmark, state officials said. 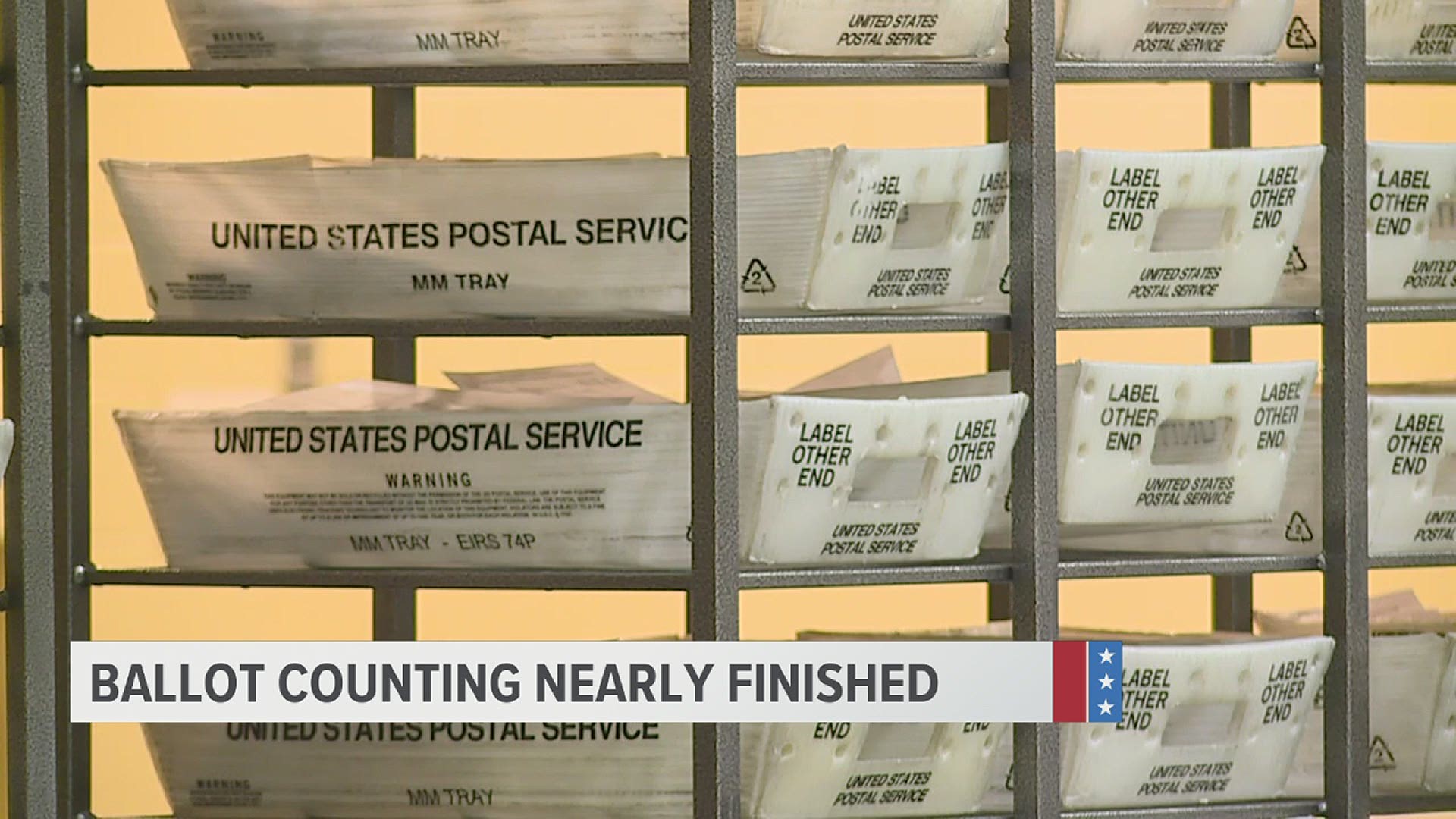 HARRISBURG, Pa. — President Trump's lead over Joe Biden narrows as election officials count hundreds of thousands of mail-in ballots 48 hours after polls closed. Any mail-in vote received after Election Day is segregated and not currently counted in the state's election results, regardless of whether they were postmarked on or before November 3.

"The numbers that have come in so far are a tiny fraction of what came in after the primary and usually, based on historical numbers, you get the most ballots the day after Election Day and then it dwindles from there. I don’t expect it to be a significant amount," said Pennsylvania Secretary of State Kathy Boockvar.

County officials have counted the overwhelming majority of mail-in ballots, with less than 10 percent of mail ballots remaining as of Thursday evening.

A legal fight is ongoing over Pennsylvania’s extended deadline to receive ballots in the mail by 5 p.m. Friday. The Pennsylvania Supreme Court has ordered a three-day extension for ballots postmarked on or before Election Day and for those with missing or illegible postmarks “unless a preponderance of the evidence demonstrates that it was mailed after Election Day.”

Less than 10% of mail-in ballots remain outstanding in PA. Ballots received after Election Day are not included in these election results, even if they had a postmark on or before Nov. 3 says @PAStateDept.

However, those mail votes received after November 3 are being segregated by counties and currently are not included in election results, regardless of their postmark.

On Wednesday, President Trump's campaign sought the U.S. Supreme Court’s permission to intervene in a pending appeal that asks the justices to pull back the extended deadline.

Right now, 87% of mail-in ballots have been counted in Pennsylvania. @PAStateDept Secretary Boockvar will give an election update at 5:15pm. @fox43 https://t.co/DI7DF1dWpG

The campaign also is calling for a temporary halt in the counting of ballots in Pennsylvania until it is given “meaningful” access to numerous locations where ballots are being counted and processed.

Despite criticism and a number of lawsuits filed over Pennsylvania's vote count, Secretary Boockvar defended the integrity of this unprecedented election in the Commonwealth.

"Partisan politics have no place in the Pennsylvania Department of State or any county elections office for that matter. We work for voting rights and for effective election administration and I can tell you that I will do everything in my power to make sure that every voter and every candidate and every party have access to a fair, free, safe and secure election," asserted Secretary Boockvar.

There have been no reports of fraud or ballot concerns out of Pennsylvania, according to the Department of State and it’s unclear how many mail-in ballots are still en route to county elections offices.

Pennsylvania has 9,152 polling places staffed by about 45,000 poll workers. Secretary Boockvar noted that the ballot count is never finished, much less official, on election night.

You can find more information on Pennsylvania election results on our Voter Access Team's 2020 Election Guide.