DC lifts curfew after riots at the Capitol, Public Emergency extended for 15 days

The curfew was lifted at 6 a.m. Thursday. Law enforcement surged into the District minutes later. 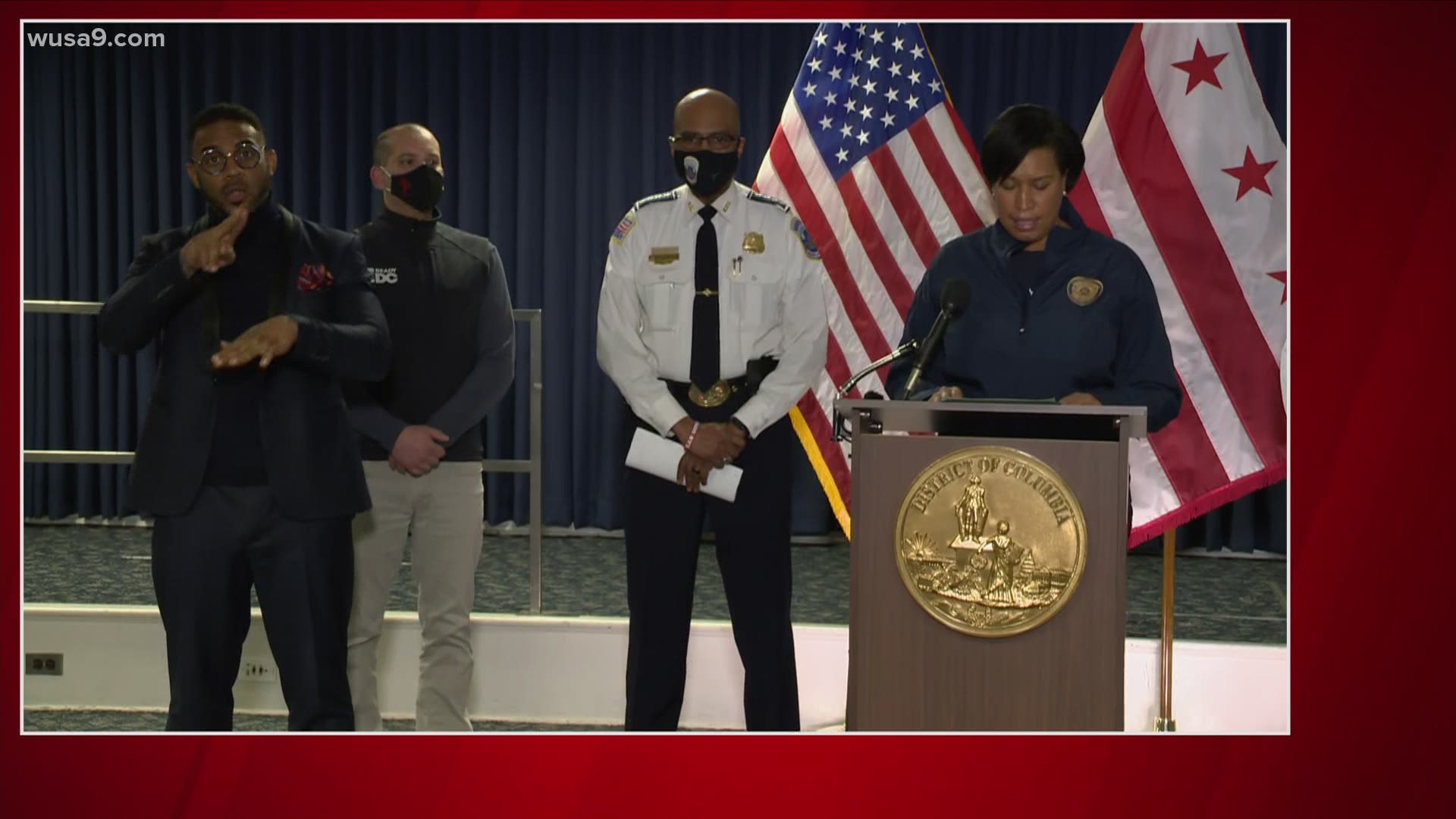 WASHINGTON — A curfew put into place by the mayor Wednesday night has been lifted Thursday morning.

DC's Mayor Muriel Bowser announced a curfew from 6 p.m. Wednesday to 6 a.m. Thursday for Washington amid violence and pro-Trump riots that caused U.S. Capitol Building to go under a lockdown.

"During the hours of the curfew, no person, other than persons designated by the Mayor, shall walk, bike, run, loiter, stand, or motor by car or other modes of transport upon any street, alley, park, or other public places within the District," said the order from Bowser's office.

Once the curfew was lifted Thursday, WUSA9 saw a line of law enforcement vehicles from Virginia State Police moving into the District following the events at the U.S. Capitol Wednesday. The early morning hours of Thursday were relatively quiet, with no reports of violence overnight. 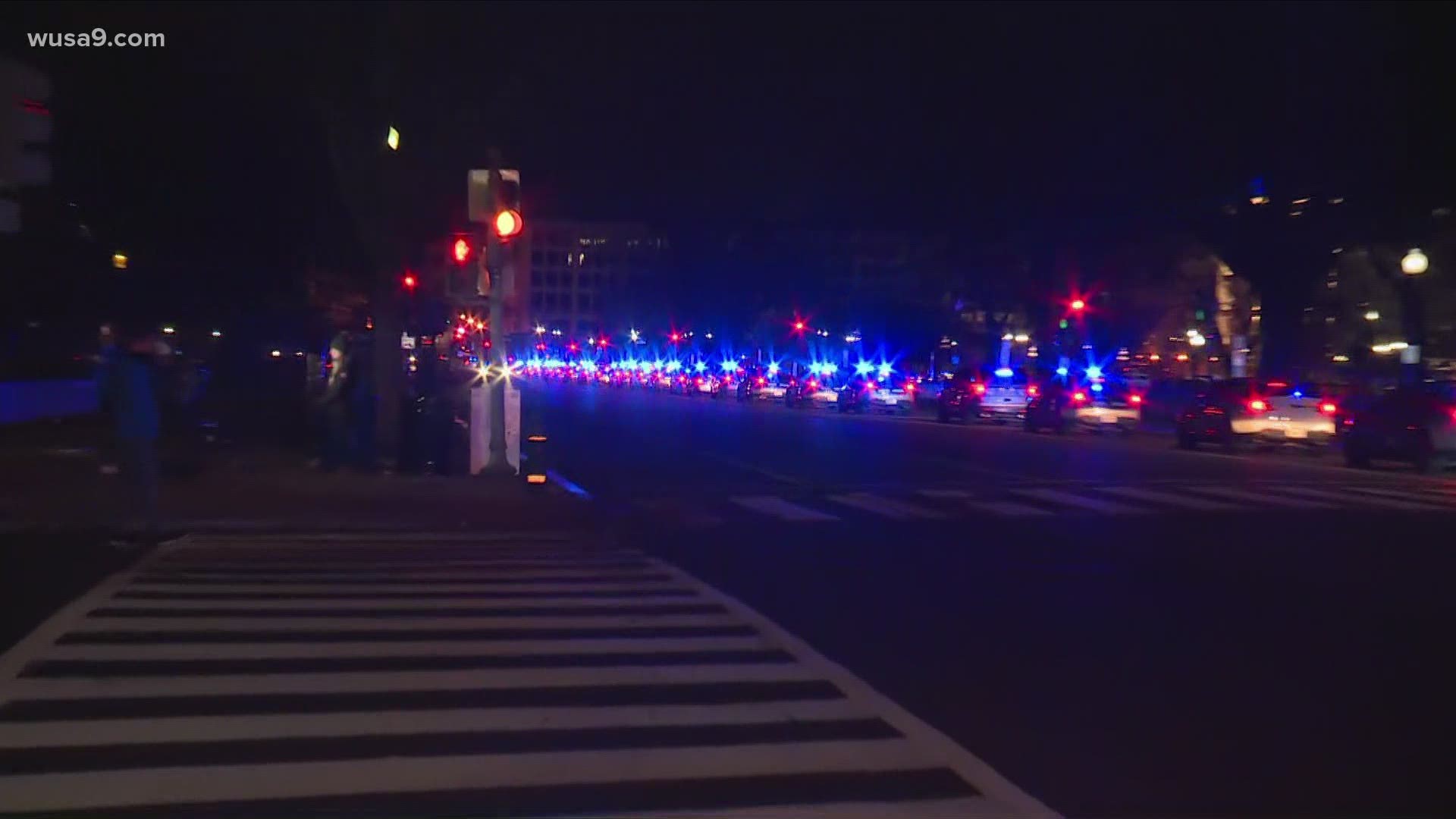 Bowser has been vocal about asking people to not travel to downtown D.C. amid protests that have been scheduled for weeks in D.C.

Four people are dead, 52 were arrested and 14 DC Police officers were injured amid pro-Trump riots and demonstrations near and at the U.S. Capitol Wednesday, according to initial information released by MPD. Those numbers are expected to rise.

Bowser also issued a Public Emergency for 15 days, allowing her to institute another curfew at any time, among other options to ensure any violence is quelled.

In a press conference late Wednesday, DC Police Chief Contee and Mayor Bowser were asked about the response by DC Police, and if the department met the duties it was assigned to do.

Today, I'm ordering a citywide curfew for the District of Columbia from 6:00 p.m. on Wednesday, January 6, until 6:00 a.m. on Thursday, January 7. pic.twitter.com/lp6Pt3DcYC

"As far as the Metropolitan Police Department's response (Wednesday) I'm very comfortable with that," said DC Police Chief Contee. "I think we'll all (law enforcement agencies and DC officials) look back to examine the different plans that were in place -- the coordination, what US Capitol Police plans were."

Contee said that multiple law enforcement agencies were in communication prior to Wednesday's chaos and that an agreement was made to respond to one another needs if help was necessary during protests and riots.

When asked about his department using restraint in making arrests in the Capitol breach, compared to more arrests announced during protests over the summer, Contee expressed that comparing the two is difficult because of the tasks at hand on Wednesday to help fellow law enforcement agencies at the US Capitol Building.

Contee added that arrests were made starting at the Capitol Building and moving into the streets in downtown DC.

Bowser also faced questions in regards to if she wished more federal officers and police would have been deployed to the city, even with the frustrations she had with similar agencies and departments that were in the city on June 1 that moved people out of Lafayette Square.

"Yes, I had some criticism about that (the June 1st incident) because people who were peaceful were moved out even prior to a curfew expiring for the purpose of a presidential photo-op," said Bowser. "I do think it bears mentioning that there is some difference in the federal response at Lafayette Square and at the United States Capitol. I think that we saw different types of vehicles used, we saw a different posture used (by officers) in some cases. Such as we did see the use (Wednesday at the Capitol Building) of that military personnel on the ground."

Bowser's comments about military personnel are in reference to a substantial number of National Guard troops that were deployed to guard monuments and buildings in and around the US Capitol -- a stark difference to the police presence at the start of Wednesday's violence at the Capitol.

DC Police will send out Be On the Look Out alerts (BOLO) will be sent out by DC Police for some of the people that breached the US Capitol Building, said Bowser at the end of her news conference.

Learn more from our coverage below: