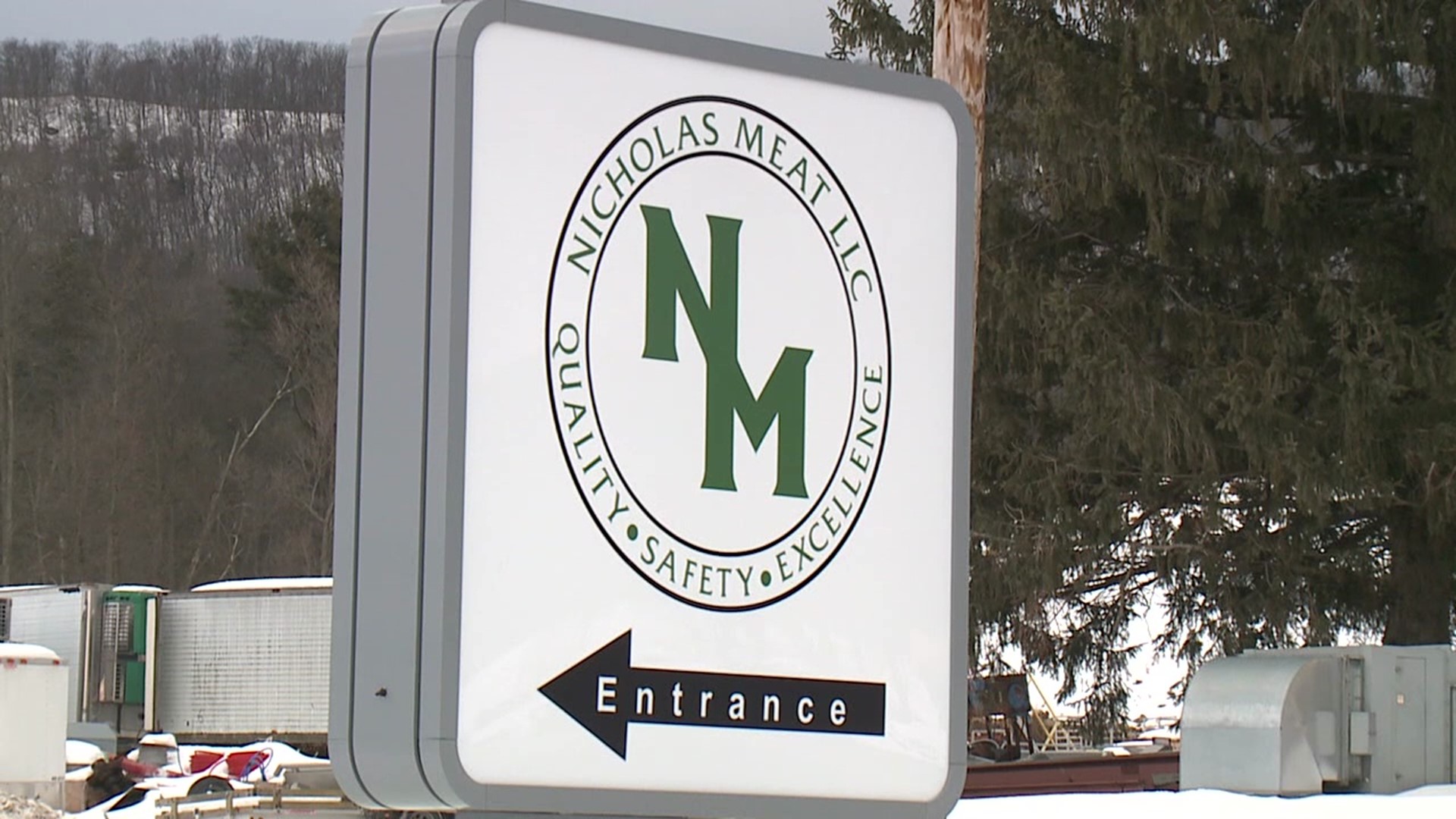 LOGANTON, Pa. — As employees at the Nicholas Meat packing plant left their jobs at the end of the day, they're also leaving the company for the foreseeable future.

Nicholas Meat says it's shuttering operation for the time being after it was found in violation of a State Department of Environmental Protection regulation by putting food processing waste on the snow-covered ground.

Brian Miller is the Director of Sustainability for Nicholas Meat.

"The DEP allowed us to do that for 10 years up until the day before in early February and then the very following day they issued a notice of violation,” said Miller.

Trish Leigey lives near the plant in Greene Township and agrees the company was allowed to put food processing waste on snow-covered grounds through what's known as winter application.

But it was complaints from the community about how much snow was on the ground that got DEP's attention.

"The issue is here that we have had a harsh winter and because of the amount of snow that is on the ground, we really don't know what's happening under that ground,” said Leigey.

As for Nicholas Meat, it's not known how long the operations will be halted.

The company says it’s a matter of getting the violation resolved with DEP.

Elliott Keller is the plant manager and says the company will support the staff while the plant is closed.

"Right now we've got 350 employees that we are currently paying them for the short term, hopefully, this gets resolved quickly so everybody can back to work,” said Keller.

“DEP has not ordered the Nicholas Meat operation to shut down. In response to numerous community complaints, DEP has taken enforcement action within its authority to ensure that the Commonwealth’s environmental regulations are followed in order to protect the environment and public health. In this instance, the Department’s action is driven by the increased potential for runoff due to the uncertain field conditions underneath the snow and the potential for increased runoff primarily due to melt. These concerns drove the February 9, 2021 order to immediately cease land application of food processing residual (FPR) to snow-covered fields. Nicholas Meat recently appealed DEP’s order to the Environmental Hearing Board, and the company also asked to be relieved of the order’s obligations until a thorough hearing can be held on the matter. Up to this point, the Environmental Hearing Board has twice denied that request, and has ruled that the DEP’s order is now in effect.

Nicholas Meat has always had multiple legal options available to manage its food processing residual, which are described in part within the Food Processing Residual Management Manual attached. The choice to shut down facility operations is solely theirs.
The Nicholas Meat facility has expanded greatly, from processing 150-200 cattle and generating 40,000 gallons of residual waste daily in 2013 to approximately 600 or more cattle today and generating 150,000 gallons of residual waste today. During this time, the storage for the residual waste the process generates has not expanded at all. That growth, coupled with an unusually long standing snowpack and no backup plan, is the genesis of this issue. DEP recently issued permits to Nicholas Meat for the construction of a waste digester, which is hoped to provide a long-term, sustainable solution.

To address winter spreading of food processing residual in more detail, attached are DEP’s Food Processing Residual Management Manual and a Word document with information from this manual and the manure management manual.”