SCRANTON, Pa. — One day after Pope Francis defrocked former Cardinal Theodore McCarrick, Catholics in our area are responding to the historic decision ami... 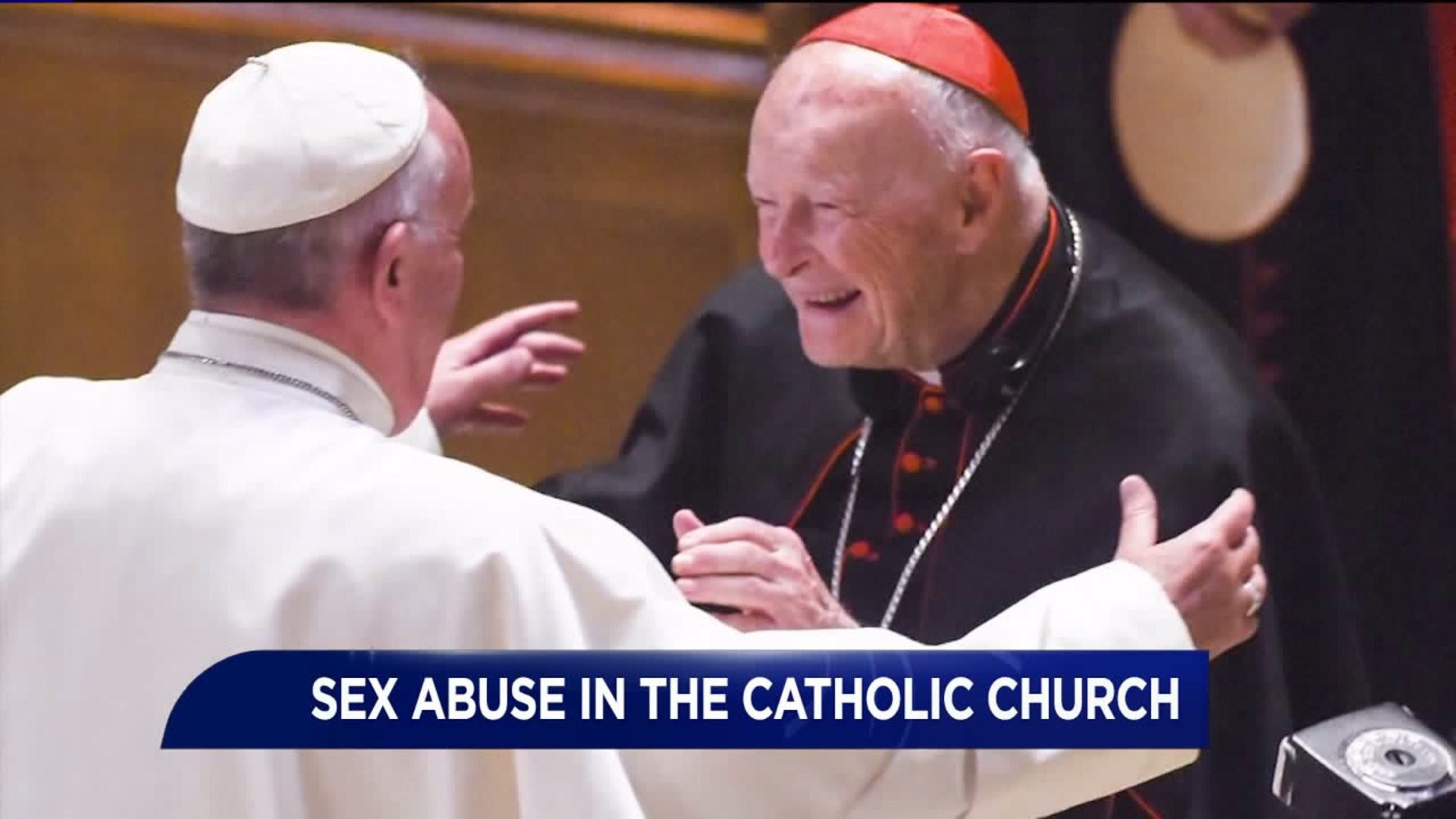 SCRANTON, Pa. -- One day after Pope Francis defrocked former Cardinal Theodore McCarrick, Catholics in our area are responding to the historic decision amid the church's sex abuse crisis.

The Vatican announced its decision to defrock Theodore McCarrick as Pope Francis prepares to meet with church leaders this week to discuss the sexual abuse crisis.

McCarrick, a former cardinal and archbishop of Washington, had been accused of sexual abuse involving seminarians and at least one child. A church trial found him guilty of sexually abusing minors.

The abuse scandal hits close to home for people in our area after the names of multiple priests were released in a report by the attorney general last year.

Some believe the Vatican's actions are a step in the right direction but too little too late.

"They are taking them late. They should have taken them sooner. There are too many young people that are leaving the church. They are going to these churches of non-denomination, and it's a shame because I have family members who have left the church because of what is going on," said Phyllis Bohenek of Scranton.

The Pope's decision to remove McCarrick from the priesthood is the first time such a punishment has been handed down on such a high ranking member of the Roman Catholic Church.

Leaders of the Catholic church in the U.S. and here in our area stand by the pope's decision.

The judgment was recognized by the Pope to be of a "definitive nature," a Vatican statement said, and is "res iudicata" -- meaning it is no longer subject to appeal. McCarrick was informed of the decision Friday.

Since 2015, Pope Francis has accepted the resignations of at least five American bishops after allegations they mishandled clergy abuse cases or were themselves accused of misconduct. McCarrick, the sixth to be disciplined, was by far the most notorious and is the only one to be laicized, or defrocked.

The punishment means that McCarrick, who is 88 and lives in a friary in Kansas, can no longer present himself as a priest or celebrate the sacraments. Pope Francis ordered the former cardinal to live a cloistered life of "prayer and penance" last summer. Since the church is no longer required to provide for his welfare, it is unclear how the aging and disgraced former churchman will support himself.

The Vatican's announcement about McCarrick comes at a crucial moment for the church as more than 100 bishops from around the world convened by Francis plan to meet Thursday through February 24 in Rome to seek solutions to the damaging clergy abuse crisis.

The announcement also follows news of a salacious new book that calls the Vatican "one of the biggest gay communities in the world."

In the United States, pressure had been building since last summer for the Vatican to take action on McCarrick, with several bishops saying that people in their diocese were outraged to hear of his actions, and sometimes even more angry he had apparently escaped discipline and had even risen through the church's ranks despite persistent rumors about his misconduct.

"The Holy See's announcement regarding Theodore McCarrick is a clear signal that abuse will not be tolerated," said Cardinal Daniel DiNardo, president of the US Conference of Catholic Bishops. "No bishop, no matter how influential, is above the law of the Church."

The Archdiocese of Washington said that the Vatican's laicization of McCarrick "underscores the gravity of his actions."

"Our hope and prayer is that this decision serves to help the healing process for survivors of abuse, as well as those who have experienced disappointment or disillusionment because of what former Archbishop McCarrick has done."

Allegations that McCarrick had sexually abused seminarians and an altar boy decades ago have prompted serious questions among church leaders and observers as to why he was allowed to rise through the institution's ranks.

A letter from a top Vatican official obtained by CNN last year appeared to acknowledge that the Holy See knew about the allegations for at least several months before McCarrick was elevated to cardinal in 2001.

He subsequently led the Archdiocese of Washington until 2006, frequently meeting political leaders and becoming a force in American politics.

Pope Francis ultimately ordered a Vatican investigation into the accusations in 2017, and McCarrick resigned from the College of Cardinals last year after the accusations were made public. He has previously denied the allegations, saying he has "absolutely no recollection of this reported abuse."

Patrick Noaker, the attorney for the former altar boy who made the accusation against McCarrick, said in June that his client was molested twice by McCarrick, once in 1971 and again the following year.

Both alleged incidents, Noaker said, occurred at St. Patrick's Cathedral as his client was being fitted for a cassock for Christmas Mass.

"McCarrick started measuring him, then he unzipped his pants, stuck his hand in and grabbed his genitals," Noaker said. The lawyer said his client, who was about 16 at the time and a student at a Catholic high school in New York, pushed McCarrick away. "One thing he distinctly remembers is that McCarrick told him not to tell anyone about it," Noaker said.

In the weeks after the allegations were made public, others came forward to say McCarrick had sexually abused them, according to published reports.

An investigation by the Archdiocese of New York found the allegations against McCarrick to be "credible and substantiated" and handed the matter over to law enforcement last year.

The ruling will place further interest in next week's meeting of top Catholic officials from around the world to discuss the sex abuse crisis.

The unprecedented summit was called by Pope Francis in September to tackle the escalating problem -- but the five-month wait for the meeting to begin attracted criticism from survivors of sexual abuse, who slammed the "glacial pace" at which the church has moved to address the crisis.