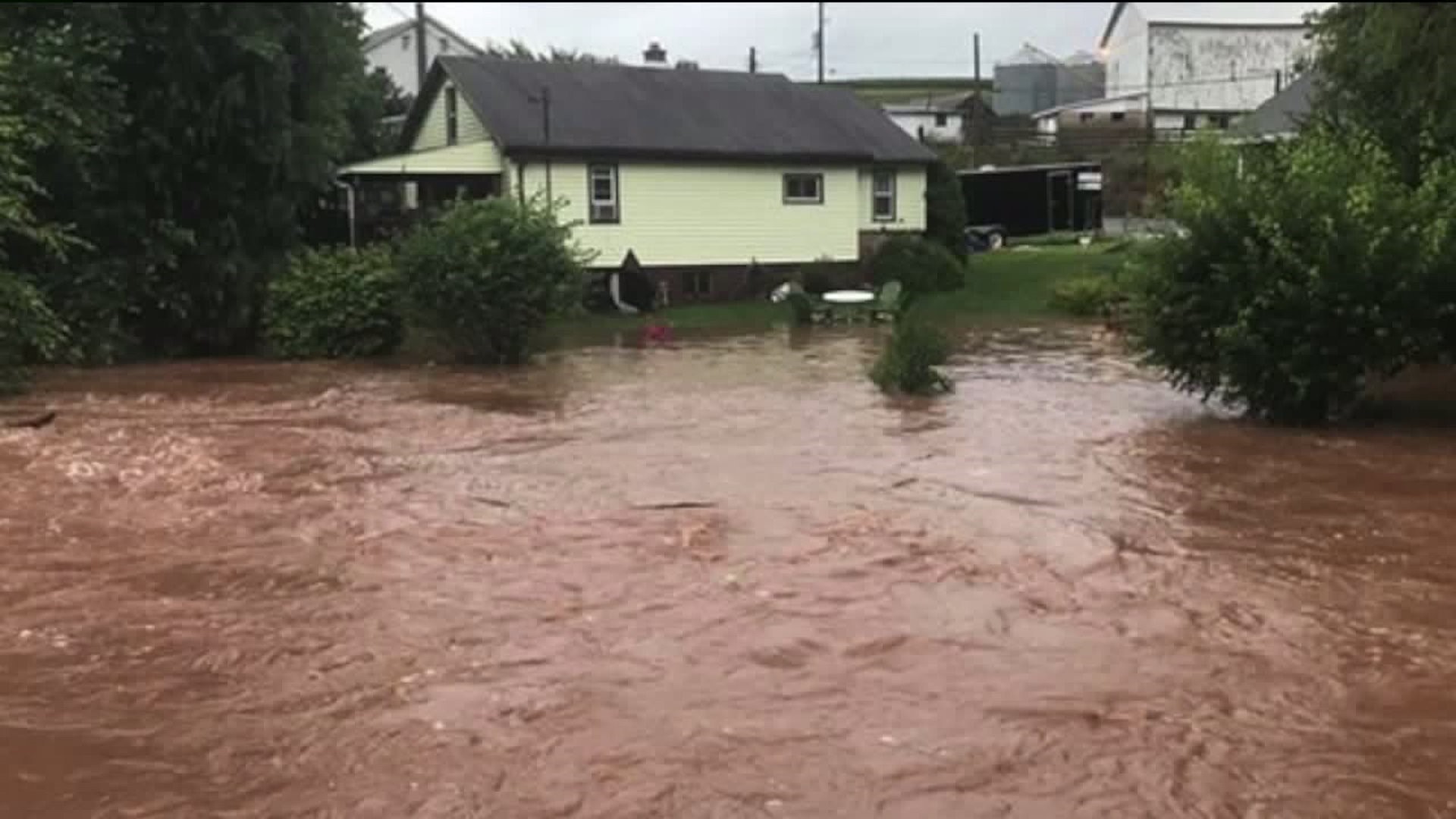 Homeowners living in places that never flooded before find themselves on the brink of losing everything.

He was about to show us his eroding back yard when it started to rain.

Even though Mix lives nowhere near a creek, spring and summer storms create them.

"It's like a river. I can't even, in front of my steps here I get even get over to my steps. It's unbelievable, unbelievable," said Mix.

At the back of the house is a greater danger - the foundation is eroding.

Edward Mix fears that when he sleeps at night, his house could go tumbling down into this 60 foot ravine.

Last year, the edge of the ravine sat six feet away from Mix's back porch now its much closer.

"It got to the point where I had to put these cables here, and turnbuckles and strap it to my foundation," said Mix.

Eighty miles southwest of Scranton, the sun is shining on Tremont in Schuylkill County.

On Clay Street, Christy Ney and Ladawn Shaffer fear a flash flood is just a storm cloud away.

"It's been horrible. when you have to schedule your life around a weather report," said Christy Ney, Tremont.

"Every time it rains at least two inches, we get it," said Ladawn Shaffer, Tremont.

Ladawn Shaffer's basement shows watermarks higher from flash storms than from the historic floods of 2011, when creeks that carve through the borough overflowed.

Now, those creeks are at normal levels. Yet during a hard summer rainstorm, runoff races down Clay Street overwhelming Tremont's drainage system.

"The President of Council says, 'Well, what do you want me to do about it? We don't have any money.' And I said, 'Well. I don't have the money to keep repairing either'," said Shaffer.

"With warmer air temperatures, there will be more evaporation and that means more moisture in the air, so when it does rain, it pours," said Shana Udvardy, Union of Concerned Scientists.

Shana Udvardy is a climate research analyst with the Union of Concerned Scientists in Washington D.C.

Udvardy says the entire northeastern United States will have to account for more rain when communities make flood maps, and permit new construction.

"This is the new normal that we are starting to experience and what we'll continually be challenged with into the future," said Udvardy.

The challenge in Tremont is to find out why neighborhoods are suddenly flooding. On top of record rainfall, Borough Council President Bob Donmoyer points to neighboring Frailey Township.

"Because all these trees have been removed, we have a lot of runoff," said Bob Donmoyer, Tremont Borough Council.

Runoff, Donmoyer says, comes because the acres of trees on this now barren hillside no longer keep gallons of rainwater from flowing downhill towards Tremont.

The clear cutting is on private property and Donmoyer says its legal.

"I think there should be some laws about that, especially when it effects communities getting flooded as a result of that," said Donmoyer.

It caused Ladawn Shaffer to move belongings once stored in her basement upstairs leaving her living room looking like a storage area.

"Who would buy my house? If I could sell my house today, I would be out of here," said Shaffer.

Edward Mix wants to stay in his home in Scranton.

He's downhill from says a nursing home's expanded parking lot and several trees that were cut to protect utility lines.

If rainfall was normal, this might not threaten his home.

"Its already sloping, do you see the slope? I could go at any minute," Said Mix.

Shana Udvardy of the Union of Concerned Scientists says the level of rain is expected to remain high for several years.

As a result, governments may have to consider relocating people as they now do for people who live in low-lying areas near rivers and streams.