MONTOURSVILLE, Pa. — Before January of this year, if you needed treatment from a Life Flight medical helicopter crew, there was a lot they could do to hel... 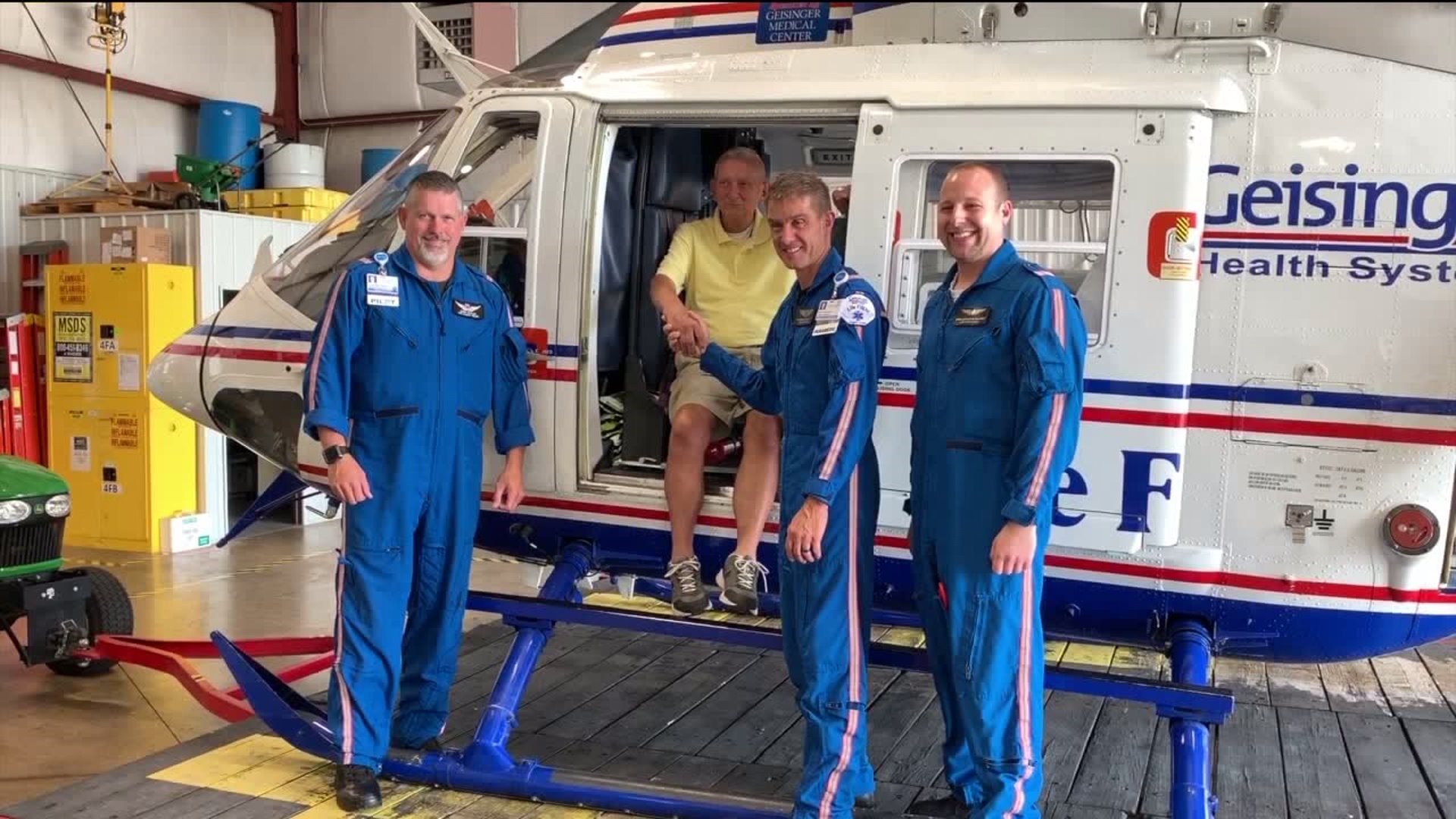 MONTOURSVILLE, Pa. -- Before January of this year, if you needed treatment from a Life Flight medical helicopter crew, there was a lot they could do to help save you, but they couldn't give you blood.

That has now changed, and officials say they're seeing a big difference because of it.

At the Life Flight hangar near Williamsport Regional Airport in Montoursville, 78-year-old Donald Stark of Lewisburg made his way into a medical helicopter on his own, this time. He was happy to pose for a picture with the crew who helped save his life.

His story starts back in May with some stomach pain.

"One Friday night, it got so bad, we sat down for supper and I couldn't eat. I said, 'I gotta go to the emergency room,'" Stark recalled.

His wife Becky hurried him to Evangelical Community Hospital near Lewisburg. He was waiting to be seen when things went black.

"I was standing there and I felt something in my stomach, next thing I knew, I passed out."

He didn't know it at the time, but Donald had two abdominal aortic aneurysms, one of them rather large, that burst. He was bleeding internally. Experts say that's a life-threatening situation.

Life Flight was called to get Donald to Geisinger Medical Center.

John Harahus was one of the nurses on board.

"It requires treatment by a vascular surgeon. Usually the survival rate for a ruptured aneurysm -- and in his case, he was also in cardiac arrest -- is less than 2 percent.

Pilots say the flight from Lewisburg to Danville is only about seven to eight minutes, but in that time, John was given a blood transfusion immediately using the blood program, new to Life Flight just this year.

Flight nurse Steve Davis spearheaded the project, which includes having blood and properly storing it for possible use in flight under the right circumstances, instead of waiting until the patient gets to a hospital.

"During the trauma, out on the scene, we didn't have blood available to the patient when they actually needed it," Davis said.

Davis says it's now available on all Life Flight choppers and has been a success.

"We have given blood 30-plus times already. We have saved multiple lives," Davis said.

"We honestly didn't think he would make it, given he was in cardiac arrest. He'd lost a lot of blood in his abdomen. We saw him that Tuesday and he was up out of his chair like nothing happened!" Harahus added.

Now, seeing Donald Stark, getting to joke with him, officials say they see firsthand that the blood program can work in the right cases.

And Donald and his wife Becky say they are grateful for it.

"It just worked out. They did it and they got it done and here I am," he said.

Crews admit there are always risks with blood transfusions, but in some trauma situations, those risks may be worth taking if it means saving a patient's life.

Steve Davis also points out there's always a need for blood and reminds people to donate blood if they're able.