PLAINS TOWNSHIP, Pa. — An emergency medical official in Luzerne County has no doubt he was in the right place at the right time this summer. He was on a t... 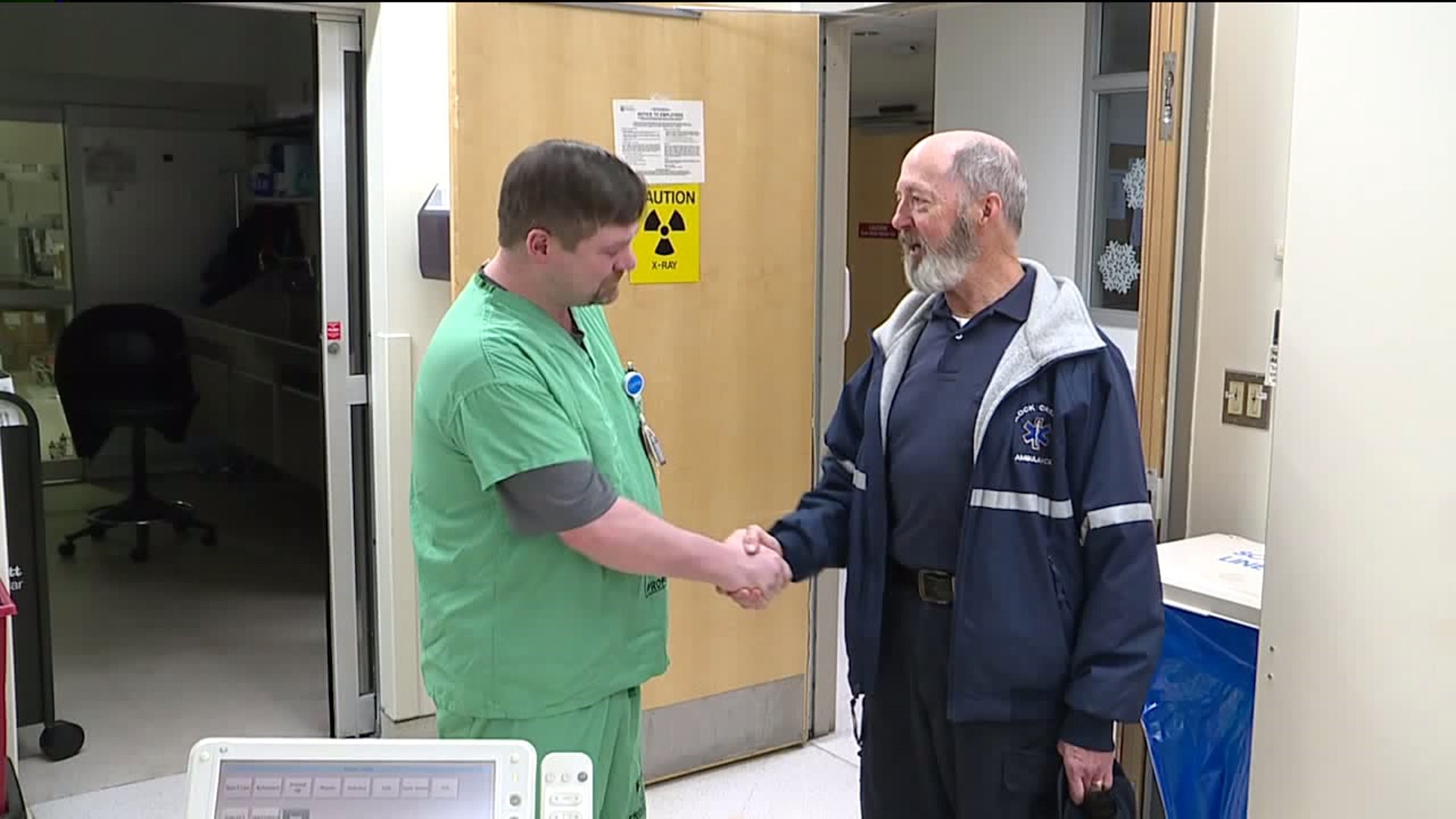 PLAINS TOWNSHIP, Pa. -- An emergency medical official in Luzerne County has no doubt he was in the right place at the right time this summer. He was on a trauma call when he recognized he was having a heart attack.

As a volunteer EMT for Hunlock Creek in Luzerne County, Ricky Benscoter, 67, has been on hundreds of calls, but one in August changed his life.

There'd been a crash on Route 11, it was raining, and the patient was in bad shape.

"He was in critical condition. We actually called for Life Flight to have Life Flight take him to the hospital, but due to the weather that day, we were unable to get Life Flight," he recalled.

They had no choice but to bring the man to Geisinger Wyoming Valley Medical Center by ambulance.

"Just before we got off the interstate, I started having chest pains myself. I didn't tell anybody because we have this trauma patient we're trying to take care of," Ricky said. "It was really severe stabbing chest pain, and it was radiating down my left arm."

Only after the patient had been dropped off did Ricky finally tell a fellow EMT what was happening.

"I remember him saying, 'Hey! We have another patient!' pointing to my head. The nurse said, 'what do you mean' another patient? Where did he come from?'"

Within minutes, Ricky was in a cath lab, being reassured by a nurse.

"I remember talking to Kevin -- I don't know why I remember his name -- and it's a good thing it all happened so fast," Ricky said.

Ricky had a 100 percent blockage of the LAD, the left anterior descending artery. That's the artery that feeds most blood to your heart.

Doctors were able to restore blood flow by inserting a stent.

Dr. Bernardi explains the goal is to get that artery open no more than 90 minutes after the first heart attack recognition, which is why knowing the signs is so important.

"It's usually chest discomfort, but it could be shortness of breath, could be overwhelming fatigue, could be profuse sweating. It's usually not subtle. It's significant, and it should never be ignored," Dr. Bernardi said.

Ricky doesn't want to think about what might have happened had he not already been on his way to the hospital.

"One of the cardiologists told my EMTs that if I had been at home, I would be dead."

And by the way, he found Kevin to say thanks.

Ricky admits in hindsight, he was experiencing shortness of breath that he brushed off, something he won't do again.

In the 10 weeks since his heart attack, he's undergone cardiac rehab, has lost 20 pounds, cut his cholesterol in half, is feeling great, and back as a volunteer EMT once again.