The president said on Twitter that his lawyer, the former New York mayor, has the coronavirus. 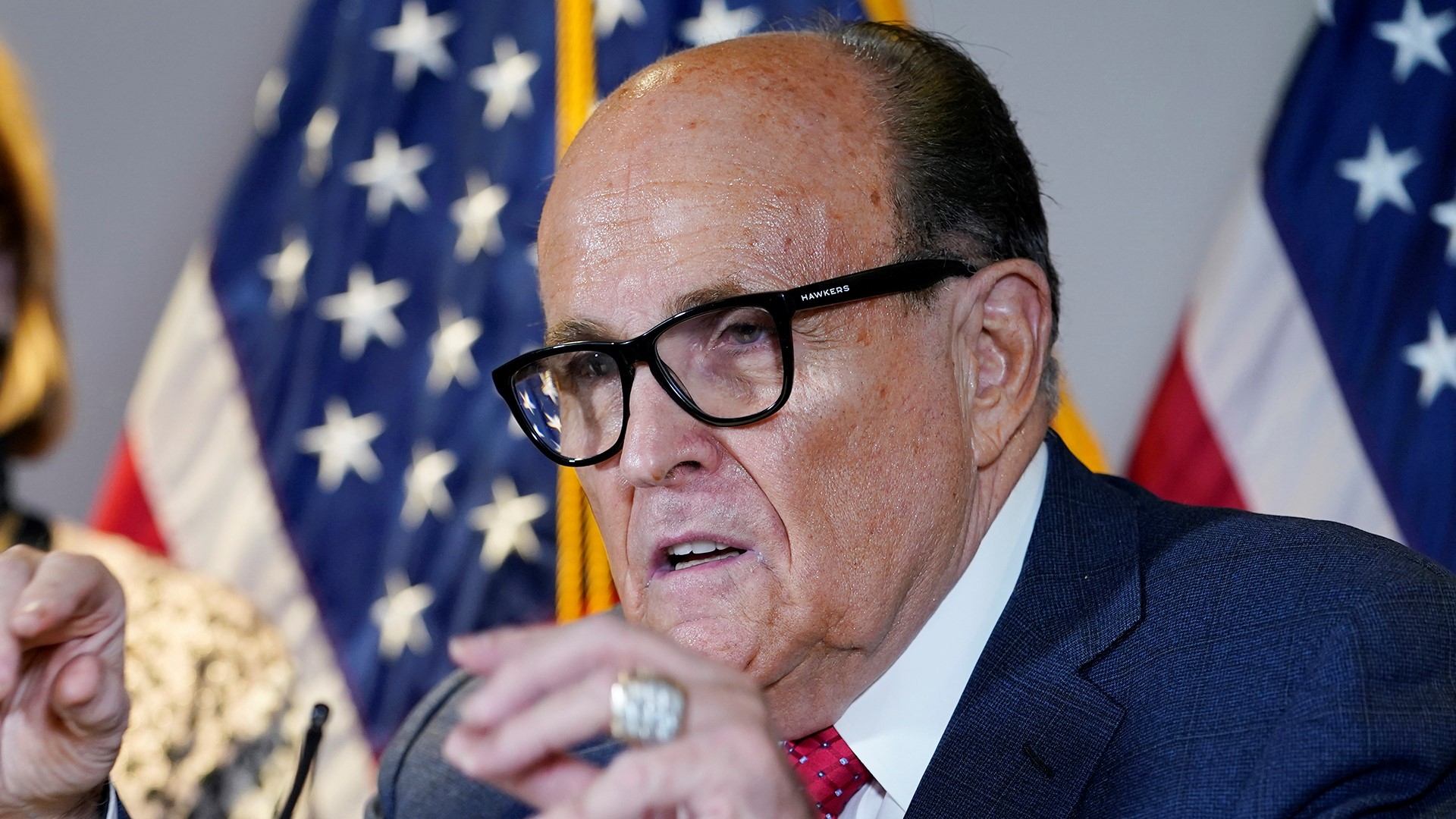 WASHINGTON — Editor's note: The related video above was published Nov. 19.

Giuliani exhibited some symptoms and was admitted Sunday to Georgetown University Medical Center in Washington, according to a person familiar with the matter who was not authorized to speak publicly.

Trump tweeted Sunday afternoon that Giuliani has the coronavirus, saying "get better soon Rudy, we will carry on." Giuliani has been part of the president's efforts to challenge the legitimacy of the election.

"Thank you to all my friends and followers for all the prayers and kind wishes," Giuliani said Sunday night on Twitter. "I’m getting great care and feeling good. Recovering quickly and keeping up with everything."

Thank you to all my friends and followers for all the prayers and kind wishes.

Recovering quickly and keeping up with everything.

The 76-year-old has traveled extensively to battleground states in recent days and weeks. On numerous occasions he has met with local officials for hours at a time without wearing a mask.

Giuliani did not immediately respond to a request for comment from The Associated Press, but on Sunday evening he retweeted Trump's announcement of his diagnosis. He also tweeted thanks to a conservative writer who had said he was praying for Giuliani.

Trump has been seeking to overturn President-elect Joe Biden's win of the vote, with Giuliani appearing in court for the first time in decades to argue what have been found as baseless claims that election fraud occurred.

He made an appearance earlier Sunday on Fox News to speak about his legal challenges in several states on behalf of Trump.

RELATED: After Trump leaves White House, his tactics to overturn election could stay

.@RudyGiuliani, by far the greatest mayor in the history of NYC, and who has been working tirelessly exposing the most corrupt election (by far!) in the history of the USA, has tested positive for the China Virus. Get better soon Rudy, we will carry on!!!

Giuliani attended a hearing at the Georgia Capitol on Thursday where he went without a mask for several hours. Several state senators also did not wear masks at the hearing.

On Wednesday night, Giuliani was in Lansing, Michigan, to testify in a highly unusual 4 1/2-hour legislative hearing in which he pushed Republican lawmakers to ignore the certification of Biden’s Michigan victory and appoint electors for Trump. He did not wear a mask, nor did lawyer Jenna Ellis, who was sitting next to him. At one point, he asked one of his witnesses — a Detroit election worker — if she would be comfortable removing her mask. But legislators said they could hear her.

Giuliani traveled on Monday to Phoenix where he met with Republican legislators for an hourslong hearing in which he was maskless. The Arizona Republican Party tweeted a photo of Giuliani and several state GOP lawmakers standing shoulder-to-shoulder and maskless. The Arizona legislature announced Sunday, after Giuliani's diagnosis became public, that it would close for a week out of an abundance of caution "for recent cases and concerns relating to COVID-19."

The Trump campaign said in a statement that Giuliani tested negative twice before his visits to Arizona, Michigan and Georgia. Unidentified Trump team members who had close contact with Giuliani are in self-isolation.

"The Mayor did not experience any symptoms or test positive for COVID-19 until more than 48 hours after his return," according to the statement. "No legislators in any state or members of the press are on the contact tracing list, under current CDC Guidelines."

He also appeared maskless at a Nov. 25 hearing in Pennsylvania. And Giuliani did not quarantine after being near an infected person at a Nov. 19 news conference at the Republican National Committee’s headquarters. His son Andrew Giuliani, who is a White House aide, announced a day after the event that he had tested positive for the virus. He tweeted Nov. 20 that he was experiencing mild symptoms and was in quarantine and conducting contact tracing.

The White House and Trump administration have been impacted by several outbreaks of the virus this fall.

Research shows that people who contract the virus may become infectious to others several days before they start to feel ill.

"Little did I know that most credible death threat that I encountered last week was Trump’s own lawyer," Jordan tweeted. "Giuliani — maskless, in packed hearing room for 7 hours. To say I am livid would be too kind."

Before the hearing, Giuliani and Michigan Republican Party Chairman Laura Cox — both maskless — did a virtual briefing for GOP activists.

The diagnosis comes more than a month after Trump lost reelection and more than two months after Trump himself was stricken with the virus in early October. Since then, a flurry of administration officials and others in Trump's orbit have also been sickened, including White House chief of staff Mark Meadows and Ben Carson, the secretary of housing and urban development. The president's wife, Melania Trump, and teenage son, Barron Trump, have also been stricken.

The extraordinary spread in Trump’s orbit underscores the cavalier approach the president has taken to a virus that has now killed more than 280,000 people in the U.S. alone.

Those infected now also include White House press secretary Kayleigh McEnany and advisers Hope Hicks and Stephen Miller, as well as Trump’s campaign manager and the chair of the Republican National Committee.

Trump spent the waning days of his campaign trying to persuade the American public that the virus was receding, and repeatedly claimed it would miraculously "disappear" after Nov. 3. Instead, the country is experiencing a record-breaking spike in infections.

The president gave the mounting coronavirus death toll scant attention at a Saturday evening rally in Valdosta, Georgia, where he campaigned on behalf of Republican Sens. Kelly Loeffler and David Perdue ahead of next month's runoff election there. Most people who attended the outdoor rally did not wear masks.

RELATED: Trump spreads baseless allegations of voting misconduct in Georgia, beyond at rally

Asked about Trump and other administration members flouting public health experts' warnings to avoid large gatherings and calls to wear masks, Birx replied that some leaders are "parroting" myths and called the pandemic "the worst event that this country will face."

"And I think our job is to constantly say those are myths, they are wrong and you can see the evidence-base," Birx added.

NEW: Dr. Deborah Birx says “our job is to constantly say, ‘those are myths’” when asked about disinformation. #MTP

“It is frustrating because not only do we know what works, governors and mayors used those tools to stem the tide in the spring and the summer.” pic.twitter.com/5LbgUGnGFm