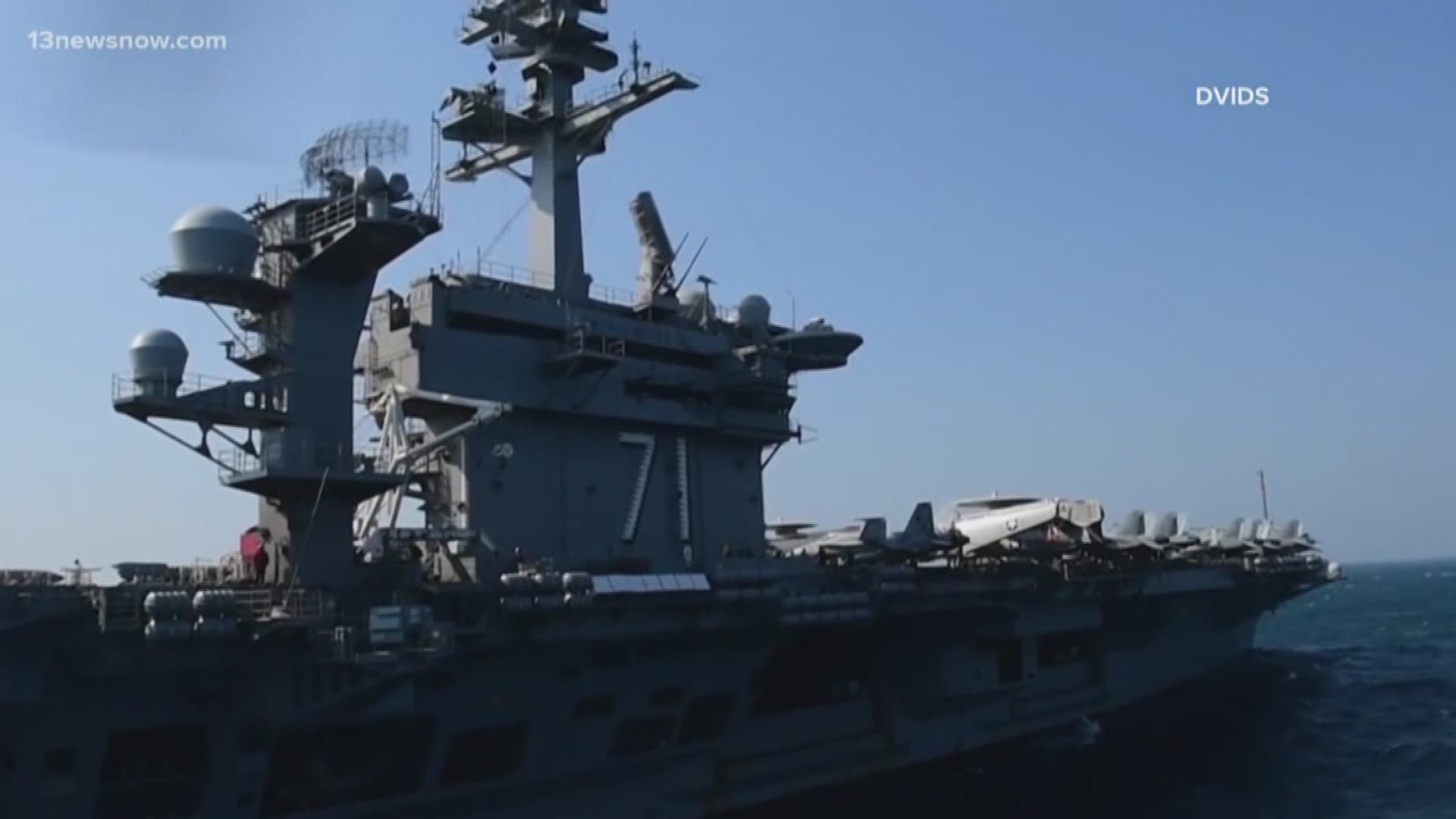 WASHINGTON — Acting Navy Secretary Thomas Modly has turned in his resignation only a day after he was heard in leaked audio calling an ousted commander of the USS Theodore Roosevelt "stupid."

As of Tuesday afternoon, neither the Navy nor the Department of Defense had officially responded to further clarify the move.

In an extraordinary broadside punctuated with profanity, the Navy’s top leader accused the fired commander of the coronavirus-stricken USS Theodore Roosevelt of being “too naive or too stupid” to be in charge of an aircraft carrier. He delivered the criticism to sailors who had cheered the departing skipper last week.

Hours after the remark was widely reported in the news media, acting Navy Secretary Thomas Modly first issued a written public apology, saying he does not believe Capt. Brett E. Crozier is stupid or naive.

“I apologize for any confusion this choice of words may have caused,” Modly wrote late Monday evening, referring to his speech aboard the Roosevelt on Sunday. “I also want to apologize directly to Captain Crozier, his family, and the entire crew of the Theodore Roosevelt for any pain my remarks may have caused.”

According to a person familiar with the conversation, Defense Secretary Mark Esper’s staff told Modly he must apologize. The official spoke on condition of anonymity to discuss a private conversation.

Modly had flown to Guam over the weekend and went aboard the carrier to deliver a lengthy and passionate speech. Crew members are being taken off the ship to be tested for the coronavirus. At least 173 sailors aboard the ship have tested positive, as of Monday, and about 2,000 of the 4,865 crew members had been taken off. The Navy has offered no estimate of when the ship might return to duty.

While skewering Crozier, Modly also admonished the crew. He suggested that by cheering Crozier when he departed the carrier last week, they were overlooking their most basic duty to defend U.S. interests.

“So think about that when you cheer the man off the ship who exposed you to that,” he said. “I understand you love the guy. It's good that you love him. But you're not required to love him.”

Credit: AP
In this photo U.S. Navy Capt. Brett Crozier, commanding officer of the aircraft carrier USS Theodore Roosevelt (CVN 71), addresses the crew during an all-hands call on the ship's flight deck while conducting routine operations in the Eastern Pacific Ocean. U.S. defense leaders are backing the Navy's decision to fire the ship captain who sought help for his coronavirus-stricken aircraft carrier, even as videos showed his sailors cheering him as he walked off the vessel. Videos went viral on social media Friday, April 3, 2020, showing hundreds of sailors gathered on the ship chanting and applauding Navy Capt. Brett Crozier as he walked down the ramp, turned, saluted, waved and got into a waiting car. (U.S. Navy Photo by Mass Communication Specialist 3rd Class Nicholas Huynh via AP)

RELATED: Sen. Warner responds to Capt. Crozier being ousted by Navy for coronavirus response letter that was leaked

President Donald Trump on Monday said he may get involved, agreeing that Modly's criticism of Crozier was “a rough statement.” He said Crozier made a mistake when he sent a memo to several people laying out his concerns about the crew and the virus. The memo was leaked to the media.

Trump said Crozier had a good career prior to this incident, adding, “I don't want to destroy somebody for having a bad day.” 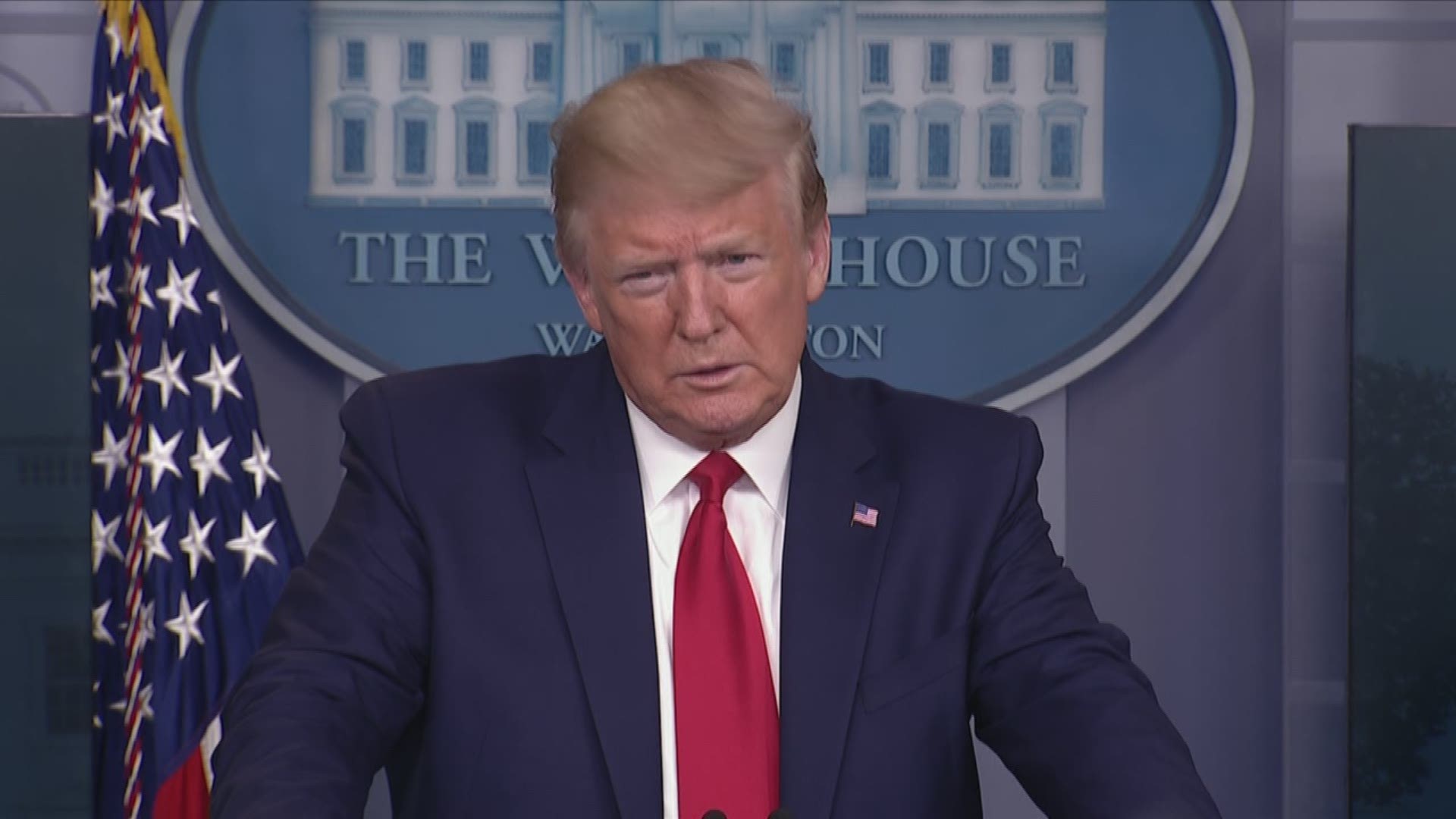 Modly relieved Crozier of command of the ship last week, saying he had lost confidence in him for having shown “extremely poor judgment” in widely distributing the memo pleading for an accelerated evacuation of the crew to protect their health. The dismissal quickly turned into a hot political issue, with Democrats saying Crozier was wrongly fired for defending his sailors, and Trump denouncing Crozier and backing Modly.

In his apology Monday night, Modly said he believes Crozier is “smart and passionate.”

“I believe, precisely because he is not naive and stupid, that he sent his alarming email with the intention of getting it into the public domain in an effort to draw public attention to the situation on his ship,” Modly wrote.

Speaking on the ship, Modly urged the crew to stop complaining about their predicament, which he said made the Navy look weak. He suggested that some aboard the Roosevelt, including Crozier, had forgotten what matters most.

“It is the mission of the ship that matters,” he said. “You all know this, but in my view your Captain lost sight of this and he compromised critical information about your status intentionally to draw greater attention to your situation.”

U.S. officials said Navy leaders, including Adm. Mike Gilday, chief of naval operations, argued that an investigation should be done before taking action. The officials spoke on condition of anonymity to discuss internal deliberations.

The Sunday comments by Modly added fuel to the political fire, with at least one member of Congress urging he be fired.

An unofficial transcript of Modly's remarks, as well as an audio recording, circulated widely on the internet Monday — demonstrating the slippery landscape that Modly accused Crozier of failing to navigate.

Modly, a 1983 Naval Academy graduate, became the acting Navy secretary last November after Richard Spencer was ousted from the position. Trump last month nominated retired Rear Adm. Kenneth Braithwaite, the current ambassador to Norway, to be the next Navy secretary.

In his remarks aboard the Roosevelt, Modly raised issues likely to please Trump. He accused the news media, for example, of manipulating a political agenda to divide the country and embarrass the Navy. He said China “was not forthcoming” about coronavirus when it began spreading there months ago, echoing Trump's oft-repeated statement that China could have done more to prevent a pandemic.

And Modly invoked the name of Trump's chief Democratic challenger, Joe Biden, noting that the former vice president had said Modly's decision to fire Crozier was almost criminal. “I assure you it was not,” Modly said.

Modly said Crozier should have known his letter would leak to the media, allowing information about the ship's compromised condition to be published. If Crozier didn't think this would be the result, he was “too naive or too stupid to be a commanding officer of a ship like this."

He also accused Crozier of betraying his duty as an officer. “And I can tell you one other thing, because he did that he put it in the public's forum and it's now become a big controversy in Washington D.C., and across the country,” Modly said.

Shortly after reports of Modly's accusations against Crozier began circulating in the news media Monday morning, some Democrats fired back.

“Based on the transcript I’ve read, Secretary Modly’s comments were completely inappropriate and beneath the office of the Secretary of the Navy,” Sen. Tim Kaine of Virginia said in a statement. “It’s deeply disappointing that he would deliver a speech on board a U.S. aircraft carrier suggesting that Captain Crozier might be ‘stupid’ and bashing the media for trying to report the truth. These dedicated sailors deserve better from their leadership.”

Rep. Elaine Luria, a Virginia Democrat and Navy veteran, called for Modly to be fired, saying his remarks show he is “in no way fit” to lead the Navy.

Gilday has ordered an investigation into the matter, and the report by Adm. Robert Burke, the vice chief of naval operations, was initially expected Monday. Gilday has approved an extension and the report is now expected by week's end.