MLB commissioner confident season can get through playoffs despite coronavirus

Just 1 1/2 weeks into a pandemic-delayed regular baseball season shortened from 162 games per team to 60, COVID-19 has forced 19 postponements. 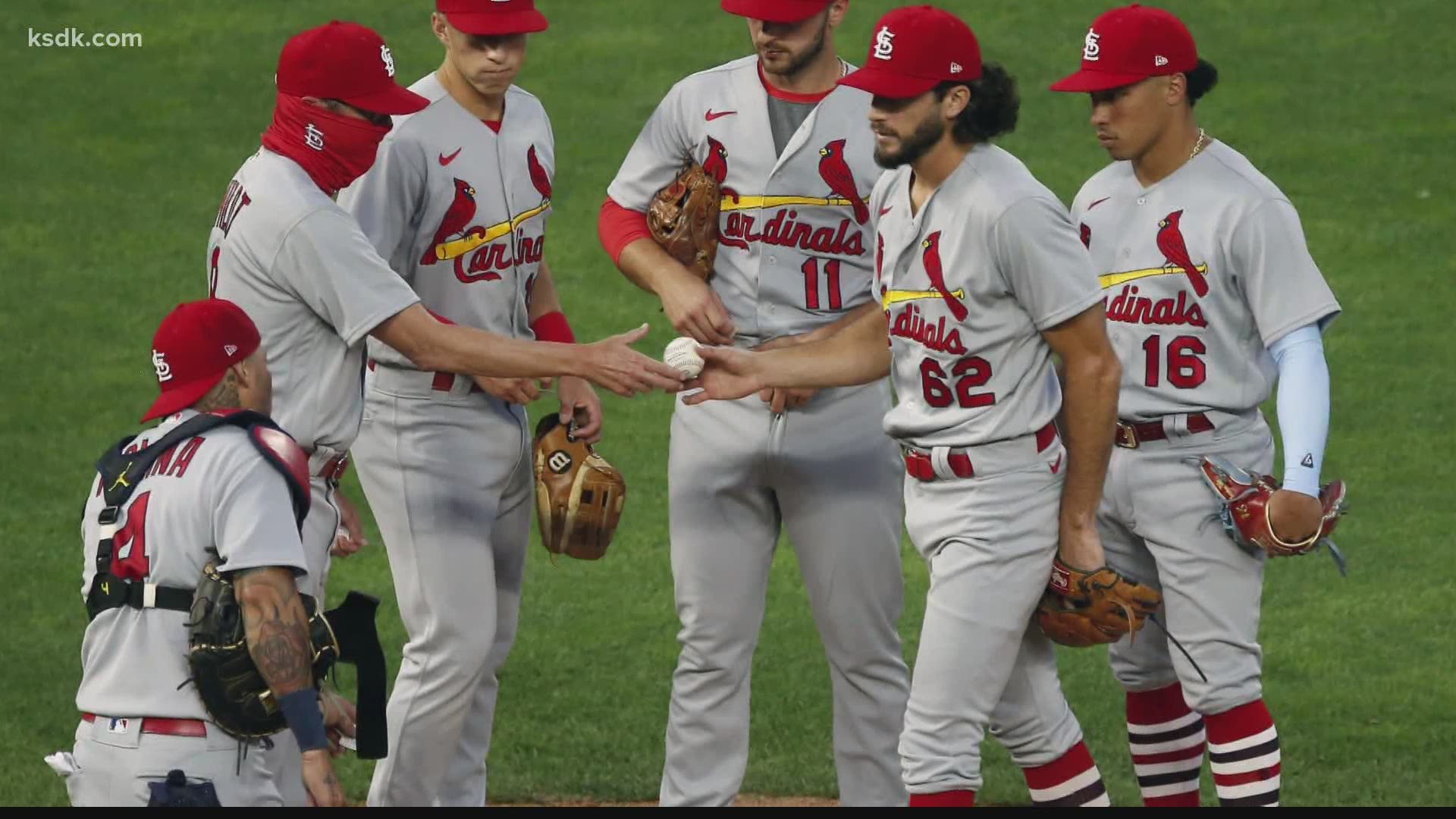 NEW YORK — Baseball Commissioner Rob Manfred says he's confident his sport can get through the regular season and postseason without being stopped by the coronavirus, though not every team might play all 60 games and winning percentage could be used to determine playoff teams.

During an interview Saturday with The Associated Press, Manfred said Major League Baseball knows which player introduced COVID-19 into the clubhouse of the Marlins Marlins. Miami and Philadelphia both postponed games for an entire week.

“I think that if everybody does what they are supposed to do, we can continue to play, have a credible season and get through the postseason,” Manfred said.

Just 1 1/2 weeks into a pandemic-delayed regular season shortened from 162 games per team to 60, the coronavirus has forced 19 postponements in 11 days, including St. Louis' three-game weekend series at Milwaukee.

At least 18 Marlins players have been infected along with two St. Louis Cardinals.

RELATED: MLB commissioner reportedly warns of shut down if coronavirus not better managed

Manfred had what he said was a constructive conversation Friday with union head Tony Clark, and expects stepped-up efforts by players and teams to adhere to special virus protocols put in place by MLB and the players’ association.

“It is what the public health experts have been saying from the beginning about this, that there is no one big magic fix,” Manfred said.

Still, he does expect more issues.

“I don’t think it’s realistic to think that we’re not going to have any more positive tests,” Manfred said. “We're going to be fluid. We think it’s manageable and we’re going to continue to try to manage it.”

Miami, which last played July 26 at Philadelphia, was set to resume its schedule Tuesday at Baltimore. The Phillies are due back Monday at Yankee Stadium.

“Once you have somebody who starts producing the virus, what seemed like harmless protocol code violations become serious issues,” Manfred said.

Toronto missed its weekend series against the Phillies. Blue Jays pitcher Matt Shoemaker was against a bubble-environment such as the NBA and MLS are using and understood Manfred’s urging of stricter adherence.

“I don’t take Rob’s comments as a personal attack at all because I know we are doing better and some teams might not be, so hopefully they do better,” Shoemaker said. “If guys are going out to clubs or bars that is irresponsible to say the least, if that’s what happened. We have guys not doing that which is great from a team standpoint. We want to play baseball.”

The entire Cardinals-Brewers series at Miller Park was scrapped. After two St. Louis players tested positive, the whole Cardinals team was given rapids tests Friday and saliva samples were sent to an MLB laboratory that indicated a third player and multiple staff members may be positive.

In addition, the Cardinals will play four games at Detroit from Tuesday through Thursday, including a doubleheader Wednesday, rather than two games at Comerica Park followed by two at Busch Stadium. MLB said the changes were due to additional testing and monitoring of the Cardinals.

MLB-mandated monitors have been accompanying teams on the road since Wednesday in an effort to cause stricter adherence to the protocols.

“I think it’s a top-down thing,” Yankees pitcher James Paxton said. “I think that if your leadership is showing how important it is and you’ve got the front office like we have here taking it very seriously, I think that then that’ll trickle down to the players taking it seriously.”

Given all the schedule changes, MLB is considering whether active rosters should remain at 30 rather than decrease to 28 on Thursday, as scheduled. No decision has been made.

“This is kind of a day-to-day thing right now,” Manfred said. “You’ve just got to get up in the morning and figure out a way to keep going through another day to stay safe for people.”

There’s a chance not all teams will be able to get in 60 regular-season games.

“We’ve got to be flexible on that,” Manfred said. “Look, this is one of the reasons that we revisited the issue off the expanded playoffs. If it turns out that some guys play 60, some guys play 58, they have this new thing called winning percentage. We can sort that out.”

In another rule change that started this weekend, all doubleheaders for the rest of the season will have a pair of seven-inning games rather than nine-inning contests. The first twinbill under the 2020 change will be between Cincinnati and Detroit at Comerica Park on Sunday following a rainout on Saturday.

“Doubleheaders were problematic from a health perspective from the very beginning of our planning. That’s why we were reluctant to get into scheduling a bunch of doubleheaders just to play more games,” Manfred said.

“It’s just too long together and extended periods inside a clubhouse. As we’ve had to move to rescheduling and been forced into some doubleheaders, I think the reality just became that we should do everything we can to shorten those days up from a health perspective," he said.

MLB said no Phillies players have tested positive for COVID-19 in the past week and while three staff members have tested positive, it appeared two were attributable to false positives and the third, based on the timing of the positive test, may not have contracted COVID-19 from the Marlins. The Phillies were permitted to access Citizens Bank Park for staggered workouts beginning Saturday.

“There’s risk in everything we do,” Phillies manager Joe Girardi said. “I know that we’ve done a -- knock on wood -- a really good job of controlling our atmosphere here. And I think it’s important that everyone does that. You can’t slip up, you can’t make a bad decision because it can really cost your organization the game of baseball and everything.”

MLB rescheduled the postponed Phillies-Yankees games of this week for next week, in New York on Monday and Tuesday and in Philadelphia on Wednesday and Thursday. New York’s game at Tampa Bay on Thursday was rescheduled as part of a doubleheader on Aug. 8.

“What the virus has taught us is this is a day-by-day, week-by-week situation that we live in,” Yankees manager Aaron Boone said.

Miami will play a four-game series in Baltimore from Tuesday through Thursday, with one game a doubleheader. The Marlins will be the home team for two games.

MLB said it will reschedule the missed Yankees-Orioles game and Marlins-Phillies series. In addition, Manfred says players and coaches should take advantage of the open seats in the stands near the dugouts and bullpens in order to spread out.

St. Louis has not been to Miller Park since arriving in Milwaukee, and the Brewers have not reported any positive tests among their players since the season began. Cain, a two-time All-Star, joined Los Angeles Dodgers pitcher David Price and San Francisco catcher Buster Posey as the most high-profile players to opt out.

“With all of the uncertainty and unknowns surrounding our game at this time, I feel that this is the best decision for me, my wife, and our three kids,” Cain said in a statement.

Chicago Cubs pitcher Jon Lester is trying to keep positive with all the dizzying news and not worry about the season screeching to a stop.

“Hopefully that’s not a conversation we have to have as far as packing back up and going home and kind of trying again in spring training,” he said.