Going All Out for Wyoming Area Football

EXETER, Pa. — Up and down Wyoming Avenue in Exeter are signs of support for the Wyoming Area football team. For the first time in school history, the Warr... 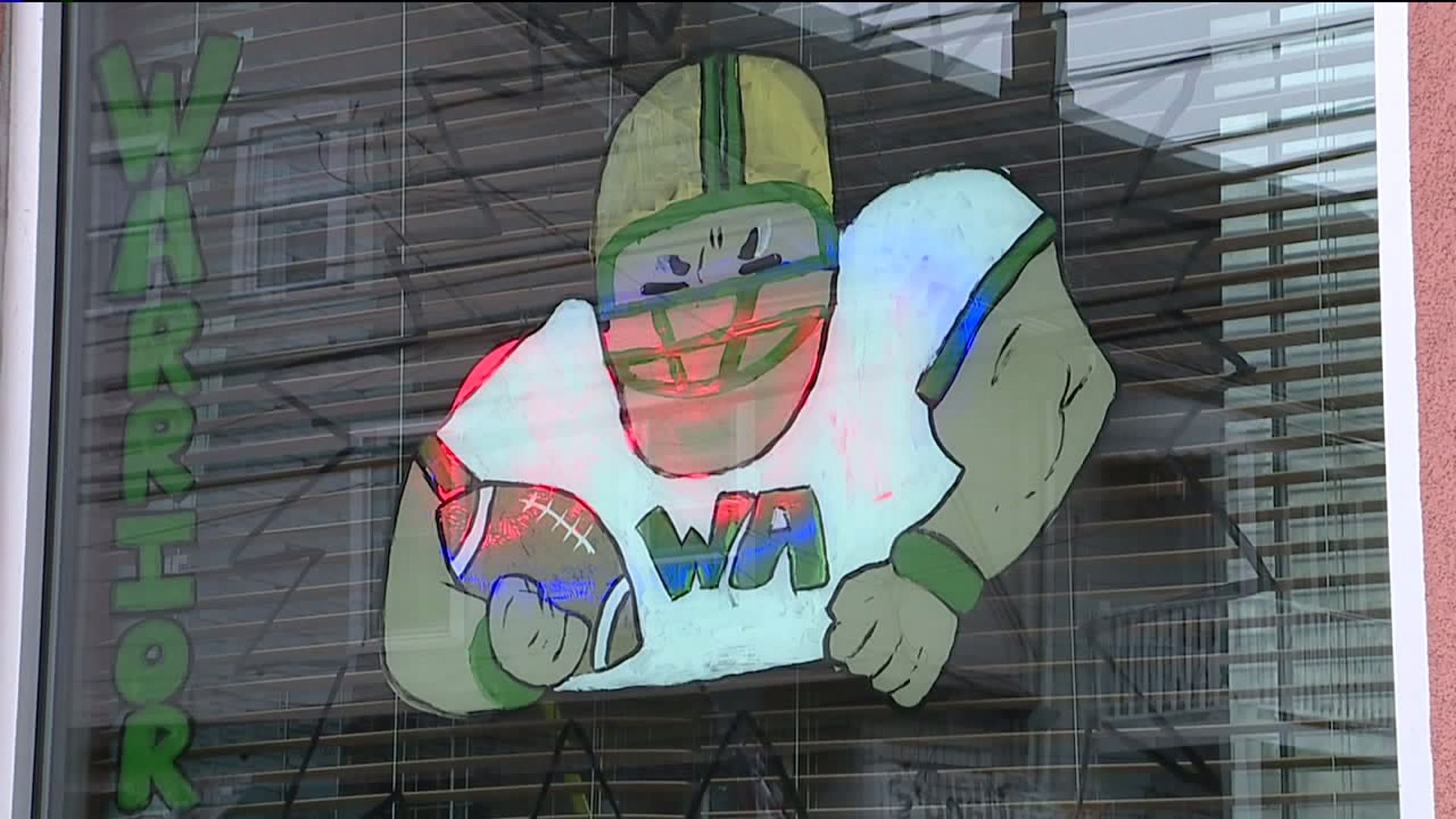 EXETER, Pa. -- Up and down Wyoming Avenue in Exeter are signs of support for the Wyoming Area football team. For the first time in school history, the Warriors are playing for the ultimate prize in Hershey.

"You know, it's really exciting to watch them week to week.  Just really appreciate it, being an alum, the success that they've had and the position they've put themselves in now," Cade Bekanich of Exeter said.

Everywhere you turn, you see the borough's pride for its football team on display. Shades of green and gold are everywhere, from storefront windows to signs ahead of Saturday’s class 3A state championship game. Wyoming Area will take on Central Valley out of the Pittsburgh area.

"It's an awesome time for the team. They've worked very hard and we'll be right with them tomorrow in spirit and we hope they do a great job. We know they will. We're sure they'll win and if they don't we still think they did an awesome job this year. We're very proud of them," Mildred Petrucci of Exeter said.

Included in all of this community support is support from local businesses. Balloon Works in Exeter put together a really impressive balloon display for the pep rally, which fittingly includes Hershey kisses as the Warriors make their run to Hershey.

"Everybody's so excited. This is the first time that Wyoming Area is going to state. It'd be great if they could bring home the trophy. Bring home the gold," Dominick Bartoli of Balloon Works said. 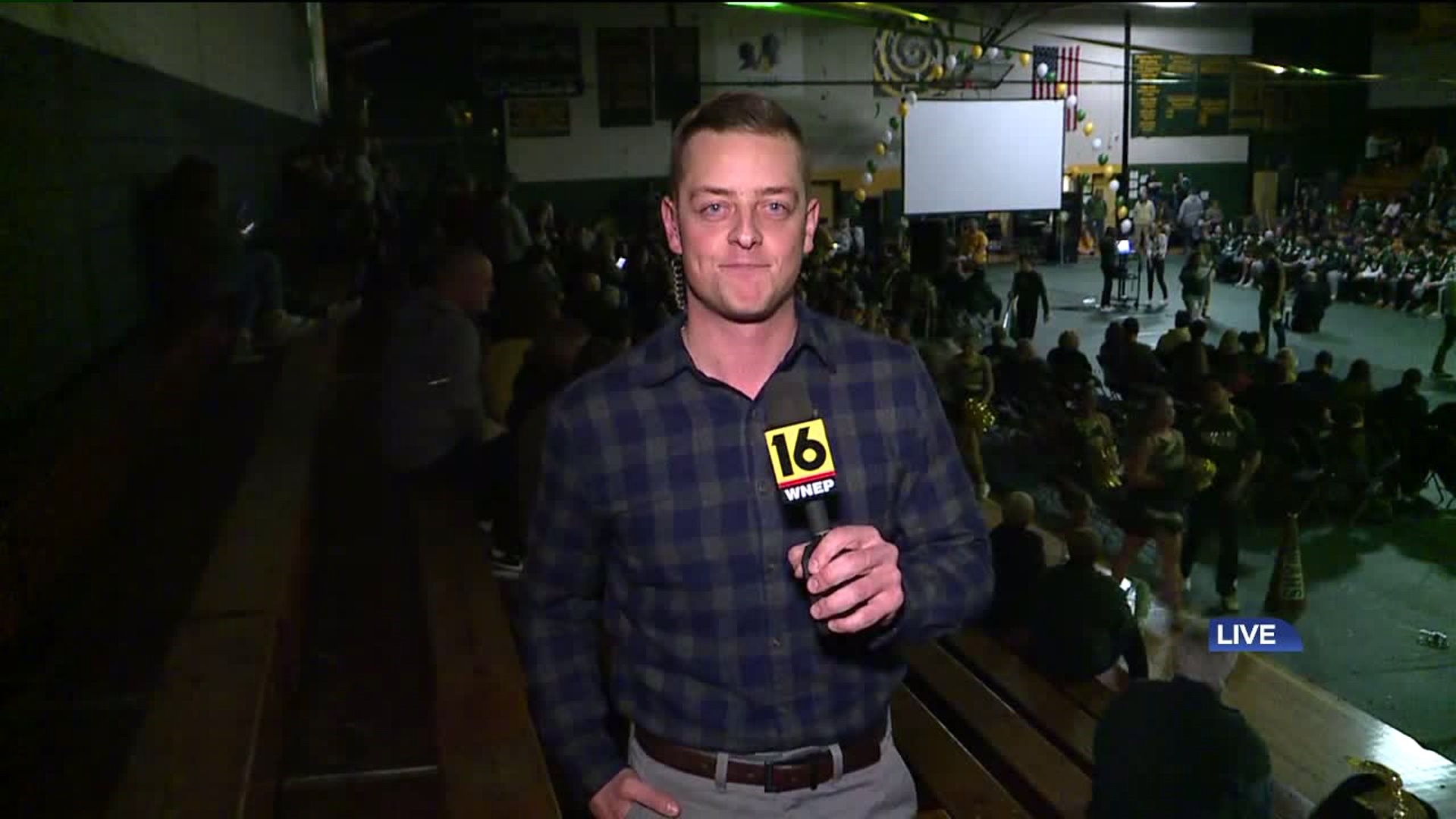 The gym at Wyoming Area High School was packed to the brim. The school day on Friday in Exeter cut a little bit short for a school-wide pep rally to celebrate the football team's journey to the state title game.

"What a tremendous year. It's been a magical year. We are certainly excited to continue that in Hershey tomorrow,” Wyoming Area Head Coach Randy Spencer said.

The hype and excitement were palpable from the start. The pep rally got started with the football team forming a playful mosh pit with a little crowd surfing. The students and players describing the atmosphere as extremely exciting.

And throughout this postseason, Wyoming Area has "lit up" its opponents, winning its playoff games by an average margin of victory of 25 points. A win over Central Valley on Saturday in the class 3A state championship would give Wyoming Area its first state title in school history.

"It's awesome that we're making history and going to state. It doesn't really feel like it's real. I've been dreaming about this since I was young. I hope we can all prove that we're good enough to play with everyone," senior quarterback Dominic Deluca said.

"It's the best feeling in the world. I thought we'd never be here me and my team, going all the way to Hershey. We were just worried about a district championship. Now we're here. It's a crazy feeling," senior lineman Dante Bovani said.

"When I look at this team, I remember them as their former elementary principal. So now to see them six, seven, eight years later as people who are much larger, but still great, awesome quality kids getting it done on the football field. How impressed I am with the coaching staff for bringing these kids along," Wyoming Area Principal Jon Pollard said.