The police chief said the officers were standing off to the side of the police line when they suddenly felt pain. 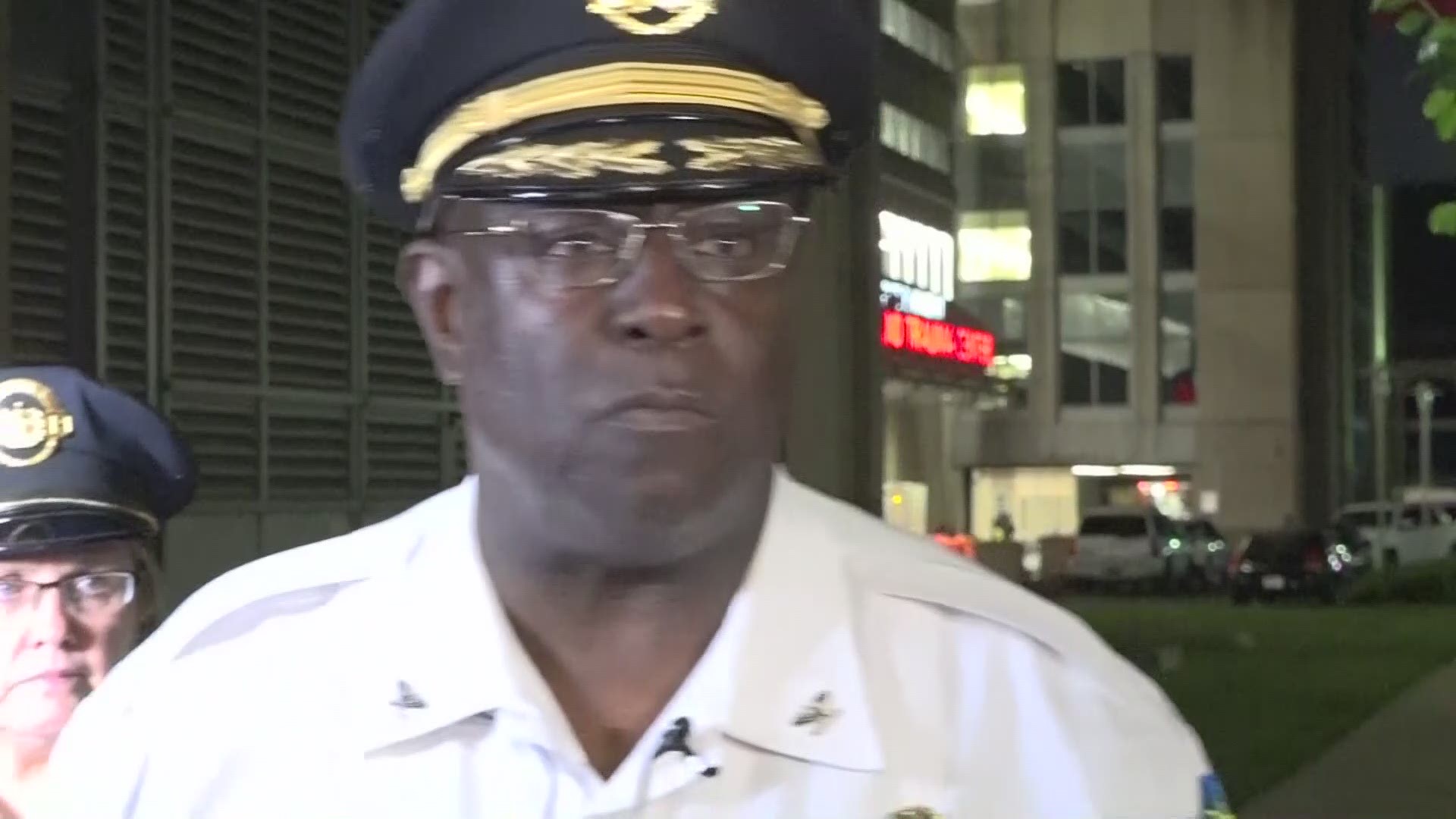 Hayden said all of the officers have been released from the hospital.

“I believe some coward randomly shot at the police line,” Chief Hayden said giving an impassioned update. He said at this time, police have no suspects and no descriptions of the person or persons who shot the officers.

Hayden said the officers were standing off to the side of the police line when they suddenly felt pain.

“Thankfully, thank God they’re alive,” the police chief said holding back tears. “Can we make some sense out of this? That’s all I’m trying to say.”

RELATED: 'Can we make some sense out of this?' | Emotional police chief pleads for answers after 4 officers shot in St. Louis

A large peaceful protest moved in and around the downtown area until about 8 p.m. Hayden said a much smaller group of about 200 people changed the mood.

“They obviously had no intention on protesting or doing anything constructive,” Chief Hayden said.

He said the rioters were hyping up the crowd, high fiving each other and flashing pistols. He said they started throwing things at officers and then looting all over downtown.

“Officers exhibited extraordinary restraint,” Hayden said, explaining that officers only took measures on the crowd when things got violent outside police headquarters at about 9 p.m. Police in riot gear threw tear gas at the crowd and started moving in lines to break up the rioters.

“There’s a pit in my stomach. I’m stunned. We need to pray for our city and pray for these officers,” Chief Hayden said. 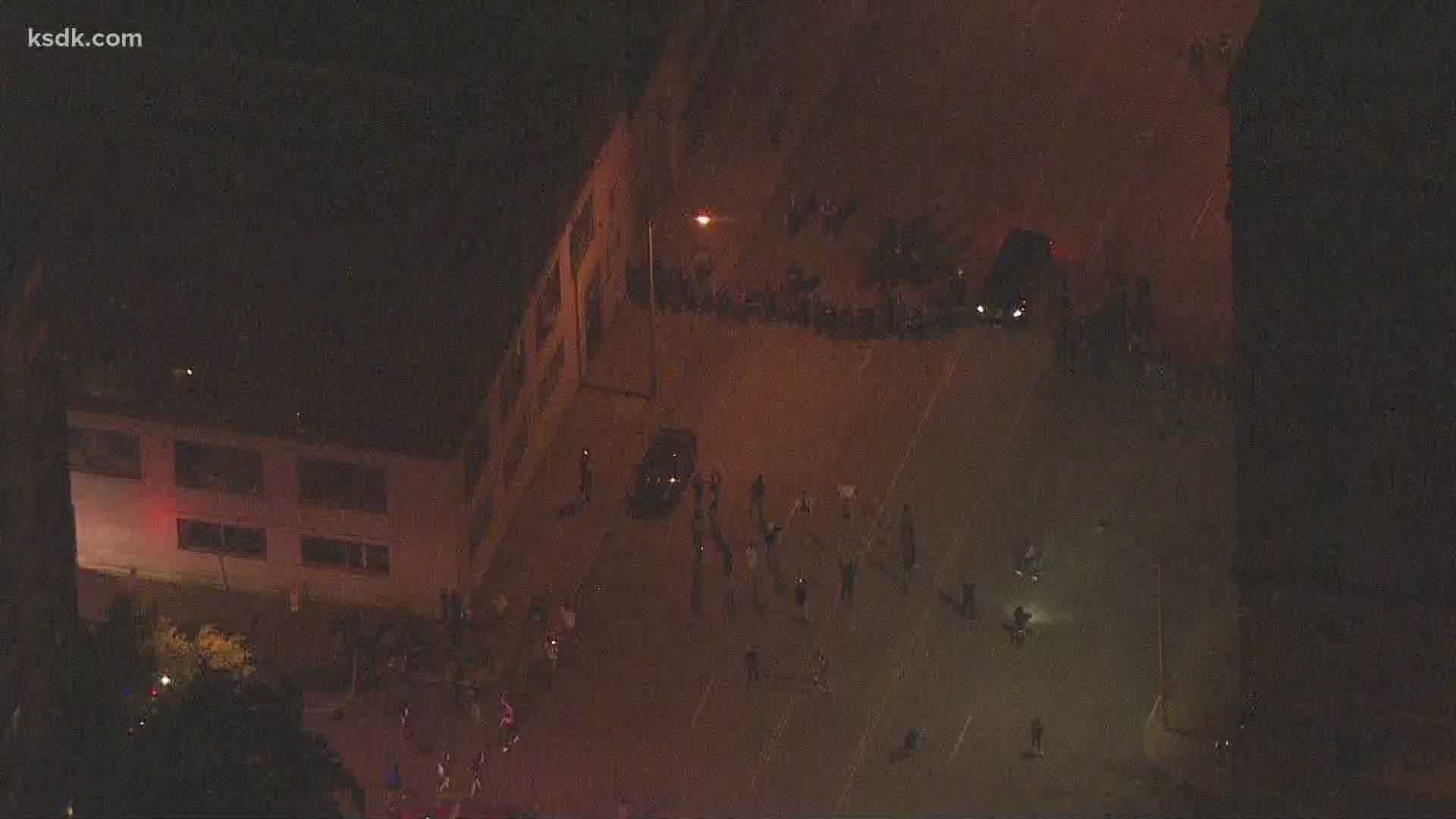 Violent riots were still happening in the city into the early morning hours Tuesday.

“Officers are still taking gunfire downtown," Woodling said in her email update to the media just before 1 a.m.

"As we speak, we’re trying to get control of the city. Still hearing gunfire and everything," Chief Hayden said during his update at about 2 a.m.

Police said the officers were shot somewhere between 15th and 16th streets at Olive. That's about four blocks from police headquarters.

Police remained stationed throughout the larger downtown area, including at Olive and Jefferson, as seen in the photo below.

Peaceful protests give way to looting, fires and violence near downtown St. Louis

Protests over the death of George Floyd in downtown St. Louis started peaceful Monday — and continued that way for five hours with a crowd of about 1,000 people. But as the sun set, a small group of agitators began getting violent toward police.

Over a few hours with a couple dozen rioters, a 7-Eleven burned, at least one police car was damaged and fireworks were thrown at officers.

The mood shifted downtown at about 8 p.m.

At about 8:30 p.m., police were seen running out of police headquarters to form a line on Olive Street as a small group of protesters walked up to the building.

Rioters threw several fireworks at police officers, with some of them going off within feet of officers. 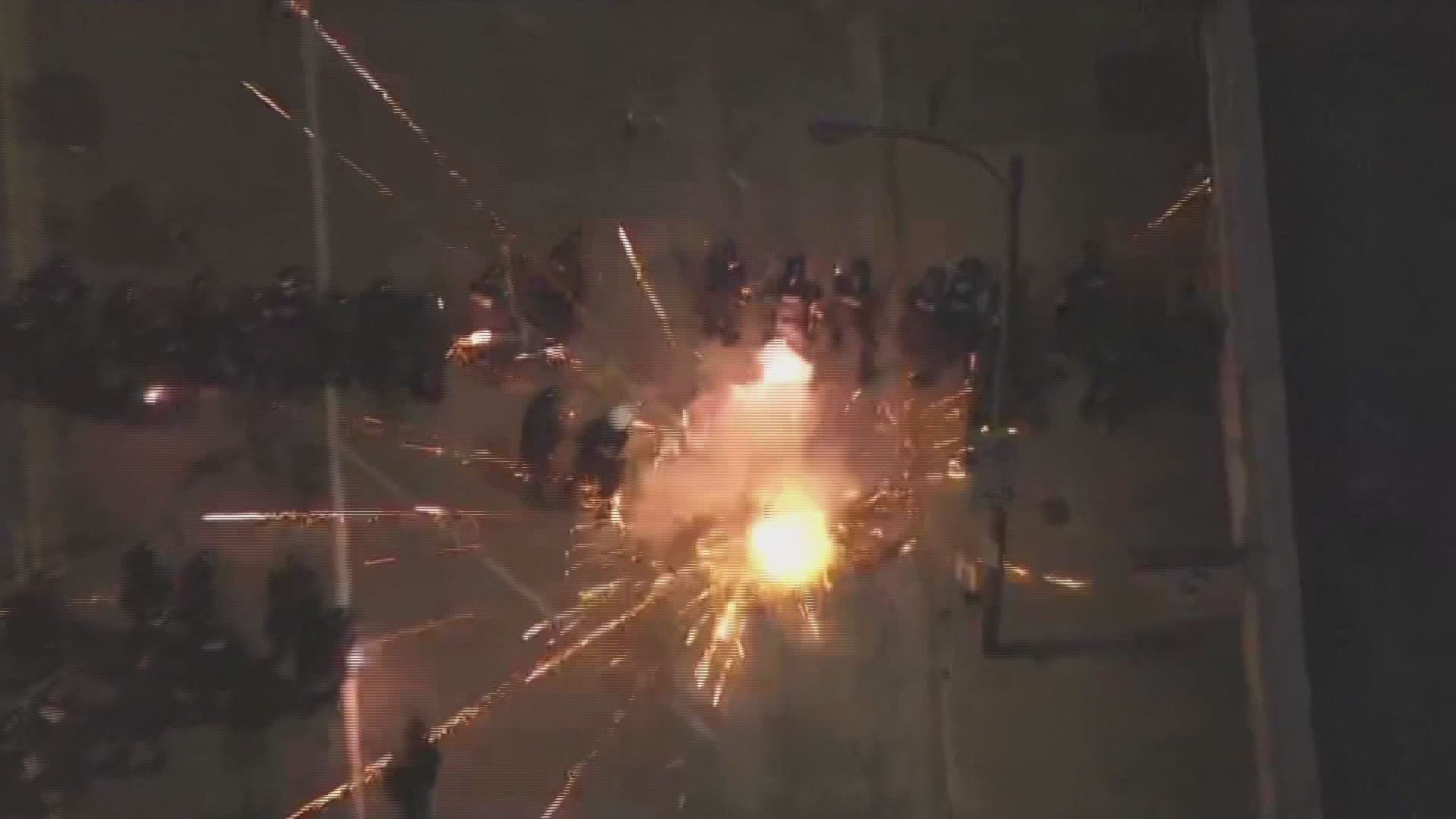 At about 8:55 p.m., police threw several tear gas canisters into the crowd. Protesters quickly scattered throughout the streets in downtown.

5 On Your Side's Jenna Barnes was in the area at the time. She reported hearing police warn the crowd using a loudspeaker that if they did not leave the area, tear gas would be used.

Then by 9:30 p.m., rioters had made their way down to a 7-Eleven store at 17th and Pine. Sky5's camera showed the store's windows had been busted and looters were running out of the business with items in their hands.

A rioter was seen throwing a firework into the building. It exploded and then moments later, smoke started billowing out. Flames quickly spread inside the business as rioters ran away from the area.

Firefighters arrived and put out the fire. They also responded to a small fire in the middle of the street a couple blocks away from the 7-Eleven. 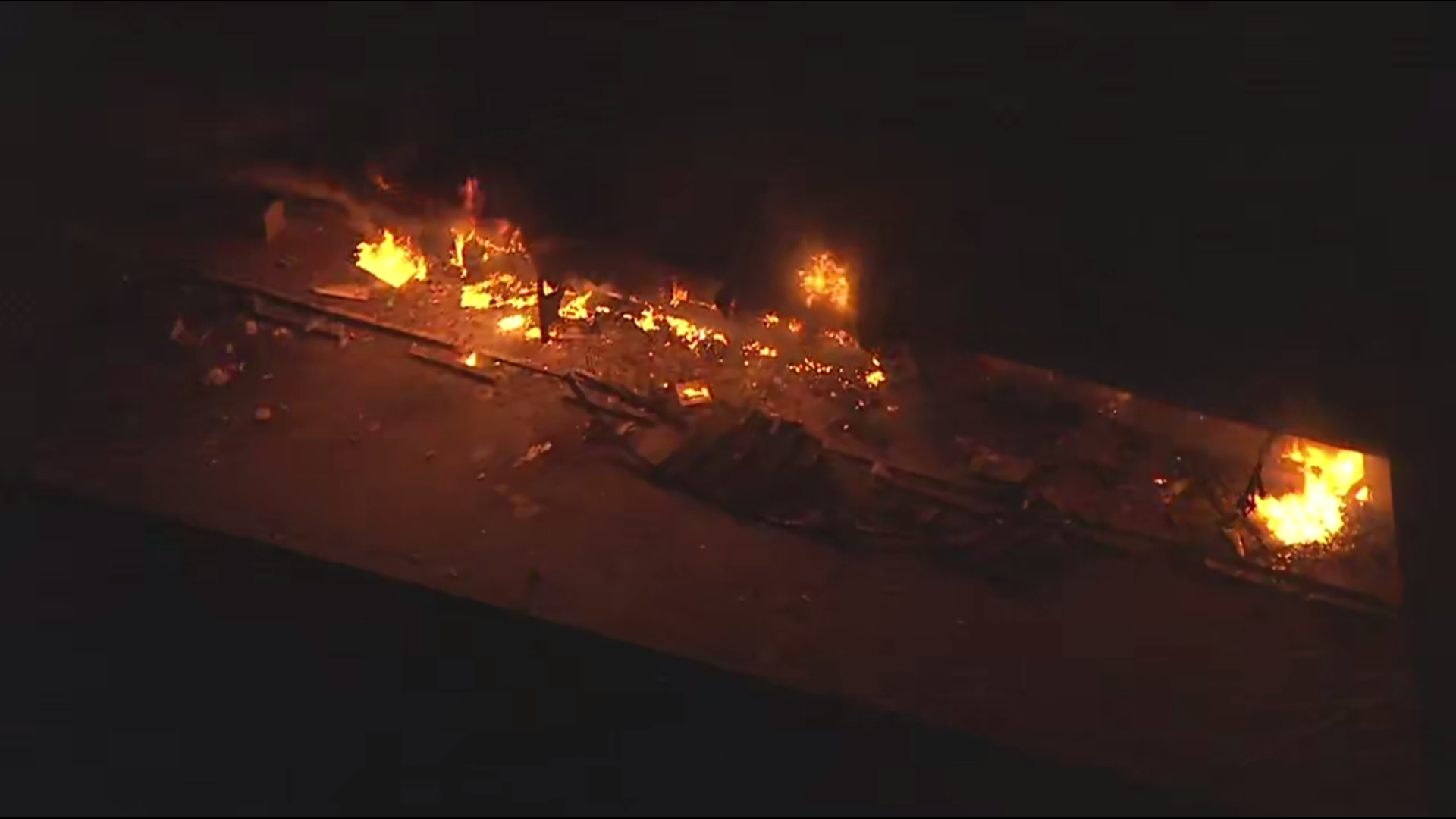 About a block away from the 7-Eleven, a couple dozen protesters were seen standing in front of a line of police officers who were blocking the street. The officers are elbow-to-elbow in a line across the street while wearing full riot gear.

Police continued to hold the line and pushed toward the crowd to get them to break up.

'Can we make some sense out of this?' | Emotional police chief pleads for answers after 4 officers shot in St. Louis

St. Louis’ top cop got emotional while searching for answers about the violence that’s hitting the city and communities around the country following the death of George Floyd in Minneapolis.

“There’s a pit in my stomach. I’m stunned. We need to pray for our city and pray for these officers,” Chief John Hayden said early Tuesday morning.

Four St. Louis police officers were shot while working during protests that turned into riots Monday night. All four are expected to survive.

“Some coward fired shots at officers and now we have four in the hospital. But thankfully, thank God they’re alive, “ Chief Hayden said, getting choked up and holding back tears.

“Can we make some sense out of this?" he pleaded. "That’s all I’m trying to say.”

Hayden described the agitators who turned a peaceful protest violent as “crazy people” who were hyping up the crowd. He said they threw rocks, bottles, fireworks and gas at officers.

“I don’t understand what that has to do with Mr. Floyd’s death,” the police chief said, exasperated. “Mr. Floyd’s death is tragic. But can we make something out of these kids coming down here and just started like crazy, jumping up and down, high fiving each other, flourishing pistols. I don’t know what else to say. This is horrible.”

Hayden said that smaller crowds of agitators had no intention of doing anything constructive, unlike the much larger peaceful crowd that marched through the downtown St. Louis area earlier Monday.

“What does stealing have to do with any of this? Folks came down there just to steal, just to destroy property and just to hurt officers. That was the purpose of them coming. I’m not processing that,” he said.

Looters smashed out the windows of a 7-Eleven near 17th and Pine, just a couple blocks from where the officers were shot. One rioter threw a firework into the convenience store and moments later smoke started billowing out of the business. Within seconds, the store was on fire.

“I can’t describe my emotions. I just know I don’t understand what’s going on. Innocent officers being shot at,” he said to reporters.

"The police officer shootings in St. Louis overnight are despicable. My prayers go out to the officers and their families. And my heartfelt thanks goes to them as well. These officers, and thousands more around our state, choose to put their lives on the line every day, and every night, to protect the neighborhoods we call home. The perpetrators who attacked them last night must be brought to justice. And we must bring order to our cities and towns now. Violence threatens to destroy the fabric of our communities and undermine our ability to live and act together. Every American has a right to assemble and protest peaceably, but mindless violence is not protest, it is further injustice that harms us all."

Latest on protests in the St. Louis area: