Meet the pooch from our area getting ready to strut her stuff on a national stage. 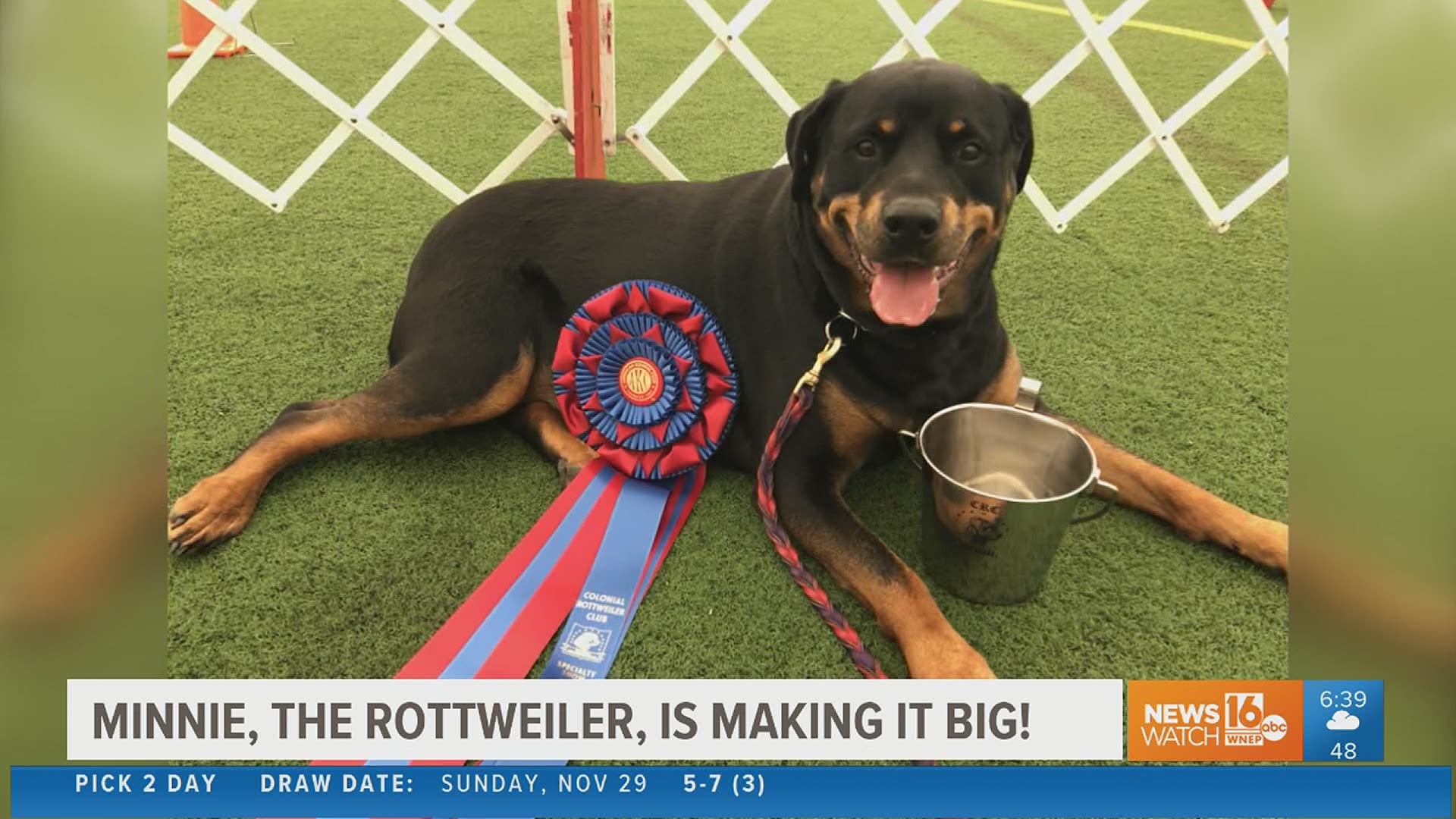 LACKAWANNA COUNTY, Pa. — She may look a little intimidating at first, but apparently, this 120-pound Rottweiler named Minnie is just one big cuddle bug.

At 6 years old, Minnie the Rottweiler from Lackawanna County is about to make it big time.

"This is the national championship. So it's the best of the best." Minnie's mom, Anne Marie Frano is talking about an event called "Rally," organized by the American Kennel Club.

After winning various competitions throughout the year, the pair from the Clarks Summit area got the invite to the national event. It takes place on December 11 in Orlando, Florida.

"This was actually supposed to happen in June in Ohio and because of COVID, it got moved," Frano said.

"Rally" is a sport that encourages teamwork among all breeds of dogs and all ages of handlers. The event takes each dog and its handler through an obedience course of sorts that involves varying degrees of difficulty. It's different than say the Westminster Dog Show, which is more of a beauty pageant.

"It's a numbered course. And you go through the course and do whatever the signs tell you," Frano said.

The competition also gives Minnie and her mom a chance to show the nation just how smart, friendly, and responsive Rottweilers can be since they sometimes get a "ruff" rap.

"When we started, people thought Rottweilers don't really compete, and I was actually told that by a couple different people like that, it's not their thing, they just don't do it, and Minnie does absolutely anything I ask of her. She likes to be a part of everything," Frano said.

That includes using her talents to spread smiles to others around the Scranton area as a certified therapy dog. When Minnie's not training for competitions, this pooch often brings smiles to hospice patients, students, and groups at local libraries.

"She's a big snuggler, she likes to put her head on everybody's lap and she likes to let kids sit on top of her…all over. And she doesn't care. She just loves people," Frano said.

Minnie has a brother named Axel. Is he jealous of her success?

"He is not he all jealous. Axel is a supportive little brother who loves his sister," Frano said.

And as Minnie prepares for that road trip to Florida her mom knows this competition will be a lot different. The American Kennel Club has changed things up because of the pandemic.

"They are working a lot to try and make accommodations for COVID," Kim Van Hemert, a delegate to the AKC for the Lackawanna County Kennel Club, said.

"Basically the AKC has set it up that you will walk into the building, compete and then leave the building. In the past, it used to be a social gathering. it is actually now just what they call a "show and go," Van Hemert said.

A show and go that'll put Minnie from the Clarks Summit area in the national spotlight and hopefully earn this Rottweiler another ribbon.

It's a stereotype this calm, cool, and 120-pound canine hopes to change one smile at a time.

And if you'd like to learn more about the A-K-C's "Rally" events or even find a local kennel club where you live that offers training and organizes competitions in our area, Newswatch 16 has more information right now at wnep.com/websites.

So many really consider these types of events such a great bonding experience that people can share with their pets.