Reasons to Smile: how our pets choose us

Many pet parents have often said: we don't choose our pets; they choose us. For one Bradford County woman, her Goldendoodle is the one who rescued her. 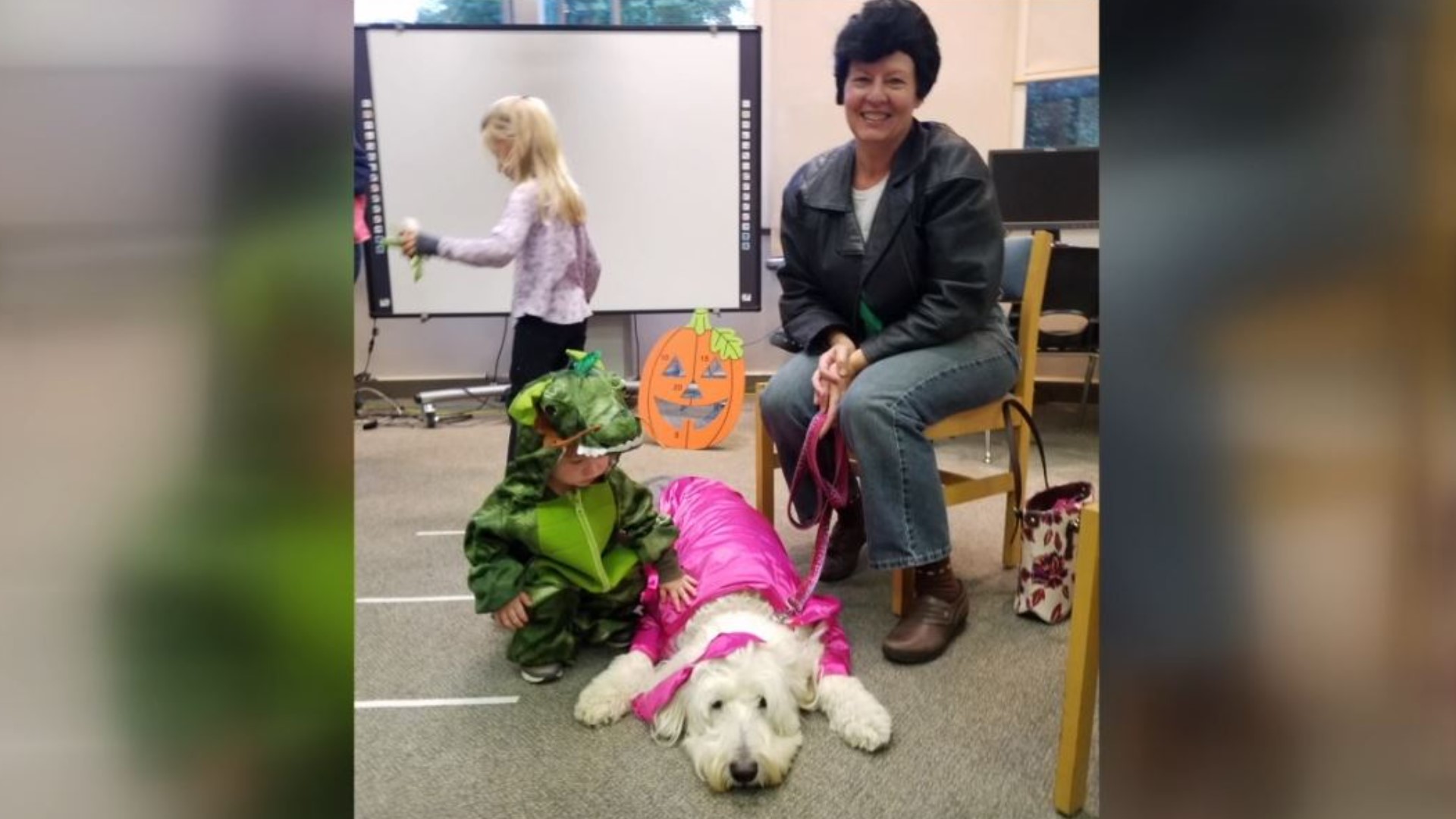 TOWANDA, Pa. — For anyone who’s been out and about in the Towanda area, it’s a pretty safe bet they’ve probably run into one cuddly creature at stores, local libraries, and then some!

She’s a therapy dog named Mellie. But it’s not her work or her eye-catching outfits that really got our attention.

Mellie’s an 11-year-old Goldendoodle who basically has her own staff. After all, this pampered pooch is quite the head-turner in Bradford County.

“She has a seamstress. She has a groomer because you know, you have to look good,” said Karen Stroud.

Especially if you do as many public appearances as Mellie does in and around Towanda. While her work as a therapy dog in nursing homes and even helping kids with their reading over the years is certainly commendable, it’s how Mellie found her way to Karen Stroud that really makes this canine so special.

“I got to hold her as a little puppy and I was crying,” said Stroud.

Mellie, just two weeks old at the time, clung to Karen Stroud. A first encounter that became a saving grace for Karen after she suffered the pain of losing not only her dad but also her younger sister,  both within a matter of months.

“My sister, Melanie, who she is named after, passed away in 2009,” explained Stroud.

The two siblings were very close. Karen says her sister, Melanie Spencer, worked for years as a surgical technician at a hospital in Bradford County, but Melanie later moved out of town and eventually lost her ongoing fight with an addiction to alcohol.

“She had moved to New Orleans. My sister, she was ill,” added Stroud.

Karen’s sister Melanie died on April 19, 2009, which was also the exact same day when Mellie the Goldendoodle was born.

“We were all looking for signs,” said Stroud. A sign that crawled onto Karen’s lap the day her job at PS Bank just happened to send her out on a special assignment.

“I was asked to go to this kennel in Rome where the owner was having issues with their credit card machines,” said Stroud.

Also, at that kennel was a litter of Goldendoodle puppies.

And one of the 11 stood out and brought tears to Karen’s eyes when she learned her soon to be pooch Mellie came into this world the same day her sister left it.

“I told the whole story to the owner and I end up picking her out,” explained Stroud.

Now almost 12 years later, Mellie and her pet parent are just as inseparable as Karen was with her sister Melanie.

“We dress up every Halloween in my sister's memory because she loved Halloween,” said Stroud. “She gets petted and we hear stories.”

Stories that often remind Karen of the day Mellie chose her, creating a bond that is now helping others.

“This woman just lost a family member and she came up to me and she said, ‘May I pet your dog?’ She said, ‘oh, I needed this.’ You don't know what people are going through you.”

But somehow, Mellie always does, call it her canine intuition. After all, this wardrobe wearing wager chose Karen during some of her darkest days. It not only lifted Karen up, but has also given so many others who this pooch has crossed paths with a reason to smile.

“It gets to your heart and it brings tears to my eyes, actually,” said Stroud.

Although Karen and Mellie haven’t been able to visit nursing homes and libraries because of the pandemic, the pair has done a few Zoom calls with local organizations to spread smiles.