From PA To LA, a Hollywood-based company looks out for people in our area. It's the focus of this installment of "Reasons To Smile" with Newswatch 16's Ryan Leckey. 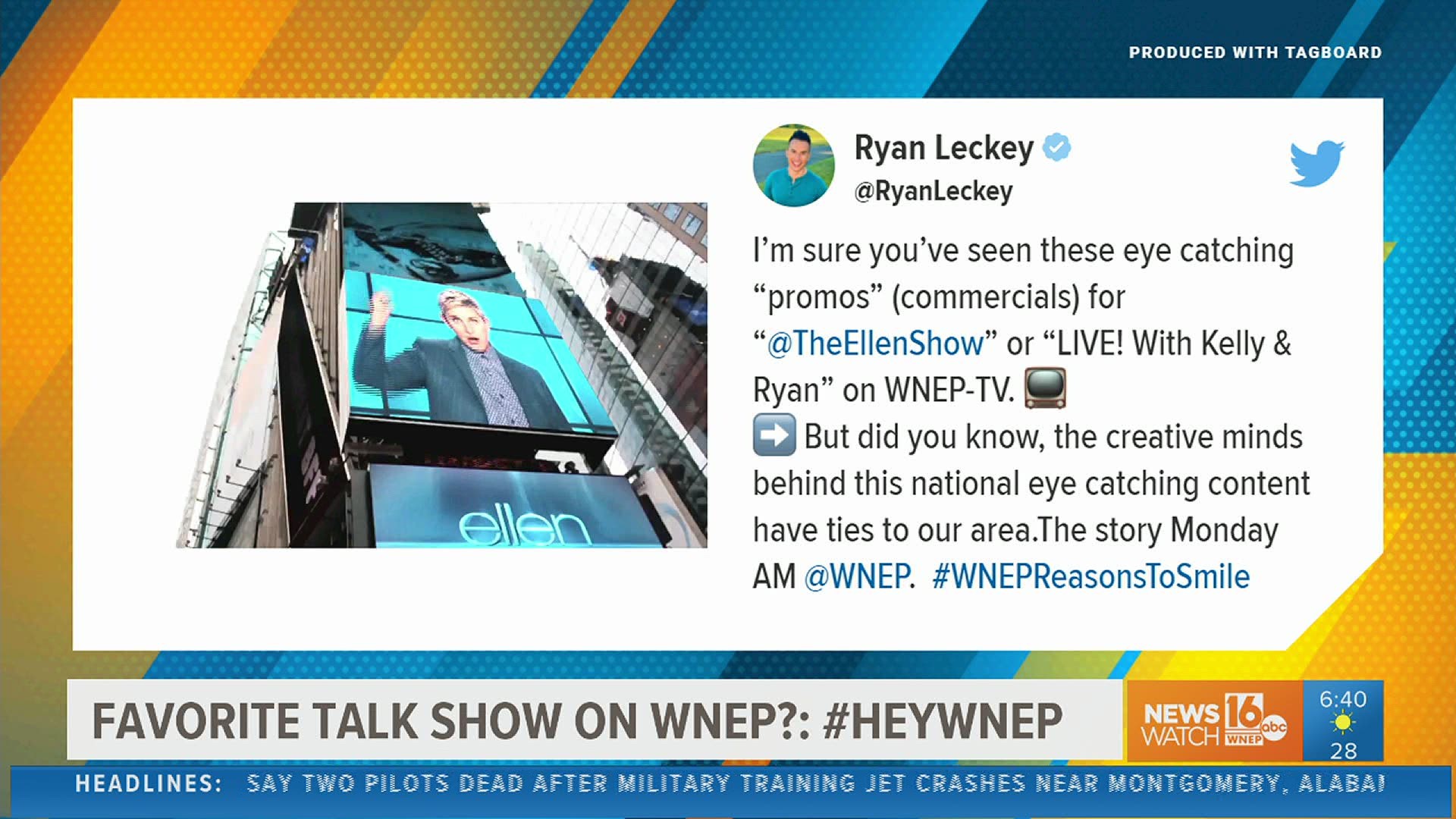 People in and from our area are known for having each other’s backs. Another example of this is how a Hollywood-based company, “Studio City,” never forgot its roots.

The Marketing Agency, which just celebrated its 25th anniversary, has made it its mission to help creative minds from our area achieve their dreams in Tinsel Town.

From PA to LA, with a few career stops in between, it’s a journey worth celebrating for Stu Weiss, Joe Tamanini, and Bill Hetler. The three men are all part of a media company called “Studio City.”

All three have strong roots in northeastern and central Pennsylvania.

Stu said, “Born in Brooklyn, but we moved to Pennsylvania, to Scranton, when I was 13.”

“It's been an incredible journey from Milton to, you know, the president and this chair at Studio City,” said Joe.

As for what "Studio City" is all about, Joe explained what they do:

“We’re a company that creates essentially trailers for television shows,” he said. “We’re taking an hour-long worth of television programming and boiling that down to 30, 15 , 10 , or five seconds.”

It’s all thanks to a team of creative minds who make those fast, flashy national television trailers or promos. The spots are often put together in just a few short hours right after episodes are recorded. The shows include some of your favorites here on WNEP-TV including “The Ellen DeGeneres Show” and "LIVE with Kelly and Ryan."

“I had to represent I had to,” explained Bill wearing a Dunder Mifflin shirt.

After all, Dunder Mifflin is the fictional paper company in the TV show “The Office” that helped put Scranton on the map.

“These are my people,” said Bill.

Remembering "their people" is always a priority for company founder Stu Weis. He continues to hire creative firepower from our area, helping people from this part of Pennsylvania achieve their dreams in the entertainment industry.

“There is clearly something in the water in Wilkes-Barre, Scranton, in northeastern Pennsylvania. I was given a chance,” said Stu. “And I so appreciated that.”

Ryan asked Stu, “How many people did you start with, Stu? And how many folks do you employ right now?”

“We started with four people and eight milk cartons to set the computers on. We couldn't afford desks,” explained Stu. “We’re now over 70 people.”

That includes several from our area who look out for one another, whether it’s in Tinsel Town or the Big Apple.

“It takes a thick skin. It takes some motivation. And I think, you know, my upbringing in Berwick is definitely helping me with that,” added Bill.

All three of these guys still have family and even some property in our area. For Studio City’s President Joe Tamanini, his mom Teresa Meisinger, remembers the day her son left central PA to become Stu’s intern.

“I mean, it's heartbreaking to see him pack up his car and drive to California to do his internship with Studio City. But he just went out there and proved himself and went up the ranks,” said Teresa. “He’s always remembered where he came from.”

“I wouldn't think I would have gotten that far had I not had the beliefs of Stu behind me or others or family members or friends who were kind of really rooting me on that entire time,” added Joe. “It's really been tremendous.”

Success stories fit for a Hollywood blockbuster - built on our area’s values and work ethics. A place where people always have each other’s backs.

In addition to promos, the company has also produced entire TV shows like A&E’s "Hoarders" and other shows on HGTV.

Stu, the company’s founder, actually says he fell in love with the world of television growing up watching WNEP-TV, with our old shows “Bowling for Dollars” and the “Dialing for Dollars movies” where we literally raced Gerbils on TV and viewers would call in to pick the winner.

Stu says his next big dream is to own a house on Arthur Avenue near Scranton’s Nay Aug Park.

Finally, with all the success with technology during the pandemic, Stu says he’s constantly looking for talented people from our area to join his company.